But of course, when ‘we go low’ … ‘they go high’. Just ask Michelle and Hillary.

Here’s a look at what ‘going high’ looks like.

ESPN — which, like Roseanne’s old network,  is owned by Disney — seems to have a different threshold for what kind of speech or behavior is ‘beyond the pale’.

Keith Olbermann — remember him? He’s the guy who was booted from ESPN shortly after picking a fight with Penn State.

He was suspended and booted from a number of shows, for various reasons — including violating his company’s political donation ethics regulations.

In one instance…he was replaced with none other than Elliot Spitzer.

The last thing ABC stands for is supporting someone who tweets awful things… Now over to Keith Olbermann with sports… pic.twitter.com/bEXprawPtJ 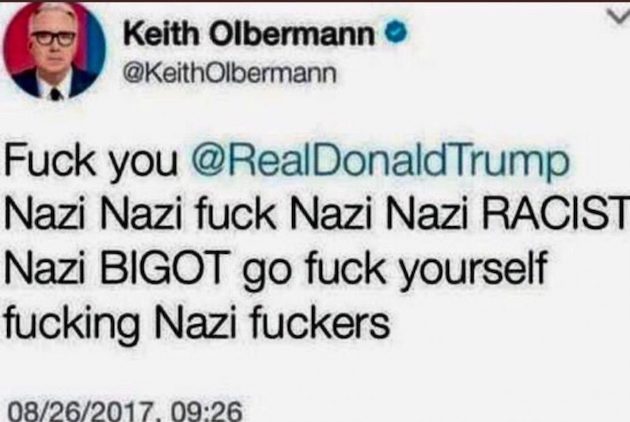 He ran a web series called ‘The Resistance’ where he routinely got so wound up over the ‘certainty’ of Trump’s coming impeachment that he made CNN and MSNBC seem objective by comparison.

Here is one episode, ‘Donald Trump Is F*cking Crazy’:

That was back in November 2017… when he called the fight over, because, he claimed, Trump was finished.

Trump Is Finished was actually the title.

Within a day, one single, solitary ‘hateful’ tweet from Roseanne left the entire team unemployed, and reruns of that show harder to find than the Duke boys outrunning Boss Hogg (no, not David) in the General Lee.

The top dog in the company denounced the tweet.

And yet… Olbermann’s got a job.

No wonder so many people are ‘cutting the cord’ on their cable packages.

Are you running out of patience with the programming on cable?