There is so much wrong here — where do you even begin? Check out the ridiculous reason that Stormy was chosen.

Time magazine explained how the now-famous Stormy Daniels was once depicted as the Virgin Mary in a photo shoot by artist Nika Nesgoda in the early 2000s.

When noting that Nesgoda’s printer initially refused to print the photos, the magazine couldn’t help but take a jab at President Trump and the Christians that support his agenda.

But let’s backtrack a bit to the opening of the story.

Sixteen years ago, artist Nika Nesgoda made a series of Cibachrome photographs, in which — taking a page from Caravaggio — she recreated iconic paintings of the Virgin Mary using adult film actors as models. There was no way she could have predicted that she’d wake up one day to find that one of her former models, Stormy Daniels, was at the center of a political, cultural, legal maelstrom that could alter the course of American presidential history, or at least the cold open of Saturday Night Live.

Unless you’re concerned about *cough* ‘cross-contamination’.

And what about Stormy Daniels? A makeup artist recommended her for the project and Nesgoda remembers him saying, “You’ve got to put this woman in one of your pictures — she’s magical on film.” When Stormy, whose real name is Stephanie Clifford, arrived at the studio, she seemed quiet and studious — just taking it all in.

Nesgoda thought Stormy had the elusive quality necessary to recreate a famous Annunciation scene from a 1333 Italian altar painting by Simone Martini and Lippo Memmi. In it, the Virgin Mary looks “intelligent and as though she’s seen some things,” says Nesgoda. “Stormy’s eyes carry a lot of depth, which was perfect for this image. I was struck by the timelessness of her beauty. She really looked like she could have stepped out of the 14th century.”

According to the Tampa Bay Times, Daniels/Clifford had breast implants to look like Pamela Anderson, and ‘Hopes when she gets to Heaven, God says, “Nice t-ts.”‘

Also, good luck with that.

Nesgoda sais that she was told that Stephanie Clifford aka Stormy Daniels is allegedly ‘magical on film’? Is that what you look for when you’re looking for a model to portray Mary the Mother of Jesus?

Here is the original artwork by Simone Martini painted in 1333: 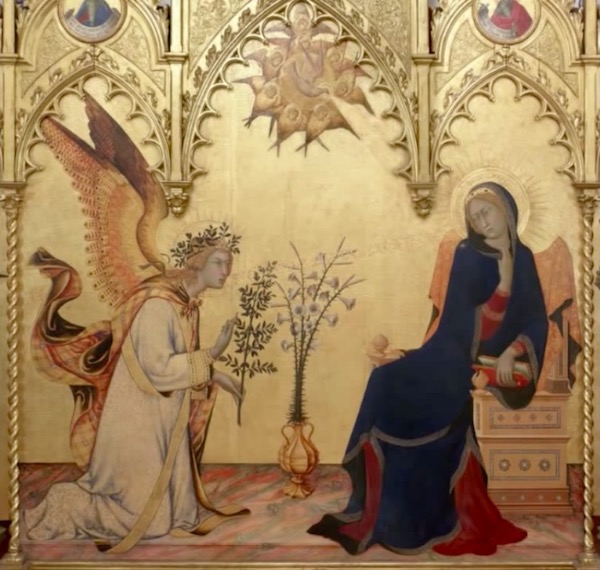 Here is the photo of Clifford recreating that: 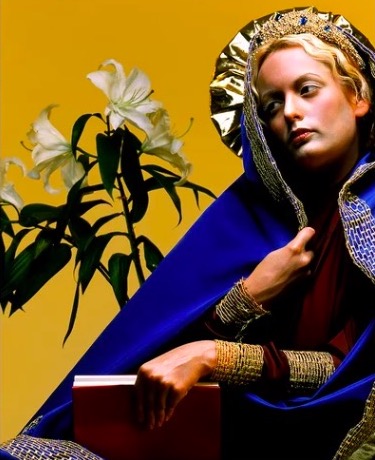 Here’s a closeup of Mary in the painting: 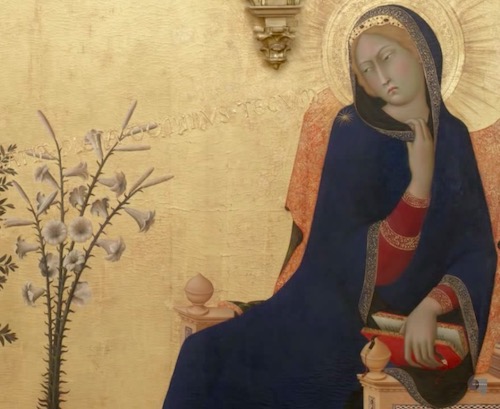 Watch an explanation of the symbols used in this work of art: