Wait a minute… did that say REUTERS??? Wow! That’s not exactly a Pro-Trump outfit.

Democrats weren’t counting on them for a ‘Blue Wave’ in November, were they?

If they were, they’re about to be profoundly disappointed.

Two years ago, young white people favored Democrats over Republicans for Congress by a margin of 47 to 33 percent; that gap vanished by this year, with 39 percent supporting each party.
Source: DailyMail

That’s good news, of course. Just not for THEIR team.

The online survey of more than 16,000 registered voters ages 18 to 34 shows their support for Democrats over Republicans for Congress slipped by about 9 percentage points over the past two years, to 46 percent overall. And they increasingly say the Republican Party is a better steward of the economy.

Although nearly two of three young voters polled said they do not like Republican President Donald Trump, their distaste for him does not necessarily extend to all Republicans or translate directly into votes for Democratic congressional candidates.

That presents a potential problem for Democrats who have come to count on millennials as a core constituency – and will need all the loyalty they can get to achieve a net gain of 23 seats to capture control of the U.S. House of Representatives in November.
Source: DailyMail

The “Better Steward Of The Economy”.

The irony is delicious: 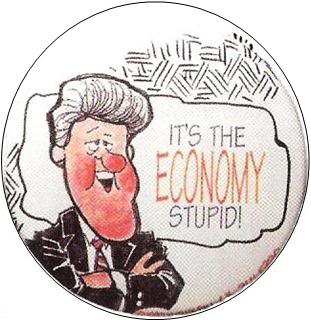 Maybe voting against those ‘crumbs’ of tax cuts was actually a dumb plan, Nancy!

They dropped nine points. That’s a big deal, isn’t it?

They’re willing to be won over.

And young people are noticing that there are more jobs than there used to be. Going by the Reagan definitions of how to measure an economy, that’s a big deal.

Under Trump, with record-setting employment numbers, ‘you’ and ‘your neighbor’ just got their jobs back. And the guy who presided over the slowest recovery since WWII ‘just lost his’.

What are real-live voters saying?

‘It sounds strange to me to say this about the Republicans, but they’re helping with even the small things,’ Hood said in a phone interview. ‘They’re taking less taxes out of my paycheck. I notice that.
Source: DailyMail‘

Terry Hood, 34, an African-American who works at a Dollar General store in Baton Rouge, Louisiana and took this year’s poll, said he voted for Democrat Hillary Clinton in the 2016 presidential election.
Source: DailyMail

Here’s another example that will keep Dem strategist

Ashley Reed, a white single mother of three in New Hampshire, said a teenage fascination with Democrat Barack Obama led her to support his presidency in 2008. But her politics evolved with her personal life.

Reed, now 28, grew more supportive of gun rights, for instance, while married to her now ex-husband, a U.S. Navy technician. She lost faith in social welfare programs she came to believe were misused. She opposed abortion after having children.
Source: DailyMail