When the Left is finished ‘fundamentally transforming’ it, the Jamboree is going to look like the Burning Man festival.

The Boy Scouts lost about one-fifth of their membership when this group dropped them like a hot potato. Wow! Look Who Just Dumped The Boy Scouts

If anyone was actually wondering why they walked the Scouts could not possibly have underscored the reason more clearly:

The Jamboree in 2019 will be handing out condoms. Perhaps it’s fortunate the organization’s founders didn’t live to see this day arrive.

The World Organization of the Scout Movement (WOSM) released its health and safety guidelines for the World Jamboree to be held at the Summit Bechtel Reserve in West Virginia July 22 through August 2, 2019.

The guidelines require that host organizations, who in this case include the former Boy Scouts of America (now Scouts BSA), “… ensure that condoms are readily and easily accessible for all participants and IST [staff] at a number of locations on the site. Heads of Contingent must be informed in advance and made aware of their responsibility in communicating this policy to their Participants, Unit Leaders, Contingent Staff, and IST in an appropriate way.” (See Guideline 7.3 on page 10 of the document.)
Source: Charisma

What is not as readily obvious is the answer to the following question: Are those condoms being provided as a result of the group now being opened up to female Scout participants, are they offered as a concession for the homosexual male scouts, or are they intended for the “leaders” and …

Yeah. For some reason, the group’s reputation as a ‘wholesome’ organization is changing. Imagine that.

The Mormons aren’t the only group setting up an alternative to the Boy Scouts movement.

Outside the convention after the vote, Stemberger held a press conference announcing that a meeting would take place in Louisville, Kentucky to organize a new scouting movement. The FFPC raised funds, organized and brought leaders from various denominations, family groups and former BSA leaders together in that meeting in June of 2013. From this gathering a Christ-centered youth adventure program was birthed, and a volunteer board of directors was chosen. A national convention was held in Nashville, Tennessee where the name, logo and program elements were rolled out. Over 1,200 leaders were in attendance at the June 2013 meeting where Governor Mike Huckabee and Michael Farris were featured keynote speakers.

In 2016, Trail Life USA inherited a handsome 127-acre property outside of Greenville, SC which contains offices, residential cabins and campgrounds to be used to house the organization’s members and its staff. Both the property and the organization are debt free.

The program focuses on outdoor adventure, character, and leadership and now has over 750 troops in 48 states.
Source: FLFamily

Maybe the public reaction to the announcement of their change to co-ed status wasn’t out of line after all: 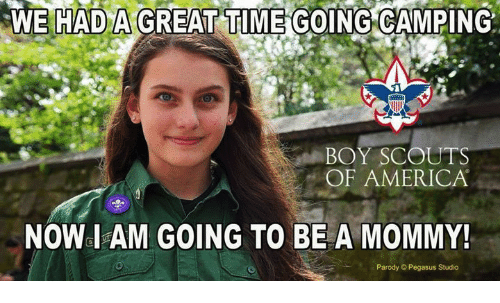 What's your reaction to the Scouts handing out condoms?