What’s the next step after this?

You may have heard by now that the Press Secretary was denied service at a restaurant recently.

Notice, it was Lexington, not any restaurant of any similar name elsewhere.

Last night I was told by the owner of Red Hen in Lexington, VA to leave because I work for @POTUS and I politely left. Her actions say far more about her than about me. I always do my best to treat people, including those I disagree with, respectfully and will continue to do so

The owners of the restaurant stood proudly in a photo with those ridiculous knit pink hats.

The President tweeted about the incident, no surprise there.

The Red Hen Restaurant should focus more on cleaning its filthy canopies, doors and windows (badly needs a paint job) rather than refusing to serve a fine person like Sarah Huckabee Sanders. I always had a rule, if a restaurant is dirty on the outside, it is dirty on the inside!

And other nearby restaurants with similar names are distancing themselves from the situation and making clear that they are unaffiliated with the restaurant in question.

Businesses in DC are prohibited from discriminating against people for political affiliation because we are a federal district. We have patrons from both sides of the aisle: https://t.co/IOmNmYqoj5

Have a look at the thread to see just how hard people pushed in the ‘with us or against us ‘ bullying. Good for them for not caving to the pressure.

@PressSec This is the sign in the window of the Red Hen Restaurant in Lexington VA.
Liberal Hypocrisy at it’s finest! ???????????????? pic.twitter.com/7et1c2zBLK

Hardcore leftists want their crowd to rally around that restaurant in much the same way crowds rallies around Chick-Fil-A some years ago.

Those who don’t like the precedent of ‘we don’t serve your kind here‘ entering our workplace have a choice to make. Will we double down on the partisanship that is becoming commonplace, or will we take the ‘high road’?

Milo was driven out of a restaurant in New York by angry leftists.

Government Employees from the DOJ drove out the DHS Secretary from a restaurant as part of an angry protest.

And now business owners are kicking people out of their restaurant.

At least the last one has legitimate authority to make that decision. The other two are literally ‘mob rule’.

For all the preening about how the right goes low, but the left goes ‘high’… it’s a load of crap.

First they define everyone they disagree with as ‘evil’.

Next, they treat them as unworthy of respect or civil discourse.

The distinctions between mainstream leftists, and Antifia rioters are getting dangerously thin.

So, do we trade punches with the leftists, launching active boycotts against business allies to ‘the Resistance’?

Should each side be trying to bankrupt the businesses the other side backs until someone cries uncle? That’s a Mutually-Assured-Destruction tactic. Some endorse that as a tactic to keep the bullies on the other side honest.

As one Yelp commenter suggested: 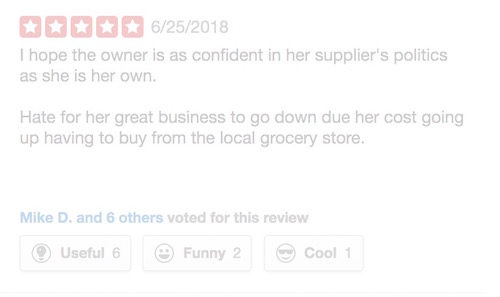 Just understand that there will be casualties in an exchange like that.

Do we hit their ‘yelp’ page with comments? That’s another option, but don’t expect that any comments made in the next few days will make a difference:

“This business is being monitored by Yelp’s Support team for content related to media reports.” Yelp page

Or do we make a mental note to ourselves to avoid people hostile to ourselves, and follow example of being decent, even to those who are indecent to you.

Which we could do by, you know, actually living out the moral high road Michelle and Hillary pretended to prefer… going high when the other side goes low — in REAL life, not just on camera.

It could be that all this outrage will be driving the sane voters away from the increasing extremism taking hold of the Democrat base.

What is the right response to the Red Hen throwing out Sanders?

“A gentleman from Nacogdoches, in Texas, informs us, that, whilst there, he dined in public with col. Crockett, who had just arrived from Tennessee. The old bear-hunter, on being toasted, made a speech to the Texians, replete with his usual dry humor. He began nearly in this style: “I am told, gentlemen, that, when a stranger, like myself, arrives among you, the first inquiry is – what brought you here? To satisfy your curiosity at once to myself, I will tell you all about it. I was, for some years, a member of congress. In my last canvass, I told the people of my district, that, if they saw fit to re-elect me, I would serve them as faithfully as I had done; but, if not, they might go to h__, and I would go to Texas. I was beaten, gentlemen, and here I am.” The roar of applause was like a thunder-burst. [Louisville Journal.