Roseanne lost her job after her completely inappropriate Tweet about a former Obama advisor. Will Samantha Bee lose hers for her on-air nasty name-calling of Ivanka Trump?

President Trump weighed in on Samantha Bee’s nasty name-calling of his daughter. He’s calling for ‘no talent Samantha Bee’ to be fired from her ‘low ratings show’. He then said that there was a ‘total double standard’.

Why aren’t they firing no talent Samantha Bee for the horrible language used on her low ratings show? A total double standard but that’s O.K., we are Winning, and will be doing so for a long time to come!

Trump’s reference to a ‘double standard’ was likely a jab meant to remind Americans that conservative comedienne Roseanne Barr saw her sitcom cancelled and her agent fire her in a matter of hours after she sent a racist tweet this week.

But Bee’s a feminist, right?
Some big-name celebrities quickly came out to support Bee’s comments because… ya gotta Resist! 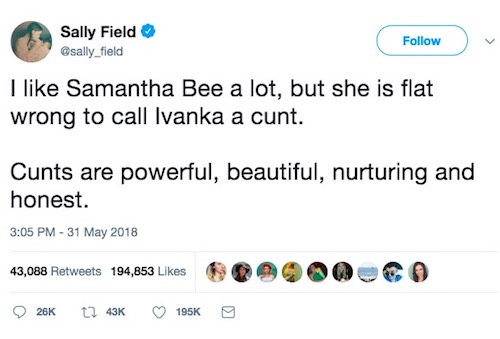 Really, Sally? Did you feel that way back in 2016 when Ann Coulter was called the same nasty word 19 times at the Rob Lowe Roast?
Ann’s been called the same name for years by the likes of:
Chrissy Teigen
Pete Davidson
Patton Oswalt
And a whole bunch of others.
It looks like it’s ok to call conservative women a ‘c-nt’.
Back to Samantha Bee…

And, of course, Ms. Resist herself, Kathy Griffin: 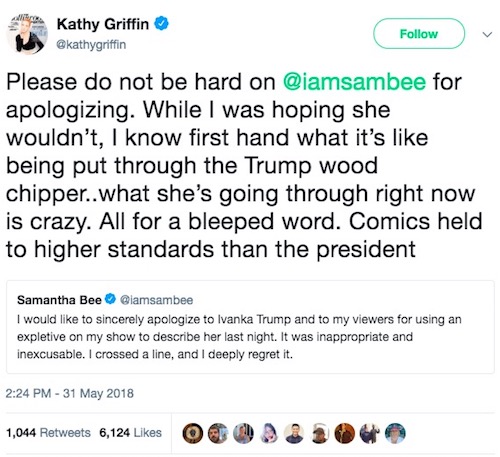 When the fit hit the shan, Samantha Bee did issue one of those standard canned apologies with some public relations-speak fake sincerity. 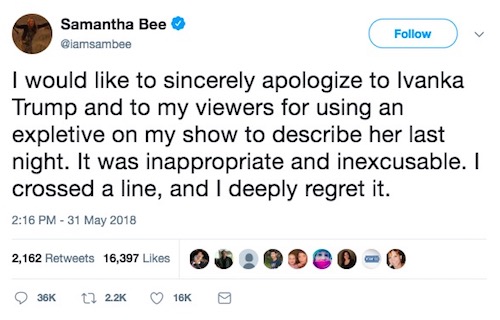 Oh, and David Hogg can be pleased that his ‘if you say something I don’t like we’ll boycott you‘ tactics worked like a charm in this case.

The comic apologized for the slur a day later, but only after sponsors began to withdraw their advertisements from her program.

Autotrader was the first to pull the plug.

Before the apology, White House press secretary Sarah Sanders called Bee’s language ‘vile and vicious’ and said executives at TBS and corporate parent Time Warner should demonstrate that they woun’t tolerate explicit profanity about female members of the administration.

Then, in a statement to The Wrap, State Farm discontinued their business relationship with Full Frontal.

“We have asked TBS to suspend our advertising in the program and are reviewing any future placements. We constantly review programs to ensure alignment to our programming guidelines and brand values.”

So, she’s lost a couple of big advertisers.

Samantha Bee has taken the right action in apologizing for the vile and inappropriate language she used about Ivanka Trump last night. Those words should not have been aired. It was our mistake too, and we regret it.

And that’s the crux of it.

The network is standing by her because Samantha Bee did it on-air after it was already vetted.

Had she just privately tweeted the slur, it would’ve been different. They could fire her.

Here’s the astute take from Sean Davis of the Federalist.

So, what do you think?

Should Samantha Bee lose her show over this?

Clash Poll: Should Samantha Bee Be Fired For Calling Ivanka A 'Feckless C**t?'