Whoa, Nelly! Leftists aren’t going to like this one for a bunch of different reasons… or is it just because of ONE reason?

In this anti-Trump era, if you wear a Make America Great Again hat, you can be attacked at a popular restaurant chain. If you work for the Trump administration, you can be refused service at a restaurant. You could be harassed by protesters, or have them gather in front of your home.

Heck, if you work for DHS, you might find a decapitated, burned animal on your front steps.

And if you’re President Trump, you’ll be called everything from a liar to literally Hitler. They’ll debate about the state of your marriage, your health, or publicly speculate whether or not your 10-year-old son is autistic.

Alleged comedians will create elaborate stunts and then withdraw their apology.

Your entire family is fair game.

That’s the Tolerant Left for you.

This bro is wearing a shirt to remind Leftists that Donald Trump has that ‘spark of divinity’ that Nancy Pelosi says we should all respect. 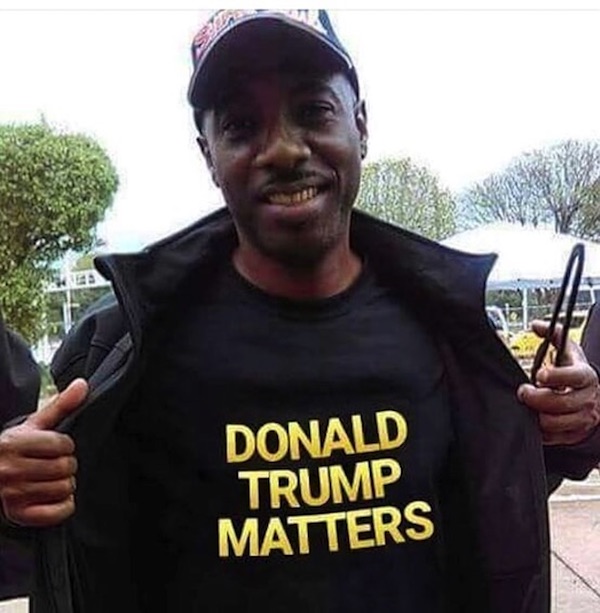 Let’s enumerate why the Left will really hate this shirt.

That smiling man happens to be black.

The smiling black man is wearing a shirt that is pro-Donald Trump.

That brings it all back to the single issue that Leftists are most upset about:

Donald J. Trump is the 45th President of the United States of America, Hillary isn’t — and America is all the better for it.