‘what does that mean to me and my life?’

If Nancy Pelosi is wondering why that ‘blue wave’ has been evaporating, she might want to look in the mirror.

In an effort to turn good news into bad news (because the one tool in her toolbelt seems to be ‘Trump Is A Monster, join us in opposing him’) Pelosi tried to put a negative spin on the jobs numbers.

We’re not sure it worked out the way she hoped.

.@NancyPelosi: "Hip hip hooray, unemployment is down. What does that mean to me and my life? I need a bigger paycheck." https://t.co/fKhYCwwIrp pic.twitter.com/uNlHZ2AcVY 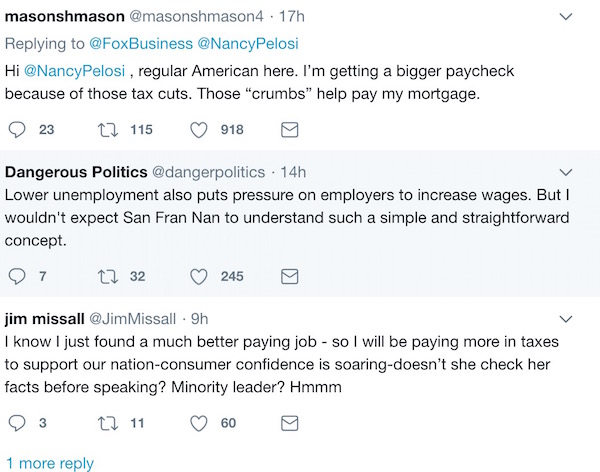 Are they regretting standing by this out-of-touch one-percenter as Minority Leader?

Nancy Pelosi may be one of the most liberal members of the U.S. House, where she runs the Democratic caucus, railing against income inequality and the avarice of the 1 percent. But she also happens to be one of the body’s wealthiest members: In Washington, she lives in a multimillion-dollar Georgetown condo; she owns a 16-acre vineyard in Napa Valley and a 3,700 square-foot house in San Francisco’s tony Pacific Heights
Source: National Review