Remember when people laughed at Trump saying ‘so much winning’? Are they still laughing now?

How’s THIS for ‘unintended consequences’?

Trump is projecting US power abroad. America is no longer ignored as the ‘paper tiger’ they were under a recent administration. We’re starting to see dividends from that.

The Korean Peninsula is one area where we are seeing the deck reshuffled, and new hands being dealt. (Even if it remains to be seen how that next hand plays out.)

But it’s not the only one.

Remember how Trump has been talking with the leaders in China, and has already seen some movement on their side over certain aspects of trade?

(If you missed it, this link will get you back up to speed:)
Stable Genius: Trump Just Made China Blink – This Is Big

Trade isn’t the only place we’re seeing a shift in Chinese policy.

Remember those man-made islands China was building up much to the horror of the world as it looked on? There’s an update there, too. A big one.

China’s activities in the South China Sea have proven to be one of the most contentious geopolitical issues of the Trump Presidency. Leading up to a successful summit in Singapore between President Trump and North Korean leader Chairman Kim Jong Un, new data released by Israeli Private Intelligence Firm ImageSat shows that China removed anti-ship and anti-aircraft missiles from Woody Island, in the South China Sea last week.

Woody Island, also referred to as Yongxiang Island, is the largest of the Paracel Islands claimed by China in the South China Sea. In recent years, China has taken major steps to heavily fortify the island, building runways for military aircraft and installing anti-ship and anti-aircraft missiles, much to the dismay of the United States and our Asia-Pacific allies. The unusual and sudden move to remove the missiles from the South China Sea, one of the most critical stretches of ocean in the world, is widely seen by policy experts as a nod of approval to President Trump, leading up to a successful Summit with Kim Jong Un in Singapore on Tuesday.

Amid a cancellation of joint US-South Korea military drills near the Korean Peninsula and a decrease of tensions with North Korea, much of America’s attention is likely to be turned to the South China Sea, as President Trump pursues a foreign policy that considers both military force and economics in every foreign affair.
Source: Gateway Pundit

Here’s a look at Woody Island: 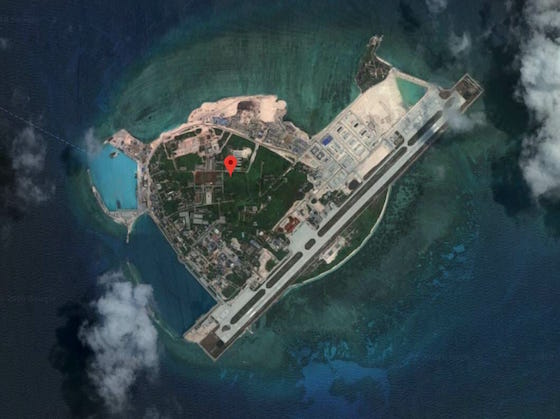