No wonder we’re losing the culture! This is a stunning difference.

Where have the Warriors and Wildmen gone?

Christian men (for the most part) are no longer the providers, protectors, hunters, or heroes. They’ve abdicated their God-given roles to become wussified little sissy-pants.

Now, don’t get all offended — there certainly are exceptions, like our very own Warriors & Wildmen, Doug Giles and Rich Witmer, and of course the amazing men serving in the military, our veterans, those that serve and protect us as law enforcement officers, firefighters, EMT’s, etc.

But let’s face it, Christianity has been effeminized and there are tons of Christian men that have bought into the lie that being a masculine man is some sort of crime. In many churches, the ‘worship’ is all the Jesus-Is-My-Boyfriend crap singing about ‘sloppy wet kisses’ and how beautiful Jesus is instead of how Holy and all-powerful our God is. We talk more about ourselves than our God. Is that how it’s supposed to be?

Doug was inspired to sketch the difference a few hundred years has made in Christian culture. 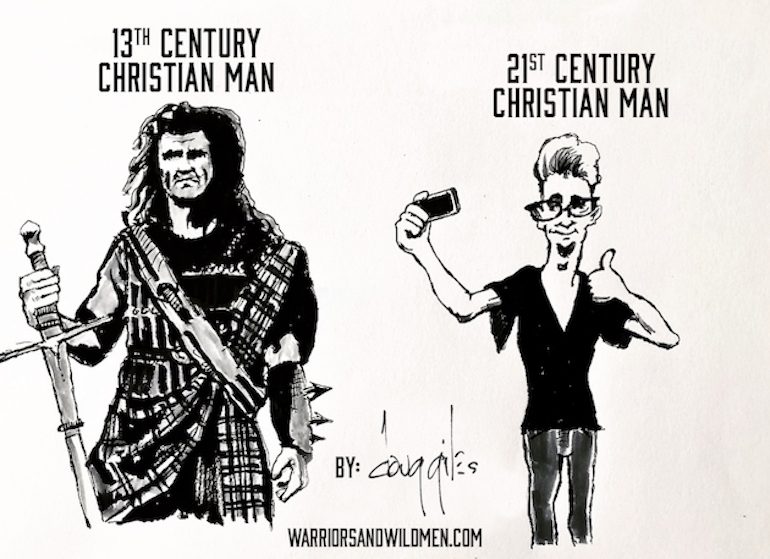 You don’t want to be that, do you?

Lordy, I hope not!

Don’t worry — if you’re on that path, we’ve got a couple of sure-fire cures for you — Doug’s best-selling book, Pussification: The Effeminization of the American Male, and the Warriors & Wildmen Man Card.

Do you have the metal to carry the Warriors & Wildmen MAN CARD? 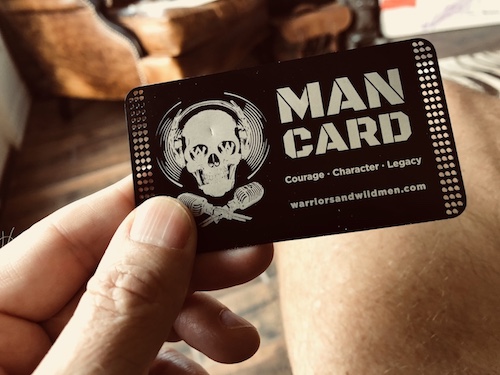 Every time you do something EPIC for God, family, or others, overcome a fear, or achieve a conquest in your life, you are challenged to “scar the card.” Hit it with a hammer or a bang it with a rock! Make sure to leave a scar to remind you of your conquests.

Take a pic with the card scarred up and share your story with us!  Join the movement. #scarthecard

This card isn’t for the wussified masses pondering which bathroom to use.

This is for men that aspire to be real men — men that embrace masculinity and live life unapologetically.

We’re talking about men that revel in that testosterone fog that God gave them. These are the God-fearing hunters, heroes, warriors, and protectors of their home. These are men that overcome their fear, reach for the top, and take action when it’s needed.

Carrying this card will make you want to do epic stuff.

Get your card today and join the adventure.
Smash that card up and share your epic tale. #scarthecard