If your company sets a new record for the largest one-day stock market drop in history… you can expect shareholders to get antsy.

“Antsy” is one word. “Mutinous” is another.

Before we go further, let’s put those losses in perspective.

Think of the biggest stock losses you can remember. Now make them bigger: 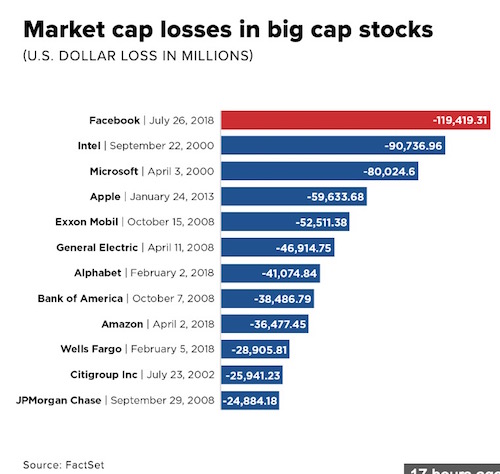 Trillium Asset Management, an activist investor that has tangled with Zuckerberg before, is leading the charge, filing the proposal hours after the earnings report, citing the company’s “mishandling” of several crises, including Cambridge Analytica and Russian interference in the 2016 election.

Trillium holds an $11 million stake in Facebook. It began advocating for the company to split the chairman and CEO roles last month. Last October, it submitted a proposal to establish a risk oversight committee within Facebook’s board to guard against fake news, among other issues.
Source: Fortune

If it weren’t for Zuck holding a majority of voting class shares, he would have been ousted before now, since 51% of independent voters voted to oust him as chairman last year, but he was shielded from that outcome that because of his own voting shares.

There is a push to split the CEO and Chairman roles — both currently held by Zuckerberg — between two people. Apple and Microsoft, for example, have already done so.

“Having an independent chair helps the board carry out its primary duty – to monitor the management of the company on behalf of its shareowners,” the proposal reads. “A CEO who also serves as chair can exert excessive influence on the board and its agenda, weakening the board’s oversight of management. … We believe this lack of independent board Chair and oversight has contributed to Facebook missing, or mishandling, a number of severe controversies, increasing risk exposure and costs to shareholders. ”
Source: Fortune

Zuckerberg’s direct control of the company, the argument goes, has concentrated too much power in too few hands, and makes it unresponsive to standard business checks and balances.

In ordinary English — splitting the roles would prevent any one person from being a control freak.

So, why is he so resistant to the idea of splitting the roles?

Why is Zuck resisting this change?