Venezuela went from being one of the wealthiest countries in South America to a place where they can’t even get water anymore. How are they hoping to solve their currency problem?

So much for that quote from that post on Bernie Sanders’ government web page (Aug 5, 2011) that didn’t age well at all.

These days, the American dream is more apt to be realized in South America, in places such as Ecuador, Venezuela and Argentina, where incomes are actually more equal today than they are in the land of Horatio Alger. Who’s the banana republic now?

That was intended as a rhetorical question Venezuela looked awesome, and Americal looked like chumps. It didn’t take long for his thesis to backfire, did it?

His beloved Socialist leaders raped the country of its wealth, lining their own pockets in the process — like socialists have since day one — and left oridinary citizens literally digging through trash for food scraps. Chavez’s daugher was estimated to be worth $4.2 Billion back in 2015.

The old Bolivar bills are so useless…

(How Useless are they?)

They’re so useless that Venezuelans are using them for crafts.

It reads like a joke, except that it’s the real tragedy of bad ideas having worse consequences.

But don’t worry. The Venezuelan dictator who’s been killing his own citizens, with hundreds now reported dead has a ‘solution’ for the ‘little problem’ of hyperinflation making their money worthless.

They’ll just drop some zeroes off of the bank notes. They were going to drop three zeros. Now they’ll drop five. 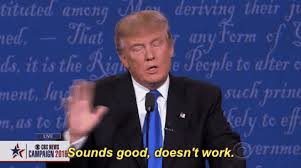 They’ve already dropped three zeroes once before. Chavez did it in 2008.

The problem is, a lack of confidence in the value of the currency itself.

That lack of confidence makes sense, because despite the vast natural wealth of the country, socialism has so badly disrupted the economy that there is no intrinsic value in their money.

Maduro’s initial redenomination plan called for slashing three zeroes from the Strong Bolivar notes to be replaced with the Sovereign Bolivar. This new delay comes after Maduro postponed a planned June rollout until Aug. 4. Maduro also signed a decree to assign the Orinoco Oil Belt’s Ayacucho 2 Block to the central bank as a way of bolstering its international reserves. The Ayacucho 2 block contains 29.3 billion barrels of oil, he said.
Source: DailyWire

A better solution would be that old homespun advice: the first thing you do when you find yourself in a hole — stop digging.