This bro just typed a 3000-word rant against Trump products while he slipped in some less than flattering statements about Trump supporters. Buckle up, this one’s gonna be rough.

Jim Vorel over at Paste Magazine just penned a 3K screed on why marketing coffee to Trump supporters is stupid. He titled it, ‘This Absurd “Donald Trump Coffee” Ironically Promises to Strike Back at “Liberal Starbucks”‘.

Vorel starts his article by saying that products that tout a political agenda are peddled by ‘shysters‘ and purchased by ‘idiots‘ that ‘lack a personality outside of identity politics‘.

Alternatively, they’re purchased by supporters that want to display their support and/or have a sense of humor. I know that whole sense of humor thing is sorely lacking on the left these days, what with the standard laugh line being ‘F**k Trump!‘ or ‘Abortion, I salute you!‘

Maybe picking up a piece of memorabilia or a product with a fun label isn’t something that those elitists (or wanna-be elitists like Vorel) can understand. 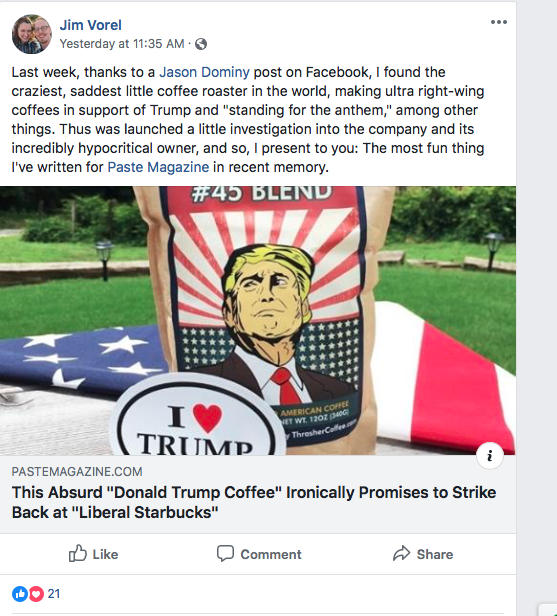 Here’s a bit from the beginning of Vorel’s article:

Kitschy knickknacks and curios emblazoned with the faces of the candidates are a shyster peddler’s dream, and there are plenty of idiots out there who buy them, whether they’re positive (tee shirts) or negative (novelty toilet paper), if only so they can have one more outlet for displaying their personal lack of a personality outside of identity politics.

But of course, this being America, some companies take it upon themselves to take this concept to its most illogical extreme, remaking the entire identity of their business in order to pander to an oblivious political niche audience. And I believe I’ve managed to find one of the most ridiculous, cringeworthy examples in recent memory: Dallas, Georgia’s Thrasher Coffee Company.

You can see where this is going.

But I’m sure that Vorel would be totes kewl with the Queer Cafe in Los Angeles, right?

Or the Anti-Trump merch that’s all over Amazon — from a parody children’s book to a pen holder in the shape of the President on all fours with his pants down and impeachment scented candles to paper ‘ear no evil anti-Trump ear protectors’— that drew no ire from Mr. Vorel. And that stuff is everywhere for every leftist cause — Women’s March, Gay Marriage, Gender is a Spectrum, Open Borders, and more.

Planned Parenthood sells baby onesies for crying out loud! Is there anything more macabre than that?!?

I’m a capitalist, so if you think there’s a market for your product, go for it, man! Make that moolah and get it back into the economy — and hey, while you’re at it, create jobs for others. That’s the American Dream, isn’t it?

He’s upset that people are buying the coffee.

As it turns out, Thrasher’s true business is not necessarily “selling coffee,” but “flattering conservatives into buying coffee-tangential Trump paraphernalia.” And the fact that they didn’t think to name one of those coffee brands “Wake Up, Sheeple”? That’s just a missed opportunity.

So, who is this guy? He’s the News Editor of Paste Magazine. 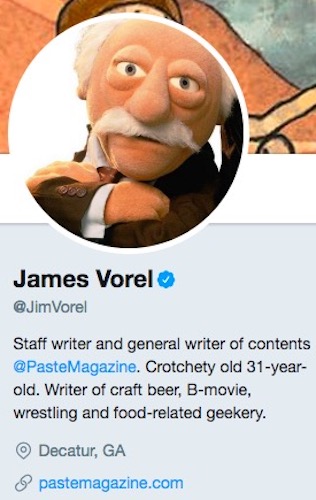 He’s a lot more mature than I would have imagined.

Ok, so that’s not a real photo of James.

Here’s one from his LinkedIn profile:

Yep, that’s more what I had in mind. He’s one of those leftist haters hiding in the body of a seemingly normal person. #LiberalTolerance

His big bugaboo seems to be the Trump blends of coffee by Thrasher.

Those have totally got this bro triggered.

He invokes the phrase ‘cognitive dissonance’ when describing the coffee and contrasting it to President Trump’s policy of following immigration laws that are on the books. It’s just more leftist drivel about the manufactured outrage of the policies that didn’t make the headlines in 2014.

I must say, kudos to Thrasher for immediately ratcheting the cognitive dissonance-o-meter up to 11 by managing to praise the country’s “diverse and blended nature” while simultaneously dedicating this coffee to Donald Trump, whose immigration ban and family separation policy have already created a humanitarian crisis and living nightmare for immigrant families in the U.S. That is some grade-A hypocrisy right off the bat, and we’re only on the first coffee!

Look, we all think that separating families is bad, but is it worse than making a child complicit in an illegal act? Or, worse than that, child sex trafficking or sending your kiddos over the border illegally with human smugglers? But hey, let’s just talk about how terrible the President is for actually obeying the laws on the books.

I’ll bet Mr. Vorel, the brilliant political analyst that he is, has a better plan, right? Lemme guess — just let everyone stay because that’s compassionate? Is it ‘compassionate’ to all those people trying to come into the country legally? The ones that pay thousands in legal fees?

Yeah, that’s what conservatives are upset about.

The 45 Blend and The Best Part of Waking Up coffee are both available in the ClashStore, by the way.

Because Vorel is such a peach, he doubles-down and attacks the owner of Thrasher Coffee.

So we know they’re idiots, but what about the identity of the idiots? Well, the company’s “about” page isn’t much help;it’s just general platitudes about coffee, wrapped in a “support us, we’re an indie company” vibe. Likewise with the page about Master Roaster Seth Gragg—neither page mentions anything to do with conservatism, despite the fact that their coffees and merch page (get your LIBERAL TEARS mug here!) are completely saturated in it from top to bottom. It’s almost as if all the intense right-wing stuff might be coming from an unnamed source with total power over the company, like an owner …

Meet Brandon Vallorani, who is not mentioned anywhere on the company’s “about” pages, but is mentioned (not by name) as Thrasher’s “founder” in the entry for one of the company’s coffee blends, “The Wolves and the Mandolin.” Why is he mentioned here? Why, because this coffee is a tie-in to sell more copies of his book by the same name! A book on Vallorani’s “philosophy on business, life, family, and legacy.”

But he’s not done, not by a long shot.

Spoiler alert: You’re an uncouth, dumb, hard-hearted, white supremacist a-hole for not getting your coffee at a lefty coffee house.

Ultimately though, the thing that makes me laugh the most about the existence of a brand like Thrasher Coffee may be the fact that a small, indie, artisanal product like coffee is inherently something where the consumer base is typically more liberal than conservative. Why? Because artisan coffee implies a degree of morality and empathy toward the less fortunate in its farming, harvesting and production, and these are all things that conservative consumers by and large don’t give a shit about.

Do you really think a Trump voter drinking pour-over varietal coffee cares about the roastery’s relationship with the farmers in Nicaragua, Honduras or Guatemala? These people don’t care when the U.S. government is putting the children of Guatemalan refugees IN CAGES, IN THE U.S. They’re sure as hell not caring about something as distant as whether those farmers, thousands of miles away, are being properly compensated for backbreaking labor, among other things. In fact, the one place that a roaster like Thrasher will probably never source any of its “American coffee” from … is America, despite the fact that coffee grown in California is actually on the rise.

Let’s just say that there’s a reason why you tend to find cans of Folgers in your Trump-voting parent’s cabinet, and bags of locally roasted, indie, micro-roastery coffee in the average Bernie Sanders supporter’s pantry—it’s because one of them is making purchases that involve mindfulness and empathy, and one is not. These are not coincidences. Even buying from a legitimately small business in general is against the Trumpian mindset, which decrees that shoving your dollars at corporate oligarchs and mega-corporations is the epitome of patriotism because these billionaires are magnanimous “job providers.”
Source: Paste

Forbes has an article that ‘Fair Trade’ coffee is a marketing ploy and it doesn’t actually help the poor farmers.

JavaPresse had an article about the high cost of organic certification which often isn’t even necessary as most coffee is organic anyway.

But hey, wouldn’t want to let facts get in the way of a good internet tirade, amirite?

Now, I could say something mean like, the reason it’s called ‘Paste’ magazine is because the opinions on there are consistent with the mental faculty of folks that eat glue — but that would be low.

Instead, I’ll simply remind Vorel that it was the left that injected the idea of ‘companies with a conscience’ — we just have different priorities, and we want to support those.

What Vorel doesn’t know (among many, many things,) is that Thrasher has been seeing sales soar after this hit-piece.

Thrasher has been getting a lot of support in the conservative community.

Not just because of its political stance, but because they have damn good coffee. 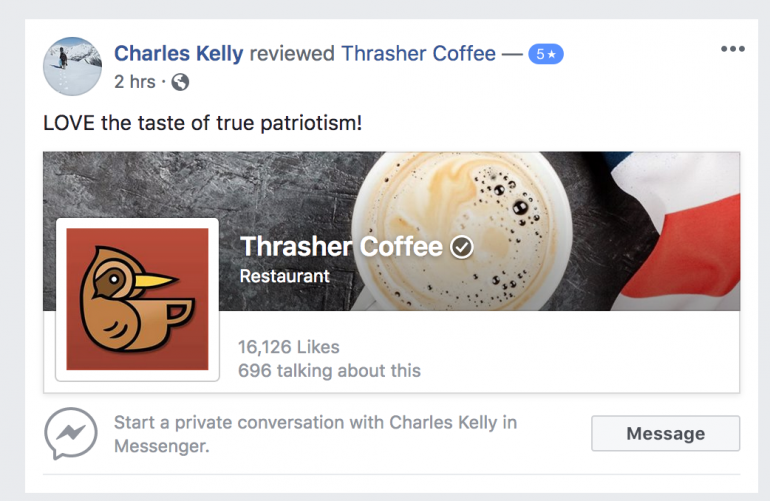 Yo, Jimbo — If that coffee offends you, check out this Presidential Portrait commissioned by none other than the man you’ve cast as your incredibly successful arch-nemesis, Brandon Vallorani.