[CORRECTION: In the initial report, the article stated that the screenshots of the videos were from the official #WalkAway campaign YouTube channel. The article has been updated to state that those videos were gathered to a fan channel. My apologies for any confusion this error may have caused.]

One former liberal has started a movement. He’s collecting videos of people explaining why they are leaving the left. It’s a beautiful thing.

Brandon Straka was a life-long liberal and is now an ex-Liberal. He’s also gay, a hairdresser, an aspiring actor, and now the leader of what can now be called a movement.

Straka says that he was one of those people crying on Election Night 2016, and couldn’t understand how the country that he loved could elect such a horrible racist.

And then, a friend of his showed him a video and his eyes were opened. Everything changed completely.

The video was about how the Media (D) created the false narrative that Donald Trump and his supporters are racists, bigots, and haters.

The campaign launched in late May and people are using the hashtag all over social media posting their reasons in their own words for their #WalkAway. Straka has over 55K followers on Twitter and about the same on Facebook.

The movement has fans.

There is a dedicated fan channel on YouTube that drew my attention to just how many people are making videos. In just a couple of weeks, that channel has over 18K subscribers and more than 80 videos.

Here are a few screenshots of some of the videos from the fan page that is gathering the videos. 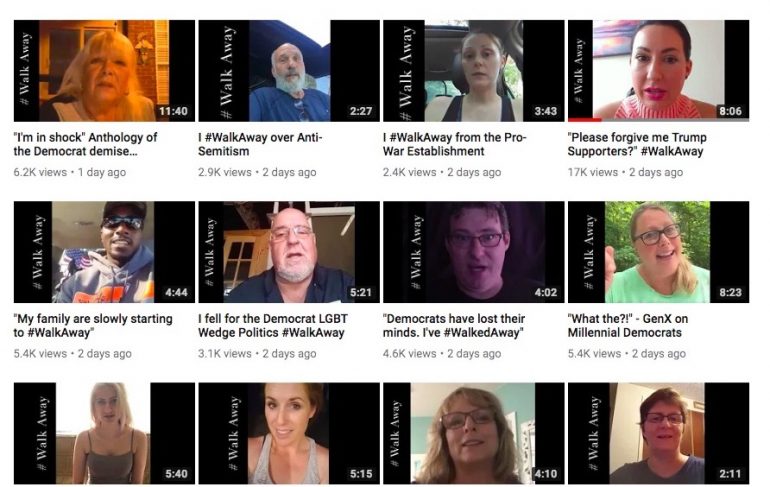 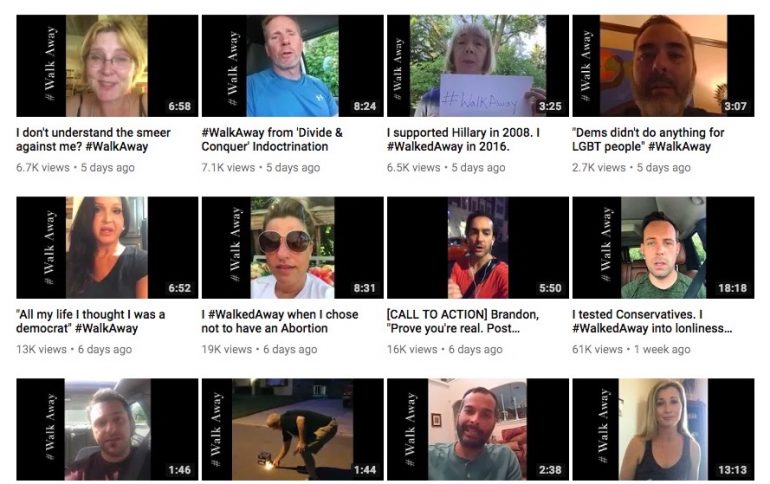 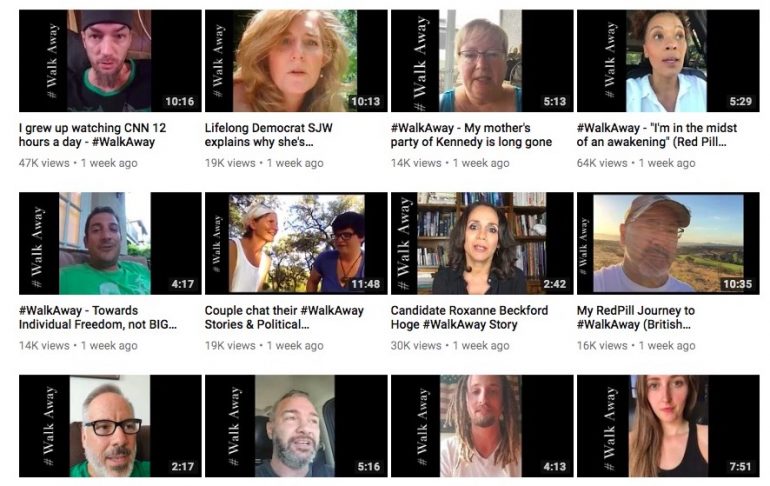 Today I’m kicking off the #WalkAway campaign by releasing my video about why I am walking away from liberalism and the Democratic Party. It is my sincere hope that you will join me in this campaign and that we may start a movement in this country- which not only encourages others to walk away from the divisive left, but also takes back the narrative from the liberal media about what it means to be a conservative in America. It is up to all of us to make our voices heard and reclaim the truth. The Democratic Party has taken for granted that it owns racial, sexual, and religious minorities in America. It has encouraged groupthink, hypocrisy, division, stereotyping, resentment, and the acceptance of victimhood mentality. And all the while, they have discouraged minorities from having independent thought, open dialogue, measured and informed opinion, and a motivation to succeed. Please like and share my video, and please post your own #WalkAway video!! If you are a former liberal who has walked away from the left, please share your story, or your message, or your thoughts in a video on the WalkAway Campaign Facebook Page.If you are a lifelong conservative or non-Democrat, please share your story, message, or thoughts on what it truly means to be a conservative. Right now, the liberal media continues to perpetuate a false narrative about the “hateful” and “bigoted” right. Use your voice to let people know who conservatives really are. Be sure to use the hashtag #WalkAway.Please like and follow me on Facebook and Twitter:@usminority The Unsilent Minorityand subscribe to my YouTube channel: The Unsilent Minorityhttps://youtu.be/4Pjs7uoOkag#liberal #liberals #conservative #conservatives #democrat #democrats #democraticparty #republican #republicans #republicanparty #trump #hillary #clinton #foxnews #cnn #msnbc #usa #america #fakenews #redpill #lgbt #gay #africanamerican #WalkAway Tucker Carlson Tonight Fox News Voices Fox News Lucian Wintrich Milo Yiannopoulos Candace Owens Steven Crowder Dave Rubin The Rubin Report Breitbart The Hill New York Post The Daily Caller NationalReview.ng Drudge Report TheFederalist.com CRTV Tomi Lahren Sean Hannity Sean Hannity News The Rachel Maddow Show Anderson Cooper 360 Don Lemon CNN CNN MSNBC NYTimes

Posted by Brandon Straka – The Unsilent Majority on Saturday, May 26, 2018

Straka has now been labeled as ‘alt-right’ and was actually refused service at a camera store in Manhattan because of his role in the #WalkAway movement.

Do you get the cognitive dissonance involved there? How much do you want to bet that the camera store employee that refused to serve Straka was upset when the Supreme Court sided with the Christian baker that didn’t refuse service but wouldn’t lend his artistic talents to bake a cake for a gay wedding? All those calls of just ‘bake the damned cake’ ring a little hollow if you won’t do the job that can be performed by a self-checkout lane.

There are many, many videos of people explaining why they have walked away.

The caption under the video reads:

[This video hit me in the heart]

“I hope this campaign can be about people having the freedom to vote for who they want, talk to who they want, and to be safe to have their own opinions. I hope Trump supporters in particular will see this so I can begin to give my apologies for any part I may have played in your mistreatment.” Shannon.

This awesome one by this bro that cites historical accuracy:

Dilbert creator, Scott Adams, used his massive platform to discuss the #WalkAway movement — and the Democrats use of fear — on Periscope.

Dang, this is powerful stuff!

We’ve been wondering where the rational, reasonable people on the left were. Now we know where to find them. And they’re leaving the left altogether.

This bro is fierce. He tweeted out his next goal: