The same guys who gave us The Sequester dropped in at a local shop to show their support for Veterans. Do you buy it?

There are politicians whose commitment to veterans and their causes are beyond question.

Dubya, for example, could be criticized for many things, but contempt for those who serve in the military is not one of them.

Obama and Biden? If the empty seats in Obama’s final address to the military are any indication, that’s a whole different story.

Trump has made reforms to VA care a policy priority.

Obama and Biden stopped in at a bakery in Washington to show their support for Vets transitioning to civilian life.

Look who stopped by @DogTagBakery for lunch today! Thank you @BarackObama and @JoeBiden for supporting our mission of empowering veterans with service-connected disabilities, military spouses, and military caregivers! #BakingADifference #veterans #milspouses #caregivers pic.twitter.com/bLHttsgXJF

On the plus side, we’ve got ourselves a new photo of Obama to rival the mom-jeans or that 2-for-22 free throw embarrassment 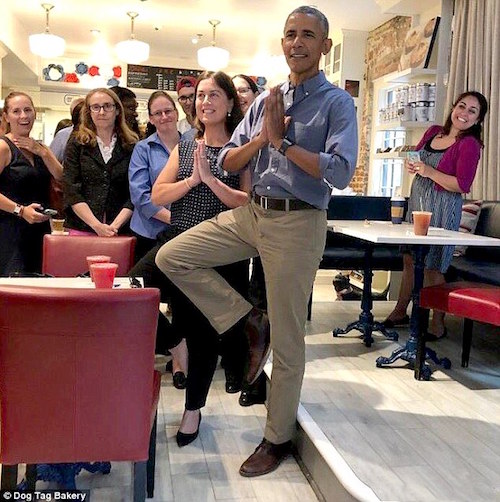 Here’s some video of the visit:

omgg @BarackObama and @JoeBiden just ate lunch together in dc. miss them so much ? @DogTagBakery pic.twitter.com/kl4Tf8zO8k

Kudos to the Bakery, for all they do for veterans. Period, full stop.

And, in a day where people are chased out of restaurants for being affiliated with the ‘wrong’ politics, props for being so gracious to their paying customers.

After all, when you wear the uniform, it’s not supposed to be about ‘Red’ or ‘Blue’, but ‘Red White and Blue’.

But for those of us who are observers, and can speak freely, we have a question. Are you buying Obama and Old Joe’s schtick or are they being ‘too cute by half’?

Biden, who’d bellied up to the counter first, can be seen receiving a sandwich on a plate. As he’s asking the bakery staff if they have any mustard, Obama pops up and peers at the plate, saying, ‘Hold on, hold on, what’d you get here?’

‘I got one of these whatever the hell they’re called,’ Biden responds.

‘”Whatever the hell they’re called?”‘ Obama repeats as he wanders over to the display case to look at what the food options are.

Biden then lifts his plate into the air, examines the sandwich and proclaims that it’s ham and cheese, at which point Obama says, ‘Yeah, that looks pretty good, I think I’ve gotta have one of these, too.’

‘Give the boss one of those, too,’ Biden says, as Obama adds a fennel salad to his order.

Biden was one heartbeat away from being our President. Heaven help us.

And he may yet take a run at that job. But let’s go back to what he said:

Does Obama have a new job we don’t know about, or is Biden just being a kiss-ass?

Funny. We’re old enough to remember when Obama and Biden used the military as leverage to squeeze Republicans for more domestic spending with their ‘Sequestration’.

Lack of money is one of the answers to the question, “Why Are So Many Navy Ships Crashing?” as one CNN headline so succinctly put it. From that article:

To Republicans and some Democrats in Congress, the budget issues affecting military readiness have long been a point of concern, as maintenance and training dollars have often been the first cut while the Pentagon has faced constrained budgets under the 2011 Budget Control Act.
Former Virginia Republican Rep. Randy Forbes, who is now a fellow at the Naval War College, said the concern over the recent incidents goes beyond just determining why the collisions occurred, but points to a broader issue if the Navy had to ramp up in a significant conflict.
“When our ships are having this much difficulty sailing in open waters, it gives us a lot of concern about what would happen if we were in a major conflict and how we would operate there,” Forbes said. “The Navy is in desperate need of additional resources so that they can do the kind of training they need, they can do the kind of ship maintenance they need.”
Source: CNN

It was their plan to slash budgets. And those budget cuts literally cost America lives. But we’re supposed to forget all that and believe they’re big boosters of our vets, now?

Are YOU buying that story?

Obama and Biden's visit to the Veterans' bakery...