What would you do if your son was on this team?

A bunch of teens in an amateur basketball league got quite angry at a call by a referee and it ended in a brawl.

The shocking moment at a basketball tournament was caught on video.

The fight broke out at the Amateur Athletic Union’s Gatorade Association tournament finals game, which was being played by Chicago’s R.A.W. Athletics and Texas‘ Houston Raptors, in Emerson, Georgia.

In the first of two videos, which were tweeted out by recruiting analyst Doug Jones, a referee appears to tumble to the ground, after which members of the R.A.W. Athletics team push and punch at him.

It’s unclear from the videos what exactly it was that started the fight, but a now-deleted tweet suggested that it was a ref that attacked one of the players. 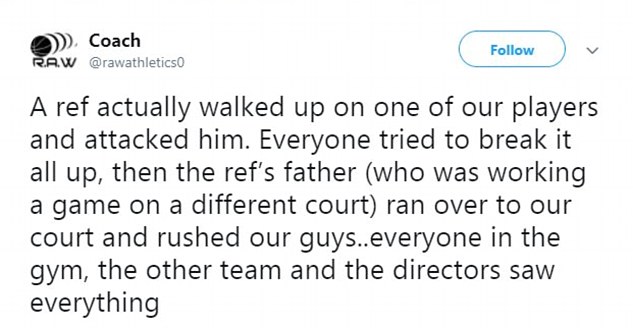 However, shortly after the videos were posted on Twitter, the R.A.W. Athletics’ Twitter handle posted a tweet, stating that ‘A ref actually walked up on one of our players and attacked him.’

‘Everyone tried to break it all up, then the ref’s father (who was working a game on a different court) ran over to our court and rushed our guys..everyone in the gym, the other team and the directors saw everything,’ the tweet continued.

This was expounded on by R.A.W. Athletics’ head coach Howard Martin when he spoke to ESPN. Martin said that the brawl began towards the end of the game after one of his players complained about a call the ref had made.

The player then ‘made a comment to the referee. The ref didn’t like it. So the other team inbounded the ball, walked it up, the ref said to my player, ‘Say it again.’ Then he T’d him up and kicked him out of the game,’ Martin told ESPN.

Martin said that the ref continued to have ‘words’ with the player and then pushed him, at which point ‘they squared up’ in front of the R.A.W. Athletics’ bench, leading to another player attacking the ref.

Martin said that they separated the players and the ref, but then other officials came in and tried to ‘join in,’ demanding to know who had hit the ref. When one of the players said he did it, one of the officials ‘charged the kid. And it all went to hell.’

That account is disputed by Houston Raptors’ Head Coach,  Bobby Benjamin, who said that the fight began when the R.A.W. Athletics seemed to be frustrated because they were behind in points.

Benjamin told ESPN that the referee called a technical foul against the R.A.W. Athletics player. The player then shouldered him, before pushing him to the ground.

‘The referee definitely didn’t attack the kids,’ Benjamin said, adding that the ref was ‘assaulted’ and that once the fight started, the refs were ‘too outnumbered to even try to defend themselves.’

Martin says that he doesn’t condone the players’ actions, but said that they are minors that need to be protected. With the huge media frenzy over the story, he’s going to get legal advice when he returns to Chicago.

‘Now it’s all over social media, news outlets, that my kids are a bunch of thugs and a bunch of gangbangers,’ Martin said.

‘They’re all teenage boys. One [ref] came to the aid of another [ref], which he shouldn’t have. He should have let us handle it.’

Was that appropriate behavior for the teens on the R.A.W. Athletics?

Was This Appropriate Behavior By These Teens?