Days after President Trump met with the CEO of the New York Times who was upset that they were being labeled ‘Fake News’ they hired a Twitter troll. Great timing, guys.

We covered the NYT whining here:

Sarah Jeong, a writer and part-time Twitter troll, has been hired by the New York Times to join their Editorial Board. 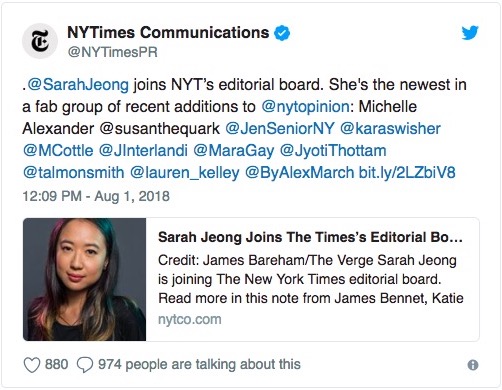 Part of that ‘fab’ group? Maybe ‘fab’ doesn’t mean what it used to…

Here’s why people are upset: 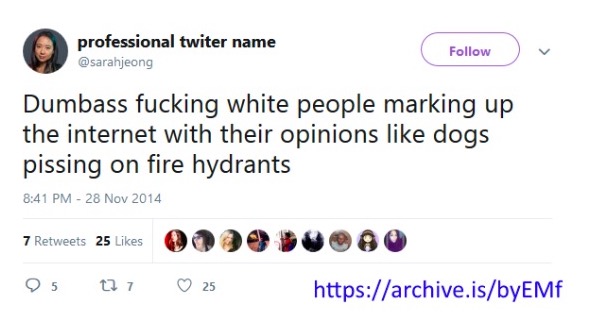 But wait! There’s more… we did say that she was a part-time Troll, right?

Here are some of her other choice tweets: 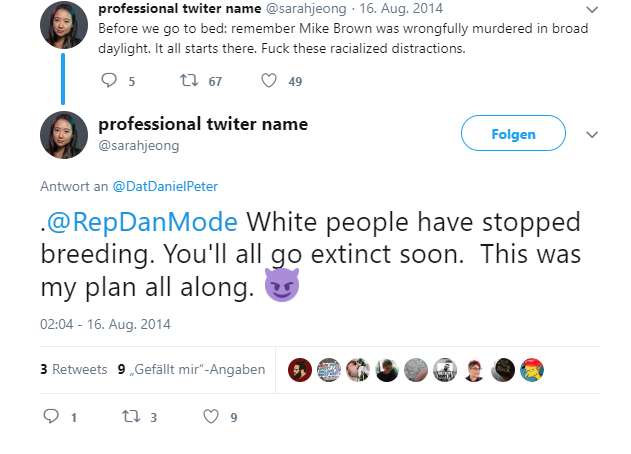 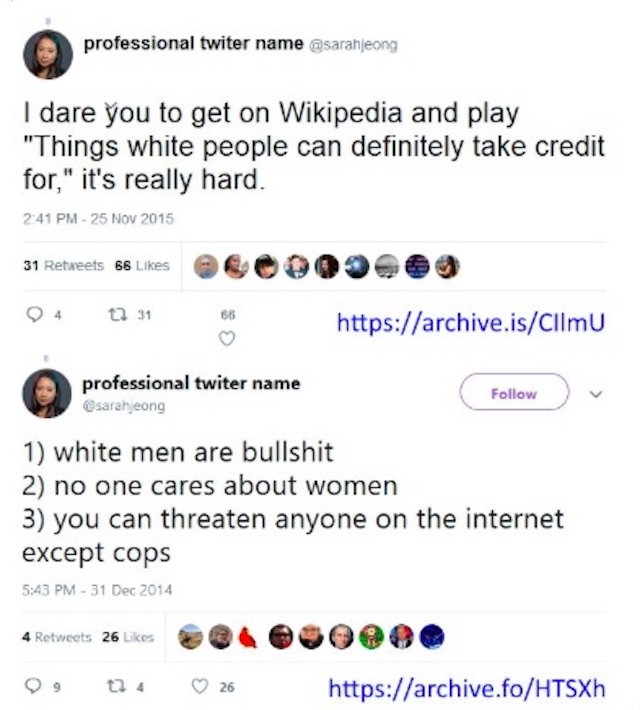 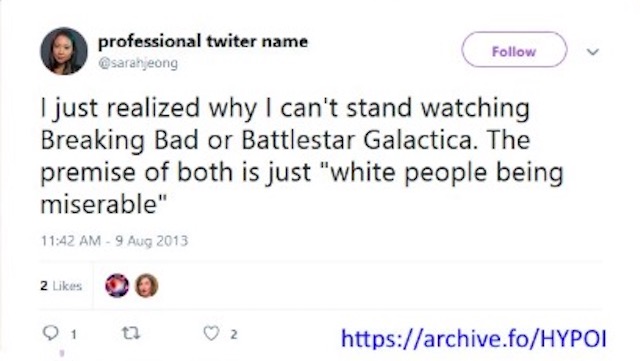 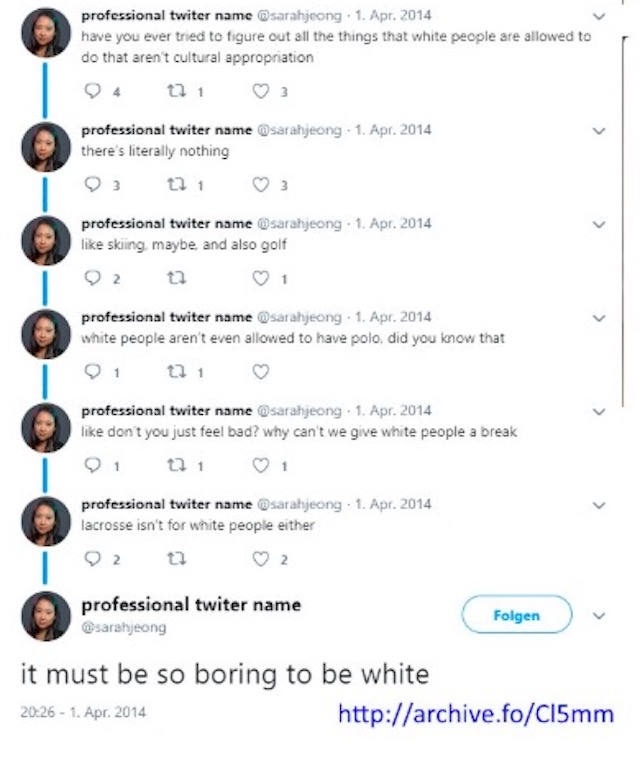 Welp, I think there’s only one thing to say to that…

Wait, is that GIF considered ‘harassment’? I just kinda got upset at all that blatant racism in one place.

Wow. Twitter really does bring out the worst in a person.

If only Ms. Jeong understood that the internet harassment, online abuse, and the ‘call-out culture’ is a problem these days.

Oh, wait — she gave an hour-long lecture at Harvard University called ‘The Internet of Garbage‘ about that very thing.

Watch as she unironically talks about online abuse:

In the wake of her tweets being published, both the New York Times and Sarah Jeong have issued statements about the hiring.

The New York Times has defended the hiring and said that she ‘regrets’ her online Twitter rants where she was ‘imitating the rhetoric of her harassers’.

Our statement in response to criticism of the hiring of Sarah Jeong. pic.twitter.com/WryIgbaoqg

I engaged in what I thought of at the time of counter-trolling. While it was intended as satire, I deeply regret that I mimicked the language of my harassers. These comments were not aimed at a general audience, because general audiences do not engage in harassment campaigns. I can understand how hurtful these posts are out of context, and would not do it again.

We just move on while she doesn’t address it at all and instead engages in ‘whataboutism’? 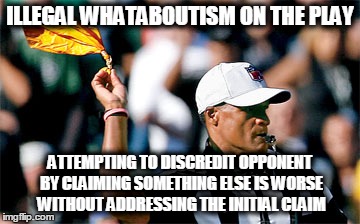 She basically said, ‘Look! I had these mean tweets, so I posted a whole crapton of mean tweets back aimed at white people. You can understand that, right?‘

Jeong also said that the comments were not aimed at a general audience. Um… really? She wasn’t responding to any one individual in the vast majority of those tweets.  Back in the early days of social media, the internet term for those tweets would be ‘sh-tposting’. Today, it’s called, well… nothing, apparently.

Unless you’re a conservative that is.

Contrast this alleged ‘non-troversy’ at the Fake News New York Times to the big hullaballoo over Kevin Williamson’s recent hiring and swift firing at The Atlantic.

In case you missed it, back in March, The Atlantic decided to broaden their appeal and diversify the political viewpoints of their writing staff by hiring well-respected conservative writer Kevin Williamson. The outrage was immediate.

Last month, The Atlantic hired Kevin Williamson, the longtime National Review staffer. Jeffrey Goldberg, the editor in chief of The Atlantic, announced the move, declaring him a writer “whose force of intellect and acuity of insight reflect our ambition.”

Immediately, critics began poring over Williamson’s substantial archive of published writing and public statements. Among the most controversial was an exchange on Twitter about abortion and the death penalty. Williamson declared that “the law should treat abortion like any other homicide.” Pushed to clarify, Williamson added, “I have hanging more in mind.” Later, he expounded, “I’m torn on capital punishment generally; but treating abortion as homicide means what it means.”

Many progressives cited those words as decisive proof that The Atlantic erred in hiring Williamson, even as many centrists and conservatives praised and defended him. “Weighed against these charges are hundreds of thousands of words of smart, stylish and often hilarious commentary, criticism and reportage,” Bret Stephens wrote. “Shouldn’t great prose and independent judgment count for something?”

Williamson was fired three days after his first article was published by The Atlantic.

Now, look at the constant condemnation by the Media (D) of President Trump’s tweets.

Robert Mueller is now examining President Trump’s tweets as possible Obstruction of Justice. (Good luck with that, by the way.)

But here we are in 2018 where party affiliation determines how you’re treated.

Maybe it’s time we look at treating each other as equals and with a modicum of respect, do you think?

I wonder what the First Lady would say about Sarah Jeong’s online comments about ‘white people’.

Both women are advocates against online harassment — which one would you rather listen to?