If their hand-wringing over the ‘grave concern’ of ‘election meddling’ was honest, the Media(D) would be cheering Trump’s solution to it. IF they were HONEST, that is.

While Dems keep blurring the distinction between legal citizens who have a right to vote, and the Illegal Aliens they’ve recently chosen as their favorite ‘oppressed’ group, Trump dared to push back, and remind the public that only American Citizens can — or even should — vote in American elections.

And he made the case for Voter ID.

But, predictably, Democrats don’t benefit from his reasonable solution, so they make excuses for why suggestions like these are bad.

Usually, they begin by saying something supposedly profound like ‘that’s racist’! 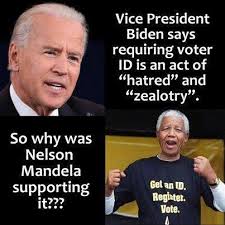 Which is, as you can see, is pretty easily debunked.

Either we want tamper-proof elections, or we don’t.

You claim that ID somehow ‘disenfranchises’ black people. Someone tested that theory by asking some ACTUAL black people about whether ID was racist.

Unless there’s a THIRD option. Such as not wanting a monopoly on election tampering to be threatened.

Obama’s old ‘wing man’, Eric Holder, is hard at work trying to change the gerrymandering rules, as we speak. He just wants things to be ‘more fair’, though, right?

We’ve shared any number of stories about left-leaning campaigns or advocates either playing fast and loose with election rules, or mass pardons being issued just before a vote. In fact, just recently, Cuomo did the same thing.

Which side do YOU really think is cynically trying to ‘tamper with’ the vote? And if tampering is such a serious threat, isn’t addressing that threat better than ignoring it?

If You Need An ID For Beer Should You Need One For Voting?