Alas, this is not satire. It’s now imperative that we ditch medical terms in order to be ‘gender inclusive.’

If you are concerned with the seismic shift in our language due to the advocacy of the absolute fringe of the fringe of the LGBTQ+ movement, then this is going to be a rough read.

What bothers most people, I think, is that the entire use of language has to be rapidly altered to adjust to the new normal in the celebration (not just acceptance) of those that are gender non-binary and transgender.

Let me be clear here, that I have incredible sympathy and cannot even imagine the struggle that dealing with identity issues like this is for an individual. We can discuss ad nauseam whether gender dysphoria is a mental condition akin to anorexia nervosa, or ‘born that way’ with the ‘wrong-gendered’ brain, or a decision to live as the opposite gender, or some other reason. There are plenty of theories out there, you can easily find them on the internet. I don’t have the answers, nor do I pretend to. For this discussion, the reason behind the gender non-conforming is irrelevant. The fact is, the incidence of transgenderism and those that identify as gender non-binary is a tiny sliver of the population.

But it is to that tiny sliver that California-based health information provider, Healthline, is advocating that language be altered.  Specifically, medical terminology that is gender-based.

Healthline claims that the higher rates of sexually transmitted diseases and HIV in the LGBTQ+ than the population at large are due to discrimination in the sex ed curriculum. They’ve decided to fix that by adopting the terms used by those that are gender non-conforming in order to be more inclusive.

Healthline has dropped the word ‘vagina’ and instead uses the term ‘front hole’ in their LGBTQI Safe Sex Guide.

That could get awkward.

Last time I checked, nostrils are on the front of your body.

But they’re doing this for ‘clarity’, don’tcha know!

Here is an actual quote from the article:

Traditional safe sex guides are often structured in a way that presumes everyone’s gender (male/female/nonbinary/trans) is the same as the sex they were assigned at birth (male/female/intersex or differences in sexual development).

Sex education resources often use videos, pictures, and diagrams as a way to convey important information, though these images and videos have historically failed to reflect or provide information about same-sex and queer relationships. In fact, the GLSEN 2015 National School Climate Survey shows that only about 5 percent of LGBTQ students saw LGBTQ representation in health class.

So, either Healthline is suggesting that gender non-conforming individuals are too dumb to understand that genital to genital contact, swapping fluids, and sex acts put you at risk for sexually transmitted diseases, or that we must all be versed in the alternate terminology used by the fringe of the fringe of the sliver of humanity that this is relevant for.

Just so you’re aware, Healthline is a medical information website, and they take pains to make sure that their information is accurate. This article was medically reviewed by Dr. Janet Brito, a Psychotherapist who counsels on sexual behavior, including LGBTQ+ issues.

The article goes on:

And as a result, the notion that a penis is exclusively a male body part and a vulva is exclusively a female body part is inaccurate. By using the word “parts” to talk about genitals and using medical terms for anatomy without attaching a gender to it, we become much more able to effectively discuss safe sex in a way that’s clear and inclusive.

For the purposes of this guide, we’ll refer to the vagina as the “front hole” instead of solely using the medical term “vagina.” This is gender-inclusive language that’s considerate of the fact that some trans people don’t identify with the labels the medical community attaches to their genitals.

For example, some trans and nonbinary-identified people assigned female at birth may enjoy being the receptor of penetrative sex, but experience gender dysphoria when that part of their body is referred to using a word that society and professional communities often associate with femaleness. An alternative that’s becoming increasingly popular in trans and queer communities is front hole.

The article goes on to say that it is because there is a lack of representation from the LGBTQ+ community and anti-LGBTQ+ bias in safe sex guidelines that gender non-conforming individuals have higher rates of sexually transmitted diseases and HIV.

Here I was thinking it was the sexual activity itself.

Dear Reader, we have entered a time where medical terminology is now considered bigotry.

The entire world needs to change how we use words because Healthline says that there might be a handful of people out there somewhere that were born female and enjoy having penetrative sex, but feel ‘dysphoric’ when using the anatomically correct term for their genitals — because the word ‘vagina’ implies ‘femaleness.’

What does that make all of those female protesters at the Women’s March in their costumes and their hats?

Are they all trans haters?

Is their vagina costume the equivalent of the Nazi flag? It’s obviously triggering to some that are gender non-conforming.

By the way, in the insanity that Healthline is peddling, it seems that they’re not all up to speed, either.

Here’s their BodyMap of the Human Reproductive System. It’s clearly labeled ‘Male’ and ‘Female’ with anatomically correct parts for each system.

They didn’t even bother to add in ‘front hole.’ 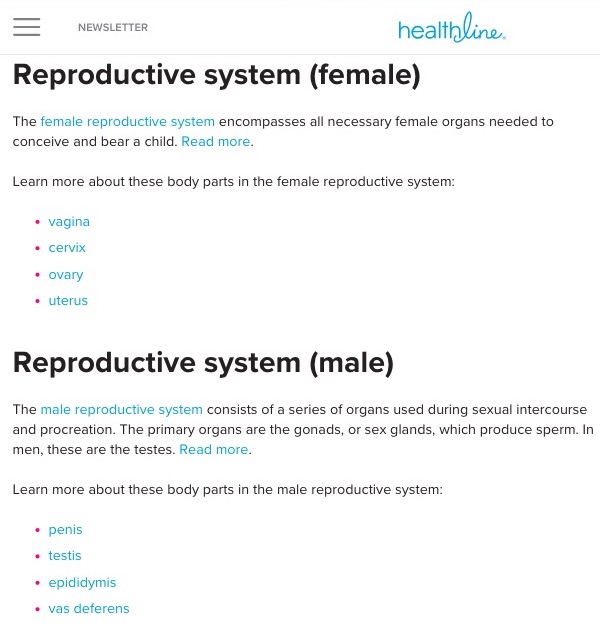 All kidding aside, this language change is most damaging to women.

There is already a push for people who are transgender to take on the term ‘male’ or ‘female’, ‘man’ or ‘woman’ without any qualifier such as ‘trans’ or ‘transgender’, while those that make up as much as 99.99% of the population are to take on the term ‘cis’. For example, someone born as a woman and identifies as a woman is a ‘ciswoman’, and a male  that is transgender would be a ‘woman.’

Do you see what they’re doing?

It’s the redefinition of language in order to fit into the hierarchy of oppression that the left is pushing. It’s all just a part of the neo-Marxist oppressor vs. oppressed, intersectional politics that’s in vogue right now.

The left wants the vast majority of people to acknowledge their ‘cisprivilege’ in things like the normalization of the word ‘vagina’ in the sex ed curriculum.

Notice that they didn’t rename ‘penis’ as ‘fronthose.’