The Democratic Party has replaced Hillary with Maxine Waters. Is that a good move?

She’s been shrieking ‘Impeach 45!’ pretty much from the moment of his election.

That’s a questionable move by Maxine Waters, who is spectacularly unpopular in some circles.

Her stellar Congressional record includes passing all of 3 bills since her election in 1990.

She represents South Central Los Angeles, an area filled with poverty, gangs, crime, and persistent unemployment that hasn’t improved in the 38 years that she’s been in office.

Rep. Waters has also somehow become rich — benefitting an estimated $1 million through her D.C. connections — on her $170,000 per year Congressional salary.

She also has the distinction of being named the ‘Most Corrupt Member of Congress’ 4 times.

Despite that, ‘Auntie Maxine’ is now the inspiration behind a designer t-shirt by Willie Chavarria. 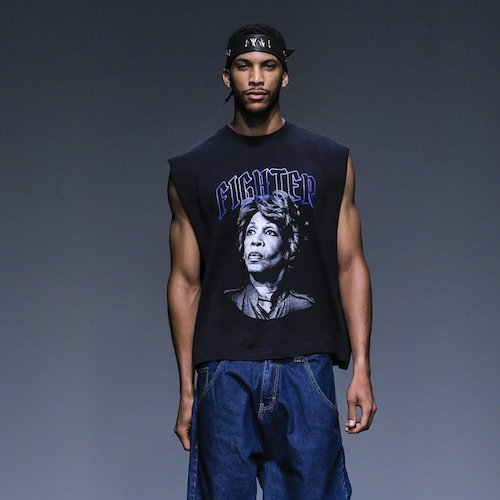 Everywhere she goes, she shouts ‘Impeach 45’ and riles up the #Resist crowd:

Jesse Watters to Jessica Tarlov: "I'm not calling you stupid but it's the economy stupid."
Hannity: "You have gotten so mature. That's really mature of you."
Watters: "I've gotta to cover my bases." pic.twitter.com/eKQH4qVxww

Jesse Watters is right, ‘Auntie Maxine’ has become the face of the Democratic Party.

This is the woman that stood up in January of 2017 begging for a signature to protest the election results during the joint session of Congress at the Final Count of Electoral Votes.

Maxine is so well-respected by her peers that she was booed for that stunt.

Here she is in March 2017 with some other members of the Congressional Black Caucus to — what else — Resist Trump by calling him racist. 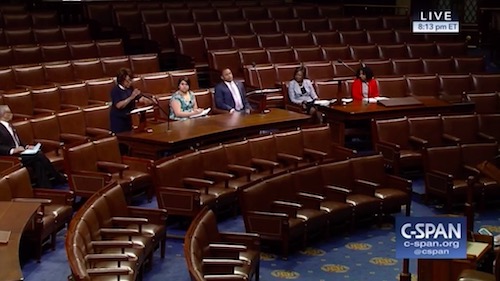 That’s quite the crowd hanging on her every word, amirite?

This is the woman that they’re pushing to lead them into the mid-terms?!?

She’s also got the hubris — or is it insanity? — to say that ‘God is on her side’ in her opposition to Trump.

Don’t forget that she has called for the public harassment of Trump Administration Officials as part of the opposition to their policies.

Because that’s civil discourse in 2018.

All of her anti-Trump action, however, has put her in the crosshairs.

President Trump has tweeted that she’s a ‘low-IQ individual’ — and somehow people are taking issue with that.

Since she’s been calling for the impeachment of President Trump, and the public harassment of Republicans, a petition was started on WhiteHouse.gov to boot her out of office.

And now, there is a complaint filed against Rep. Waters for violating House Ethics Rules because of her violent rhetoric.

She’s also being investigated by the FEC for breaking election finance law.

Democratic Rep. Maxine Waters, one of the most outspoken members of the anti-Trump ‘resistance’ in Congress, is facing fresh questions about a longstanding controversy regarding how her campaign raises money and how those funds have flowed to her daughter.

The California congresswoman has raised hundreds of thousands of dollars each election cycle from some of her state’s biggest politicians paying to be listed on her slate mailers—sample ballots traditionally mailed out to about 200,000 voters in Los Angeles highlighting whom she supports.

Since 2004, the campaign in turn reportedly has paid $750,000 to the congresswoman’s daughter, Karen Waters, or her public relations firm Progressive Connections for help producing them.

A government watchdog in July filed the first of two complaints with the Federal Election Commission asking for a full audit of the Citizens for Waters campaign.

I think I’ve read something about this somewhere…

If you set a trap for others, you will get caught in it yourself. If you roll a boulder down on others, it will crush you instead.

But, as someone that’s been ‘sent by God’ to oppose Trump, I’m sure Rep. Maxine already knows that.

We’ve spent so much time on Maxine Waters and the #Resistance… let’s cleanse our palate with something pleasant — like our wonderful First Lady.