Why wouldn’t the party that calls everyone they don’t like ‘literally Hitler’ threaten our own law enforcement with modern Nuremberg Trials?

So committed are the Democrats to their long game of open-borders and illegal immigration (for reasons they candidly admit are concerned about gaining Perpetual Political Power, not about the rights of any ordinary plebe on the street). From a leaked Memo by Democrat Valeri Palmieri:

It finished, “If Democrats don’t try to do everything in their power to defend Dreamers, that will jeopardize Democrats’ electoral chances in 2018 and beyond.” — Fox News

How committed are they to these open borders?

They are so committed that they’ve taken to demonizing ICE.

If you are a US government official and you are deporting Americans be warned. When the worm turns you will not be safe because you were just following orders. You do not have to take part in illegal acts ordered by this President's administration. https://t.co/BLq48HRkbH

It sounds like he is threatening law enforcement with retroactive retribution, doesn’t it? He swore an oath to uphold the law… is this an example of him trying to OBSTRUCT it?

And is he complaining about illegal acts ordered by the President?

You mean… enforcing the laws … written by Congress, of which he is a member?

Just in case it somehow gets deleted, Gallego wrote:

If you are a US government official and you are deporting Americans be warned. When the worm turns you will not be safe because you were just following orders. You do not have to take part in illegal acts ordered by this President’s administration. 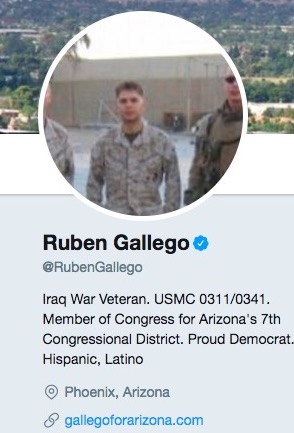 News flash. If you are being deported FROM America… you are NOT an American.

This shouldn’t require explaining, especially to a member of Congress, but then again, we’re in 2018, so, let’s put on our ‘Captain Obvious’ hat for a moment.

If someone has a problem with the laws Congress has passed, how about you take it up with them. Because they have the power to change the law. Everyone else is expected to abide by and enforce it. Or don’t Democrats believe that little juicy fact anymore since Mr Pen and a Phone tried to change the rules?

Has anyone else noticed he’s calling the President ‘illegal’, without evidence?

But this same guy would freak out over the formal, legal language of ‘Illegal Alien’ being used to describe the people whose unlawful presence in America (sometimes after several prior deportations) is among ICE’s many varied duties.

And this guy is involved in WRITING our laws?

However badly you may want to convince yourself that we are in 1930’s Germany, we’re not. So maybe dial down the rhetoric about Nuremberg, and get back to the business of … whatever it is the Democrats have been doing instead of participating in their Congressional responsibilities.