Here is how CNN is undermining trust in the media.

The Media (D) was hesitant to call the car ramming into a barricade outside of British Parliament a terrorist attack.

However, after a couple of hours, that’s exactly what happened. 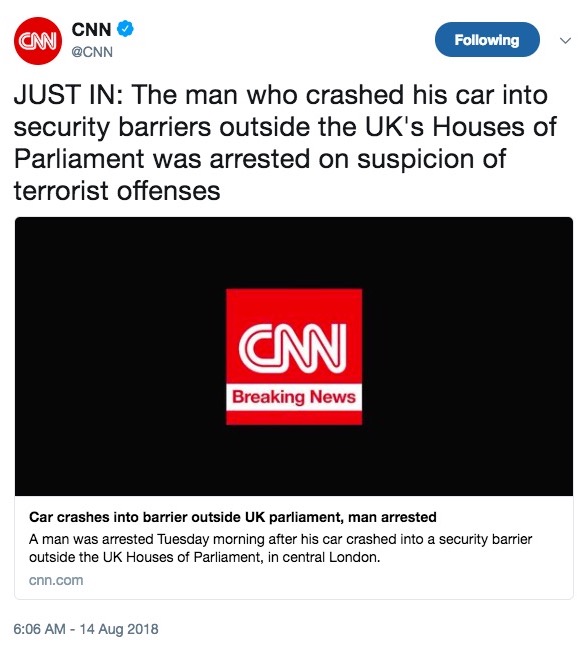 Take note of the time stamps on the tweets — those are in Eastern time.

Here’s CNN reporting on that at 7:07 Eastern:

NEW UPDATES from police on Westminster car crash:
• Appears deliberate
• Being treated as a terrorist incident
• Suspect arrested at scene is not cooperating with police
• No other suspects identified
• No evidence of any further dangerhttps://t.co/H5dmp39ofI pic.twitter.com/kUxiwJGXy3

The Associated Press reported that the police were treating the incident as a terrorist attack, and did so at 5:44am. 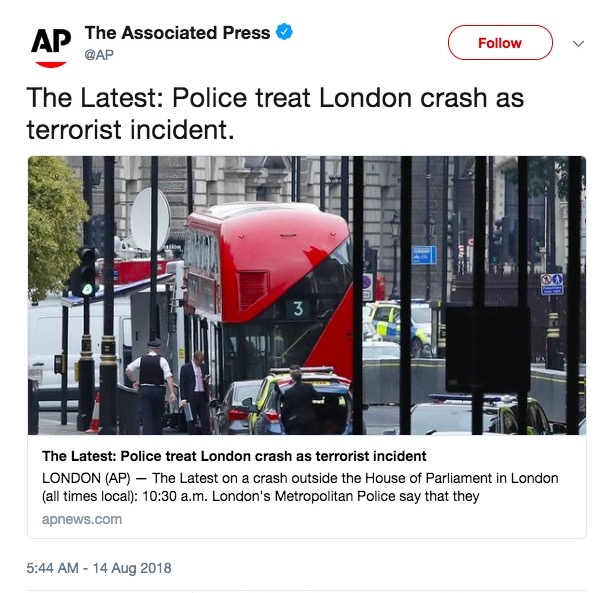 The BBC said police were treating it as a terror attack at 5:36 am.

Even the mayor of London, Mr. Terror-Attacks-Are-Part-Of-Living-In-A-Major-City, tweeted that it was being treated as a terror attack at 6:17 am:

A man has been arrested after a car was driven into barriers outside the Houses of Parliament. Police have confirmed that the incident is being treated as a terrorist act. All Londoners, like me, utterly condemn all acts of terrorism on our city. https://t.co/9gFu3HYtae

Another terrorist attack in London…These animals are crazy and must be dealt with through toughness and strength!

But take a quick gander at what CNN Politics did at 9:31 am: 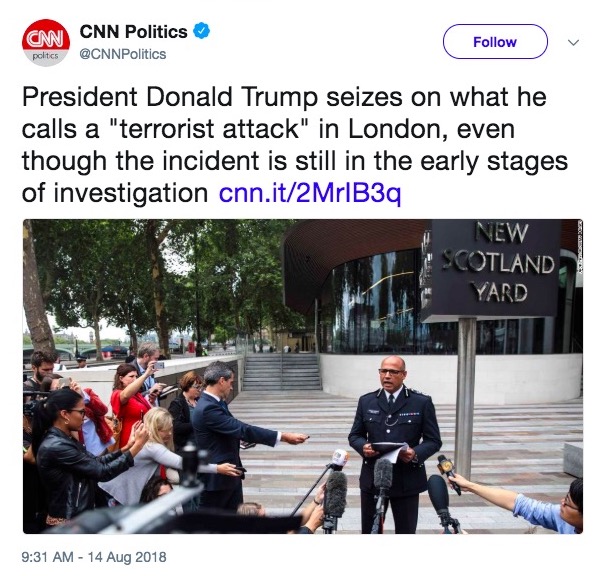 CNN Politics says, ‘OMG! Can you believe that President Donald Trump is calling this a terror attack?’

The headline implies that President Trump is simply making an assumption, but their own network had been reporting for hours that it was indeed being treated as a terror attack by police.

It’s this shaping of the narrative that makes many lose confidence in the objectivity of the media.

The link then takes you to this article by Jennifer Hansler:

Which is still using the term terror attack in quotation marks.

In it, Hansler writes:

President Donald Trump on Tuesday again seized on what he called a “terrorist attack” in London to call for tougher anti-terror measures, even though the incident was still in the early stages of investigation.

Speaking of ‘seizing on’ something… Hansler seized on Trump’s tweet and wrote an entire nonsensical article that is being passed off as ‘reporting’.

After directly quoting the tweet by the President, Hansler then wrote:

Metropolitan Police in London were investigating the event — in which a car crashed into security barriers outside of the Houses of Parliament during rush hour Tuesday morning — as a terrorist incident. The driver, a man in his late 20’s, was arrested at the scene on suspicion of terrorist offenses. He was alone in the car and no weapons were recovered at the scene.

Then, after explaining that the officers from the Counter Terrorism Command are taking the lead on the investigation with an ‘uncooperative’ suspect, she swings right back to Trump’s tweet.

In addition to declaring the incident a “terrorist attack” before officials in London, Trump said the perpetrators are “animals.” Earlier this year, Trump defended himself for calling some undocumented immigrants “animals,” saying he was referring to the gang MS-13. Trump was unapologetic about his language and said he’d use it again.

That claim that President Trump said it was a terrorist attack before officials in London is patently false. But hey, ‘Facts First’, amirite?

So, the President is being condemned for repeating what multiple news outlets — including CNN — have reported for at least 2 hours. Then, 2 hours after that, CNN condemns him for it.

Why would CNN try to pass off this trash as ‘journalism’?

CNN is an embarrassment. A disgrace.

CNN has been called everything from the Clinton News Network to the Communist News Network for obvious reasons. No matter what the letters stand for, this network is clearly a Left-wing propaganda machine.

This new t-shirt says it all… CNN Sucks!

If someone on your gift list agrees, your shopping just got easier.

Give them a way to mock the Fake Media wherever they might happen to go.