How does a crazed Lefty top that Tweet about wishing the President’s boy is thrown in a cage with a pedophile? By inviting his followers to commit a crime, of course!

What does a privileged leftist do when ‘we the people’ don’t vote the way he wants us to vote?

He suggests a way that the Free And Fair Democratic Process™ can be ‘helped along’.

You wouldn’t want to leave these things to chance, or the possibility of the unwashed masses voting ‘wrong’ again, would you?

David Hogg would be so proud of his Fellow Militant Leftist’s opinion of just what kind of a difference those ‘young people’ can really make.

Then we have to take them by the hand and lead them to the water and teach them to drink! If you have a millennial in your family, take their early ballots, fill them out and mail them in, or take the ballot to the voting place and give it to the officials… no more worrying! https://t.co/wiDXP9sl60

No worries. The internet is forever. 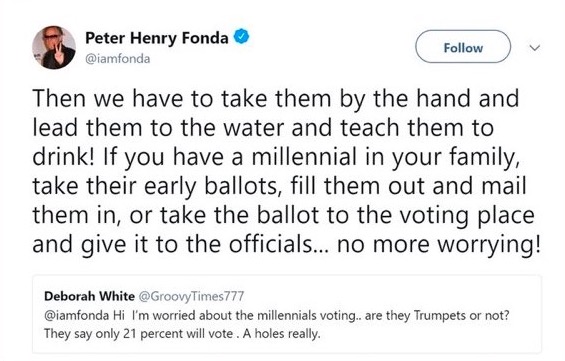 It’ s a little hard to take the ‘Trump is a threat to Democracy’ line seriously when the ‘Resist’ crowd has taken an ‘ends justify the means’ approach to prove to the rest of us that the votes of the ‘little people’ — meaning that small sliver of America tucked between LA and New York — really don’t matter.

I guess their side only believes in ‘smooth transitions of power’ when the baton is being passed to them.

And they call themselves the ‘Democratic party’??? They got caught fixing their own PRIMARIES for crying out loud!

Trump is our President: Deal with it.

As for the woman living in the White House? She’s about the farthest thing you could get from Hillary Clinton. What a relief!