There is not enough dental floss or toothpaste left in the world to rescue the American church from its severe battle with truth decay.

I often hear people talk about how crazy things have become in the world and my friends often laugh at the snowflakes that we see whining on television. But what we see on the streets of America is nothing more than the consequences of the truth decay so prevalent in America’s churches.

The salt has lost his savor. That is what Jesus warned us about during his sermon on the mount. That unless the church held fast to the reigns of Biblical morality the impending results would be a good-for-nothing form of Christianity.

Look around you and you see the impact of this truth decay everywhere you look.

Jesus commanded us to be “the salt of the earth.” In some of His final thoughts before leaving this earth He charged His followers with both a commission and a commandment. Being a Christian was, and still is, so much more than “accepting Christ” and “going to heaven.”

“Go into all of the world”, I paraphrase him in Matthew 24, “and teach them all things that I have commanded you.” “Go” is the commandment and “teach” is the commission. The American church has not done a very good job of either one.

In fact, the exact opposite has happened. As Christians have remained glued to the pews the world has crept into the sanctuary and has replaced the Truth of God’s Word with a lie. The world has become the salt of the church. The church has become so worldly and the world so churchy that it is often hard to tell the difference between the two. 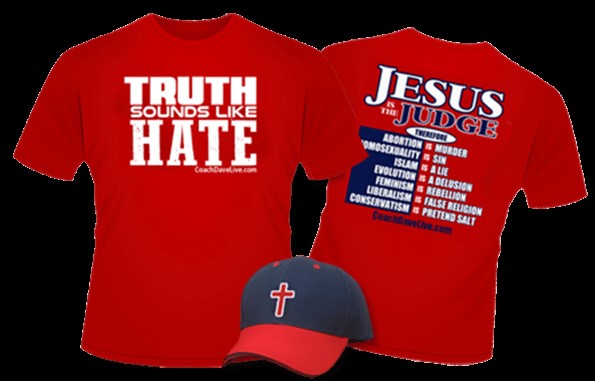 Truth decay has taken the bite out of God’s Word. That is why our shirts have become so popular. Some of us still realize that “The Truth sounds like Hate to those who Hate the Truth!! (You can get one here.)

As America becomes more and more secular the church has become less and less effective. In a desire to be relevant and accepted the church has adopted the ways of the world. Instead of the church going into the world, the world has flooded into the church.

Truth is not an opinion. Truth is based on facts. Despite what you may have been taught in your local indoctrination center, something is not true simply because one believes that it is. So much of what is being taught in our schools and in our news today simply is not true. Truth does not have two sides to it. Truth is not “fair and balanced.” Truth does not have a political label. Truth stands alone.

I am not sure whether truth decay leads to laryngitis or whether laryngitis leads to truth decay but no matter how you slice it, the silence of the church has lead to this decomposing of society.

Here are just a few cavities.

Abortion is murder. It is not a “choice. A baby is not part of a woman’s body. Fifty percent of the babies in a woman’s womb have male attachments; they all have their own separate DNA and blood type. Given time and food the “fetus” will grow into a full-fledged human being. Why doesn’t the church rise up and stop it? Truth decay.

There is no such thing as a transsexual. Bruce Jenner will always be Bruce Jenner no matter what he has wacked off and regardless of the makeup he puts on. If they were to exhume his remains 500 years from now and run a DNA test he will be categorized as a female by the intrepid scientist who does the tests. Bruce Jenner is, and always will be, a man. Why does the church accept such foolishness? Truth decay.

Men cannot “marry” Men. The term “marry” comes from the word “marriage” which is defined as “the act of uniting a man and a woman for life.” It is actually a synonym for the word “matrimony” which can be translated in Latin to Matri (mother) mony (to make) …hence matrimony is the act of granting a woman the right to be a mother. Holy Matrimony is what the church used to call it. It was God’s idea. It came from the Scriptures. Two men can never consummate a marriage. Why are so many churches compromising on this simple fact? Truth decay.

God hates all sin. He sent His son to die in order to destroy it. God is not ok with sin. He is not ok with sinners. Not everyone goes to heaven. Hell is real and many are on headed there. No matter what the world tells you it is important not to do some things simply because “it feels good” to do so. The Scriptures tell us that God, who is love, “is angry with the wicked every day.” We are warned that God “hates all workers of iniquity”, and that those whose names are not written in the book of life shall be “cast into the lake of fire.” If you are living your Best Life Now you be in a heap of trouble!! Truth decay.

God is VERY intolerant, (He says He is the ONLY way), He loves judgment, and we are warned to “flee immorality.” In fact, John 3 teaches that “apart from Christ the WRATH of God abides” on the sinner.

If God loves the sinner but hates the sin could you please answer one simple question for me? Is it the sin or the sinner that gets thrown into the Lake of Fire?

If you don’t mind me borrowing from the Doobie Brothers…Jesus is not just all right with you.

In ain’t merely Fake News. It’s Truth decay. And it is deadly.