How exactly do threats of violence fit into the Left’s self-serving rhetoric of ‘we go high’?

Notice the ‘love Trumps Hate’ sign in the midst of the same crowd.

“I would murder him for the people”.

“for the people”, you say? What about all the people who DON’T want him murdered? He IS up over 50% approval now, you dummy.

Considering that, Trump’s approval rating is higher than Obama’s was at the same point in his presidency… 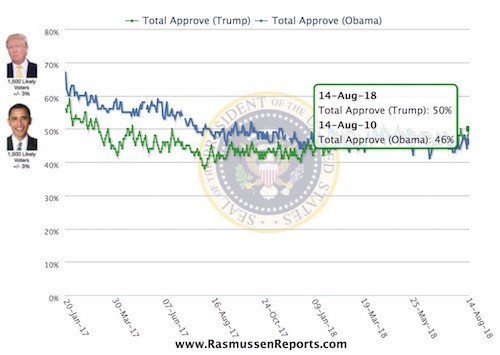 …by that very same ‘logic’, he would also want to assassinate the PREVIOUS president eight short years ago, given a chance.

See how dumb that is?

But wait, there’s more! Other people at this ‘Love Trumps Hate” group had things to say bout our President. Things like:

“We gotta take him down.”

“If it was a group effort, we’d have to do him like Gadaffi.”

In case you forgot what is meant by ‘doing him like Gadaffi’, allow Hillary to elucidate.

“I wanna smack the s*** out of him” (Notice the big grin on his face while he describes his little fantasy.)

One of the weirder and more creative threats was, “I think I’d piss on his leg.”

There were some others, too. Including a reference to Melania.