Another brilliant idea from the un-funny alleged-comedienne, Kathy Griffin.

It looks as though she’s as smart as she is funny.

She thinks that the Manafort decision is going to be the downfall of President Trump.

She’s so confident that this is the beginning of the end of the Trump era that she celebrated Paul Manafort’s guilty verdict — 8 of 18 charges — with a topless dance. She was kind enough to share it on the internet.

They say that ‘sharing is caring’, but I’m not so sure if it is in this case.

I’ll bet that Griffin’s Trump-supporting neighbor is absolutely thrilled that she put up that wall once he heard about this latest stunt.

Fortunately, it was just a video of her from behind.

Of course, as one of the stalwart ClashDaily editor, I had to search ‘Kathy Griffin topless’ and that’s going to be in my search history now.

It turned up these:

.@kathygriffin just sent me this photo of her outfit for New Year's Eve. She's kidding, right? Please tell me she is pic.twitter.com/GT2vfZ1lsO

Now I’m getting a message on my computer politely requesting that I use BleachBit on it.

It seems I’m not alone.

The comments on her video were merciless: 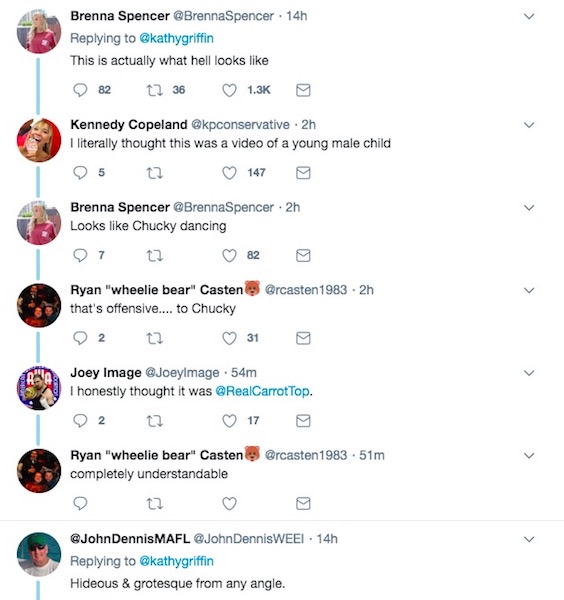