Dear America: is there nothing better that we can spend our time doing than scouring old yearbooks from hoity-toity prep schools? The answer to that is, sadly, no.

Alright, then. Let’s get to this.

The confirmation hearing of Brett Kavanaugh to the Supreme Court has become a non-stop circus. And now, journalists are actually digging into his high school yearbooks searching for evidence that he was a potential attempted-rapist.

Is this the depths that we have sunk to?

But there’s an interesting twist to this story.

There has been a big hullaballoo over Brett Kavanaugh’s high school yearbooks from his time at Georgetown Preparatory School.

Those articles include the ‘problematic’ references to binge drinking, a ‘party’ atmosphere, and sexist attitudes toward women. Yes, I know it’s shocking that an all-boys preparatory school in the 1980s would have such cavalier attitudes towards alcohol and girls. Did they learn nothing from that classic feminist film, 9 to 5 that had come out just a few years earlier?

They apparently took their cues from John Belushi and not Dolly Parton.

If you look at any of the articles cited above, you’ll see stuff like this:

Questioning what the term ‘boofed’ meant. 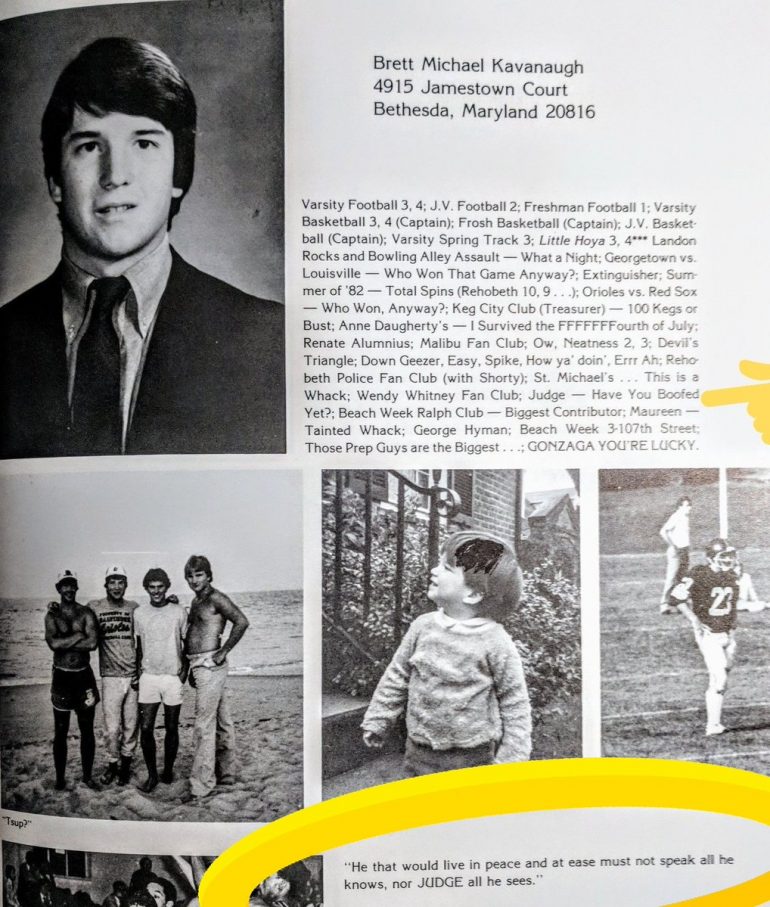 Then this one that points to the caption of the top photo, ‘Prep parties raise questions of legality‘ and the bottom photo, ‘Do these guys beat their wives?‘ 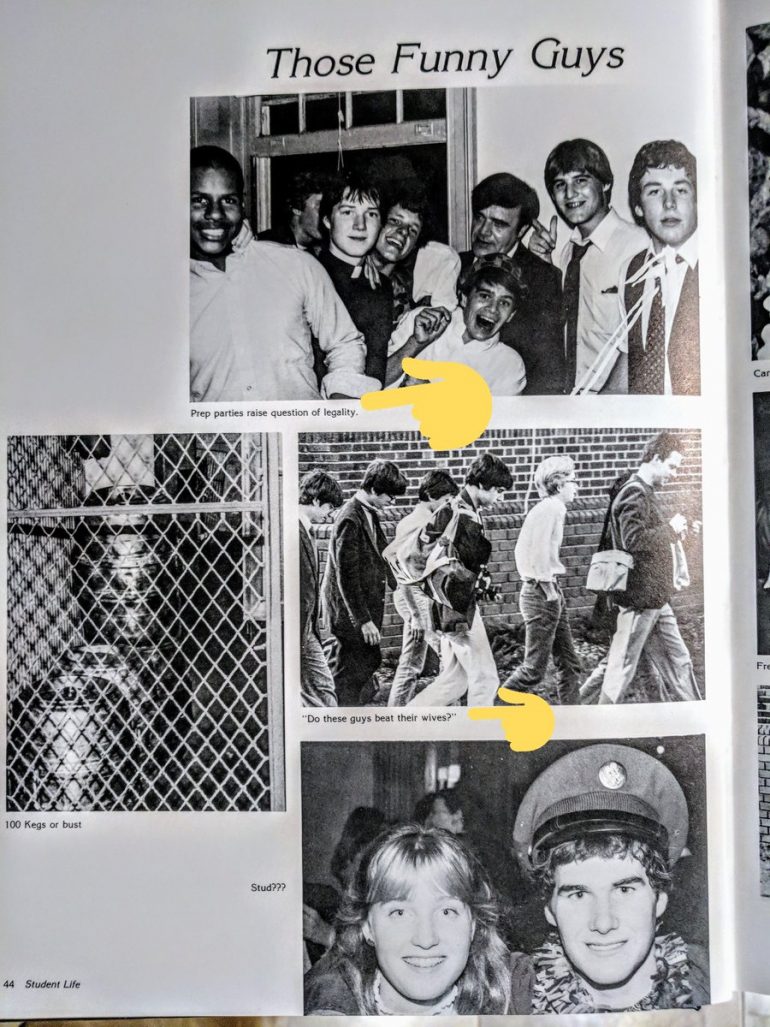 More questions about ‘boofing’ and a raised eyebrow about a quote chosen by Kavanaugh’s friend, conservative writer, Mark Judge: 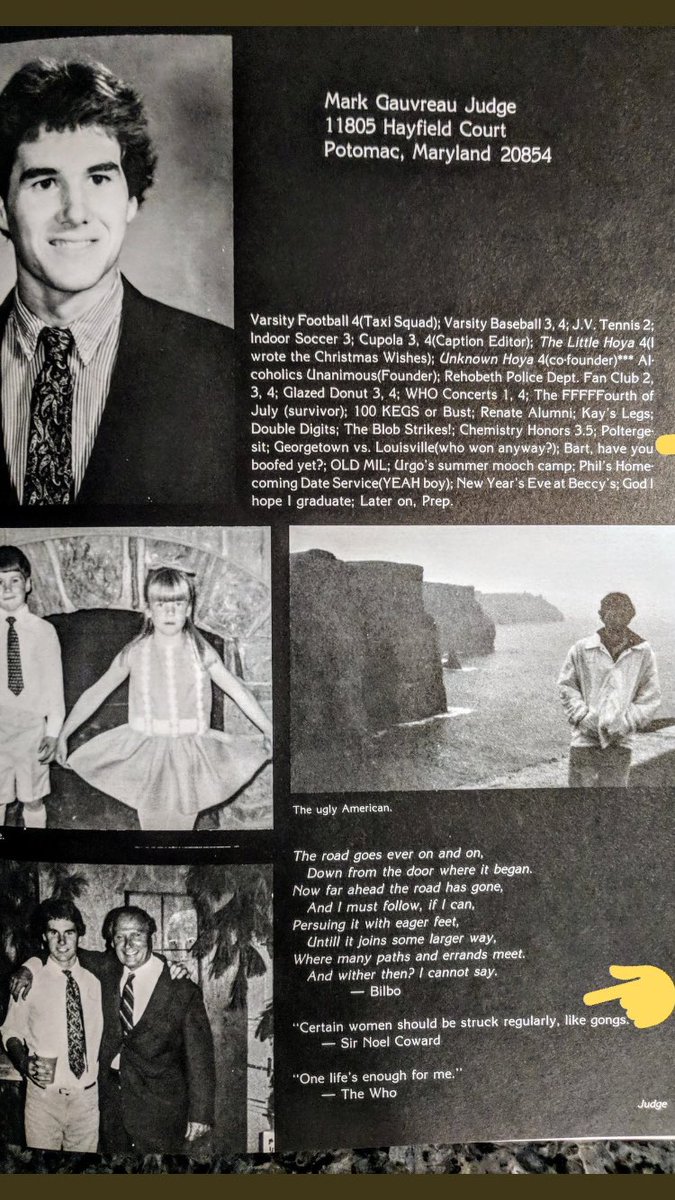 Trust me, you don’t want to know what the speculation is on that one. But, if you just can’t help yourself, well, here you go. Scroll at your own discretion. Consider yourself warned.

Sen. Elizabeth ‘Fauxcahontas’ Warren (D-MA) posted a pearl-clutching tweet of a video of Brett Kavanaugh making a joke about his Georgetown Prep days.

I can't imagine any parent accepting this view. Is this really what America wants in its next Supreme Court Justice? pic.twitter.com/WhL8YeZQ78

And that’s just the tip of the iceberg.

Of course, Yearbooks don’t ever contain any inside jokes amongst friends, right?

Strangely, the yearbooks from Holton-Arms, ‘Scribe’, have been scrubbed from the internet, some say as recently as Monday.

One blogger, Cult of the First Amendment, has captured some photos of what are he/she claims are the yearbooks from the years 1982, 1983, and 1984 before they were wiped from public access.

They were not much better.

Considering Holston Arms is an all-girls school, some might say it was worse. 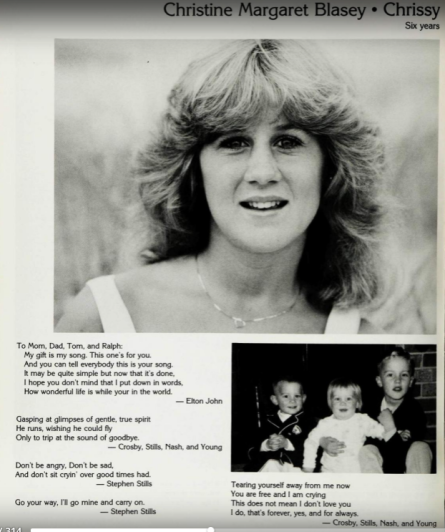 Here’s a photo from the yearbook showing what was popular in 1982, including Daiquiri’s [sic], Molsen, and Heiniken [sic]. 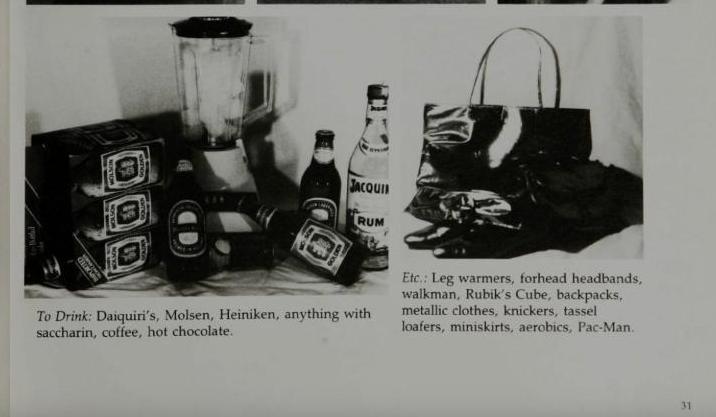 There are multiple photos of underage drinking, and the article titled, ‘Celebrate Good Times‘ touts the ‘boys, beer and the ‘Zoo’ atmosphere.‘ This alongside photos of girls with beer cans piled up. The caption of one photo is, ‘Come on, you’re really too young to drink.’ 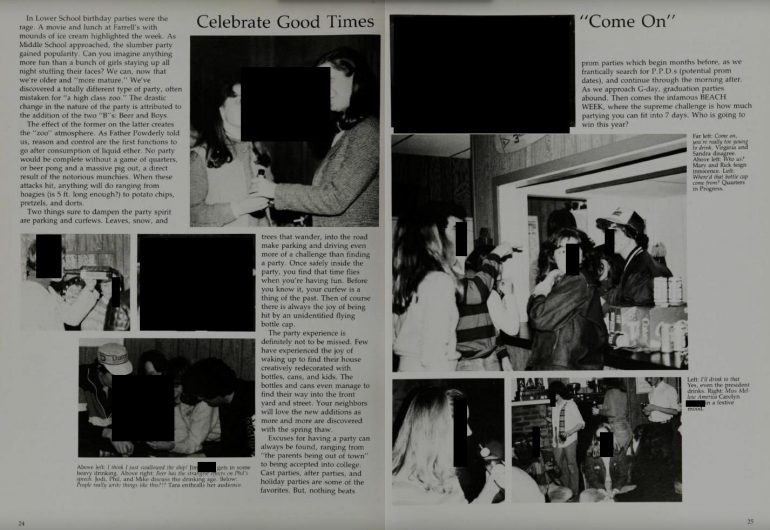 The party scene was a big deal says Scribe 1983. Here are some photos that describe the wild party days. The caption reads, ‘In case you weren’t into the Holton party scene, here is a brief glimpse at one of the calmer get-togethers.’ 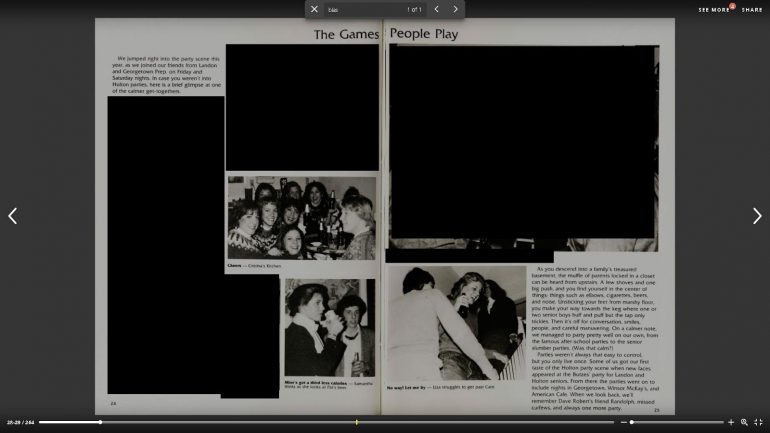 ’82 was a party year, it seems. With some promiscuity tossed into the mix.

‘Beach week culminated the year for those of us lucky enough to go. With school and our minds in temporary recess, we were able to release all those troubling inhibitions of the past year. While dancing in the middle of coastal Highway, Ann [redacted last name] and friends picked up some men who passed out in their apartment…’

Yes, that was included in the YEARBOOK. 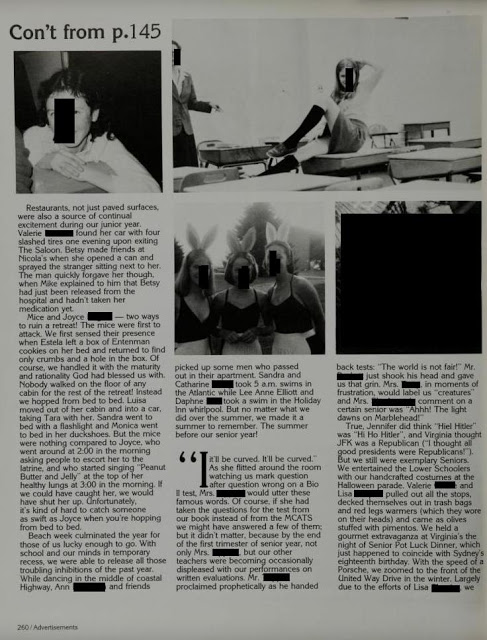 Scribe ’84 talks about all those high school parties when parents weren’t at home. Including one gathering that got out of hand after people arrived with ‘several cartons of beverages slightly toxic to the human system‘ which caused not one, but many people to vomit on the heirloom Persian rug. 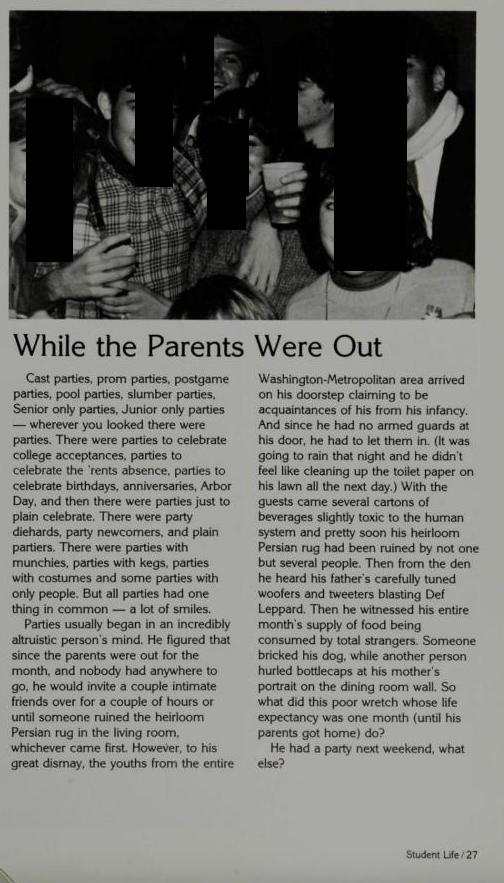 In the Scribe ’84, Dr. Blasey Ford’s senior year, here’s an article that describes how the senior year girls conducted themselves.

‘Other seniors preferred to expand their horizons and date younger men, usually sophomores, who could bring the vitality and freshness of innocence to a relationship.’

Is it just me, or does that make those older girls sound like predators looking for fresh meat?

And this final quote that explains that the drinking until passing out was ‘an integral part of the party scene.’

‘And there were always parties to celebrate any occasion. Although these parties are no doubt unforgettable, they are only a memory lapse for most, since loss of consciousness is often an integral part of the party scene.’ 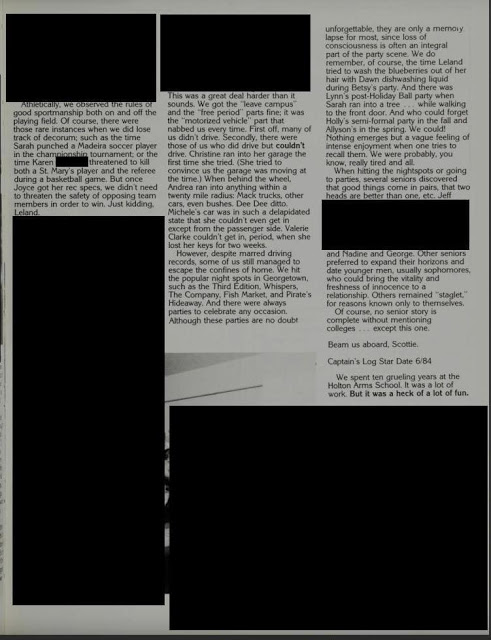 Interesting that Kavanaugh’s ‘party school’ culture is making it onto CNN, but Blasey’s similar school culture is not.

So, what does all this matter? Not much, really, except the blatant bias of the Media (D).

It just shows you that in the 1980s, things were different, and at these two elite prep schools, it was totally fine to reference partying, drinking, and whatever.

The issue is that one school’s yearbooks are making headlines and the other school’s isn’t.

Dr. Christine Blasey Ford must be heard (if she wants to be heard), believed, and supported at all costs, and Judge Brett Kavanaugh, with his six successful FBI background checks and impeccable record must not.