Is there a pool yet for how long until Democrats find some way to turn this monster into another poor victim?

While all the world was losing its collective mind about whether or not a seventeen-year-old adolescent did or did not grab at some girl at a party 36 years ago, people were literally dying in the streets.

They were being beaten to death by a baseball bat.

As if being homeless wasn’t difficult enough, several of this man’s victims were homeless men who got the further indignity of being beaten with bat …in their sleep.

Some were killed, by the ordeal. Some managed to survive it.

Here was a ‘wanted’ ad in the local paper: 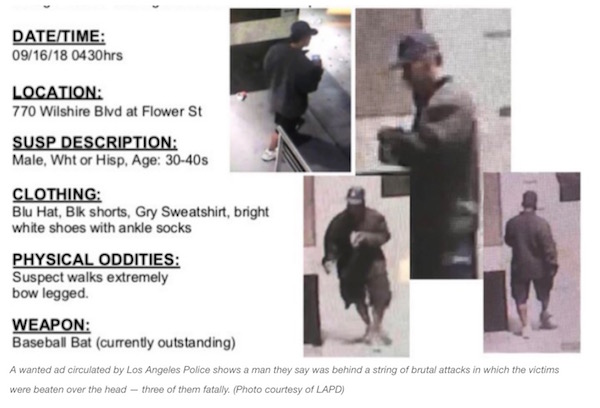 A man who fled to California from Texas after being questioned in the disappearance of two Houston relatives was arrested on suspicion of bludgeoning seven men, three fatally, in a string of Los Angeles-area attacks on mostly homeless victims, police said on Tuesday.

Ramon Escobar, 47, an El Salvador native and convicted felon who has been repeatedly deported from the United States, faces three counts of murder and four counts of attempted murder in a case investigators plan to present to prosecutors on Wednesday, authorities said.
Source: Huffpo

Repeatedly deported? Aren’t we routinely told that conservative concerns about the security of our nation are overblown, and that immigrants are far less prone to crime than native-born Americans?

Isn’t that the excuse for pushing back whenever someone raises various “build the damn wall” concerns? Even supporters of Trump are getting antsy about the GOP neglect of border security.

"Adios America!" finally makes it to the Ivy League! https://t.co/ZCIPFoTrMs

This guy didn’t just kill and rob random strangers, either. He fled Houston after being under suspicion in the disappearance of his own family members.

Ramon Escobar, nephew of missing persons Dina and Rogelio Escobar, was arrested in Santa Monica, California, yesterday. He's a person of interest in their disappearance in Houston. Our investigators want to speak with him. No other information at this time. pic.twitter.com/sUpD7oePUf

We do notice how CBS called him a ‘Texas Man’. They’re not even TRYING to hide their biases anymore.

A Texas man suspected of killing three people and seriously injuring four in a 17-day string of attacks on sleeping Southern California men – most of them homeless – had been deported from the United States six times and had a long criminal history, immigration officials said Tuesday night.
Source: CBS

And WHY was he deported?

Escobar was first ordered removed from the country in 1988 and was deported to his native El Salvador six times between 1997 and 2011, ICE said in a statement Tuesday night.

He was released from ICE custody last year after appealing his latest immigration case, ICE said, but the agency didn’t offer any information about his current legal status.

Is there anything else we need to know?

He had a criminal record and may have been deported previously as a felon, according to Hayes. He served five years in a Texas prison from 1995 to 2000. His record includes an arrest for assault in November 2017 and another for criminal trespass in February 2018.
Source: LAist

Hang on… do you mean to say a man who had been deported multiple times was arrested TWICE in the last year?

How do you explain the fact that he was even HERE when he decided to go on this brutal killing spree? (*yes, yes… ‘alleged’ killing spree. Either way, still a felon.)

Sometime between Aug. 26 and Aug. 28 — Dina and Rogelio Escobar disappear.

Aug. 30 — Ramon Escobar is questioned by police as a person of interest because he had been living with them. He leaves Texas shortly thereafter.

Sept. 5 — Escobar arrives in L.A., possibly after traveling along Interstate 10.

Sept. 8 — A person sleeping on the beach around the 1800 block in Santa Monica is violently assaulted, suffering blunt force trauma to the head. The person is hospitalized and later released but has no recollection of the incident.

Sept. 10 — Another person sleeping on the beach in the same area is violently beaten, also suffering blunt force trauma to the head. Police said this victim remained in a coma.

Sept. 16 — Three homeless men sleeping on the street in downtown L.A. are attacked by someone with a baseball bat in the vicinity of 5th Street and Wilshire Boulevard — again suffering head trauma. Two of them later die from their injuries.

Sept. 20 — Another man is violently assaulted and found dead under the Santa Monica Pier. He is found to have similar injuries.

Sept. 24 — Another man is attacked at 7th and Colorado in Santa Monica and found with the same injuries. Police find Escobar in the area and arrest him. Police said the victim in this attack was still in a coma.
Source: Laist

Is it time to finally talk about that wall?