Senator Feinstein (who employed a Chinese spy for about two decades) wants to throw the book at a sitting judge, despite saying “I can’t say everything is truthful”.

Where was that profound interest in victim’s justice when her team was under the microscope?

Feinstein was so very concerned about the privacy of a victim (alleged victim, actually, Kavanaugh hasn’t had a chance to face his accuser yet) that she waited until her party had no other cards to play than hers.

And then they played this one with all the force they could muster.

With some help from her Senate friends including Cory “I groped a breast” Booker, Bob “Hung Jury” Menendez, and Sherrod “Restraining Order” Brown who, only weeks ago called it ‘shameless’ that his own record of the alleged mistreatment of his first wife ‘from decades ago’ be brought up — with help from those men — a man with a heretofore unblemished record is being painted as a sexual predator on the simple say-so of one woman.

And the personal reputation of a sitting judge is in the process of being destroyed on the allegation of one woman — and no witnesses — of whose story even Feinstein said ‘I can’t say everything is truthful’.

So ‘committed’ is she to the truth that the other Senators who will be considering the candidacy of Judge Kavanaugh are denied access to the one piece of documented evidence by which the whole confirmation process was unceremoniously derailed.

After weeks of screaming ‘show us the documents’ we learn that Democrats have themselves been sitting on the single most relevant document since July.

Feinstein is suddenly very “interested” in female victims, is she? Juanita Broaddrick, for one, finds that very interesting. She didn’t always have such an interest. Here are a few of Juanita’s recent tweets:

Hollywood and Moveon(dot)org put together an I believe the victim video. But it was later modified in a way they had not intended.

This is cool how Daily Wire altered the liberal @MoveOn video. ?????? https://t.co/xxucrTPQ3U

Did they really think that we had all forgotten that even the NAME ‘move on’ was a message to the right to ‘Move On’ and stop talking about Bill’s numerous sexual accusers? And these people have the gall to wrap themselves in the #MeToo movement?

There was a trolling of Chuck Schumer in there:

Dear Hillary, do you wish you’d kept your mouth shut about Kavanaugh? It’s sorta like when you tweeted “all victims of sexual assault should be believed”
You should get advice before speaking….because, evidently, you are dumb as dirt. https://t.co/ijwtKM7ChO

Ms. Broaddrick brought up what you might call an ‘Inconvenient Truth’:

To this day, the friend who found me 30 min after Bill Clinton raped me, as well as four others I told, support my allegations. They have never wavered. https://t.co/EQS1BwGPyg

Feinstein: We’re Better than this.
Me: NO YOU’RE NOT- now or back in 1999 when you @SenFeinstein refused to read my deposition for the independent counsel, along with ALL Democrats. Your vote had already been decided before testimony. SHAME ON YOU. https://t.co/hutyYkuIsg

I had first hand knowledge, along with 5 witnesses – 8 YEARS later in 1999. YOU @SenFeinstein refused to read the evidence in my record. You are such a hypocrite! https://t.co/RoqIvaOLEg

But really, what should we expect from these people? I had a question of my own (in response to Knowles’s mocking of the allegations themselves:

If this vetting process insists that we dig into Kavanaugh's teenage past, on what basis are the taxpayer-funded sex scandal payouts for members of Congress being kept under wraps?

Now THAT question might make a few people sit up and take notice… especially if any of those same people are conducting the hearings!

How about as part of ‘disclosure’ we identify which of those voting on this hearing have a conflict of interest in this area, and insist they recuse themselves… of course, this may become rather awkward when the votes are cast, won’t they?

Behold the ‘integrity’ and ‘protection of victims’ we’re seeing from the party of (former Deputy Chair of the DND and candidate for Minnesota’s AG) Keith Ellison whose ex-girlfriend has medical evidence to substantiate her accusations,  convicted sex offender Anthony Weiner, disgraced New York AG Eric Schneiderman (four female accusers), any number of politcally-friendly news media types, an unknown number of people in the House whose accusers have been silenced with taxpayer money… and who else? 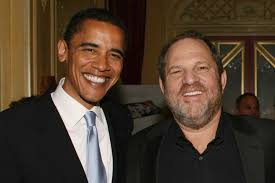 Oooh. There’s an awkward photo. Not quite ‘posing with Farrakhan’ awkward, but it’s up there.

Did the DNC ever give back all the money they raked in from their favorite money guy, Weinstein? Of course not. It would bankrupt them.

You would have us all believe this isn’t political, that this is purely in the interest of justice. Juanita had one other tweet that replied to that view perfectly.

Really? We don’t know what you believe/support? Your twitter name is “resist 45”. SMH https://t.co/BsPGDyESrw