Leave it to Hollywood to flip a moment of national celebration on its head.

Remember the Space Race? It’s ok if you don’t. It WAS 50 years ago next July.

It concluded when America showed the world its technological dominance by putting the first man on the moon.

That stood as a defining moment in history where all the world held their breath.

People around the world huddled together and gasped while watching what America accomplished as a nation. And, just like clockwork, along came Hollywood to mess up the story.

They might operate out of America, but Hollywood is selling their stories around the world to a lot of people who hate America as much as — or even more than — some of their own leftist elites.

These are the people who never miss a chance to hold America up to international shame.

But when it comes to moments in history where America truly shines, what do they do?

Good little globalists that they are, they turn it into an ‘international’ victory… with a Canadian actor who stupidly praises the absence of Old Glory in that famous moment.

Starring Ryan Gosling as Armstrong, the film begins in 1961 as the US trails the Soviet Union in the space race and takes viewers up to the Moon landing in 1969.

But it came under fire for not including the moment the astronauts planted the American flag, with Gosling defending the decision by saying the achievement ‘transcended countries and borders.’

Marco Rubio was among the politicians to weigh in, tweeting: ‘This is total lunacy. The American people paid for that mission,on rockets built by Americans, with American technology & carrying American astronauts. It wasn’t a UN mission.’

Canadian actor Gosling said he believes the moon landing was widely seen as a ‘human achievement’ and that’s what the film reflects.

He added that Armstrong, who died in 2012, was ‘extremely humble’ and deferred focus from himself to the 400,000 people who made the Apollo 11 mission possible.
Source: DailyMail

Hey Ryan… would that have been 400,000 Americans, by any chance? Way to hijack the accomplishments of others and claim them for your own.

Go ahead and try and find yourself a single Soviet that was alive back then and ask if he thought it was a ‘global’ victory.

Was it? Or was it a burning national humiliation watching their own technical prowess pale in light of American greatness and a single iconic flag?

JFK dreamed big, and rallied the nation around a Big Idea. The moon.

And we went there. Buzz isn’t a big fan of this Globalist Revisionist Schtick. 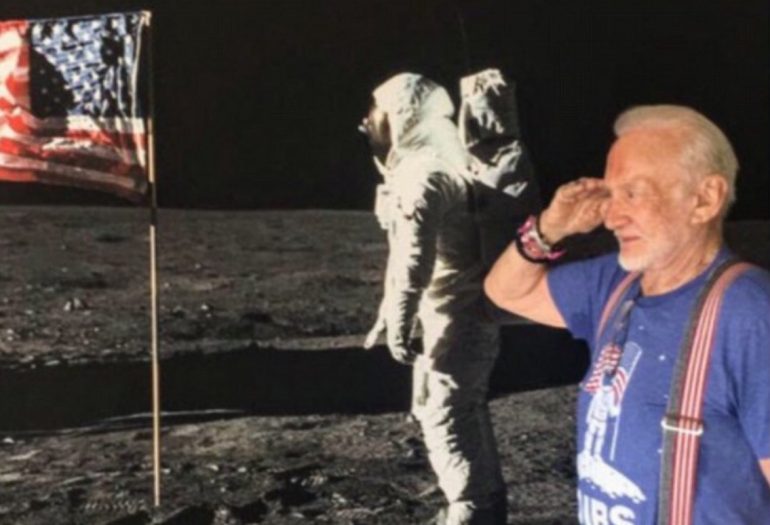 The first thing I do every morning is put the American flag up on my balcony; and every night I take it down, and
properly fold and store it. It’s saddens me how few people do this anymore. #proudtoserve #mycountry #ourfreedom #usa #ifyoustandfornothingyoullfallforeverything pic.twitter.com/Aapi8fuDJX

It’s been very close to 50 years since we walked on the moon.

Now, to our embarrassment, we’re hitching rides to the International Space Station on Russian Rockets.

NASA has not been pushing the envelope in Space exploration or even a meaningful presence there. They’ve been focused more on things like Climate Change. And then, there were those now-infamous instructions Obama had given to NASA:

“When I became the NASA administrator, (President Obama) charged me with three things,” Bolden said in the interview which aired last week. “One, he wanted me to help re-inspire children to want to get into science and math; he wanted me to expand our international relationships; and third, and perhaps foremost, he wanted me to find a way to reach out to the Muslim world and engage much more with dominantly Muslim nations to help them feel good about their historic contribution to science, math and engineering.”
Source: Space

But change is on its way.

Since his election, Trump has repeatedly vowed to send people back to the Moon for the first time since 1972, in preparation for the first human missions to Mars in the coming decades.

“When it comes to defending America it is not enough to merely have an American presence in space, we must have American dominance in space,” Trump said.

He has also promised fewer regulations, so as to speed up the process private industries must go through before launching a rocket or satellite.
Source: Phys Org

It looks like Buzz would approve of this new direction: 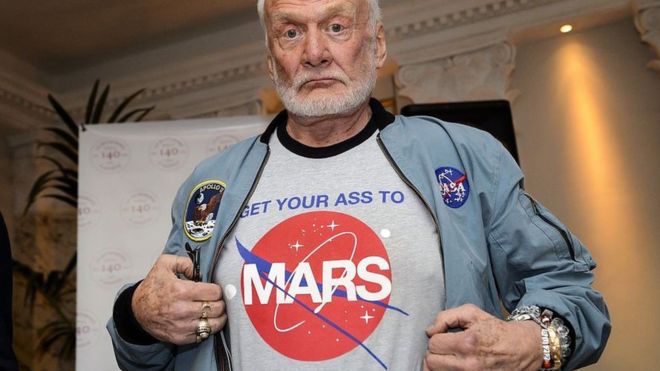 Is It Time To Make Space American Again?