First, we had Chelsea Clinton touting how abortion is a major boom for the economy, and how it’s ‘unchristian’ to go back to the days before Rowe v. Wade.

Now progressives want to boldly declare the death of the unborn as not a big deal with a collection of stories that can be showcased on a coffee table.

Coffee table books are known for their beautiful photographs. What horrors will this book contain?

Likely none. (I am saying ‘likely none’ because of the bizarre fixation with feminists and vagina costumes.)

The point is to normalize abortion and remove the stigmas attached to it.

The #ShoutYourAbortion movement began in 2015 by a woman who was really grateful for her abortion. Since the hashtag caught on, many more women are sharing their stories and they have been collected into a book.

Amelia Bonow, a Seattle bartender, wanted to talk about her abortion.

In September 2015, she posted on Facebook: “Like a year ago I had an abortion at the Planned Parenthood on Madison Ave, and I remember this experience with a near inexpressible level of gratitude.”

Her friend, the writer Lindy West, shared her post on Twitter, hashtagged it #ShoutYourAbortion, and a movement was born.

People who had abortions and who supported abortions cropped up across social media channels to share their stories with the SYA hashtag.

On the ShoutYourAbortion website, they show a few images of what you can expect in the book. Mostly photos of women with their story. But two previews are rather heartrending for those of us that are Pro-Life — two women with their young children.

Of course, these are the siblings of the innocent children that they so callously murdered in the womb. 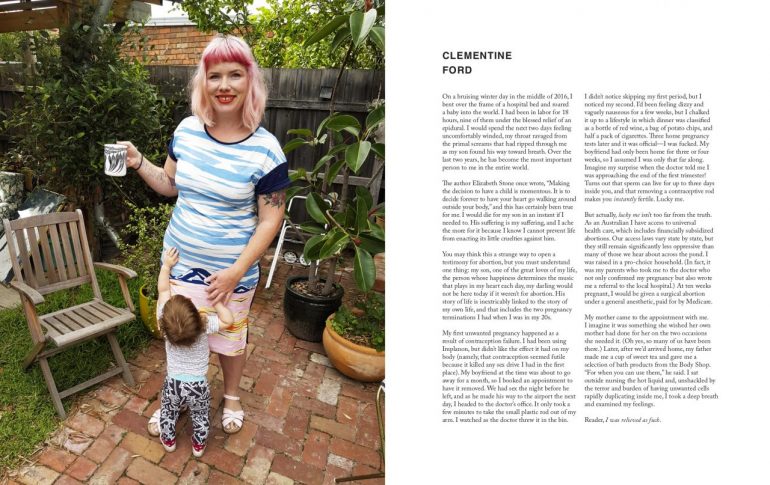 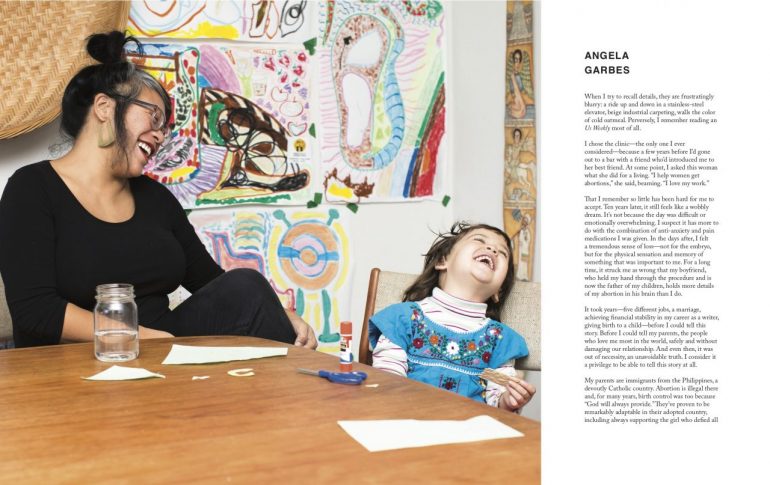 Look at those great moms having so much fun with the children they chose not to abort!

Just because you chose to kill one of your children, it doesn’t make you a bad mom, amrite?

The movement is attempting to end the silence around abortion and make it a cultural norm as they claim that it already is.

There are also some ‘artistic’ photos included as well, including these of the ‘abortion fashion’ that activists have created. 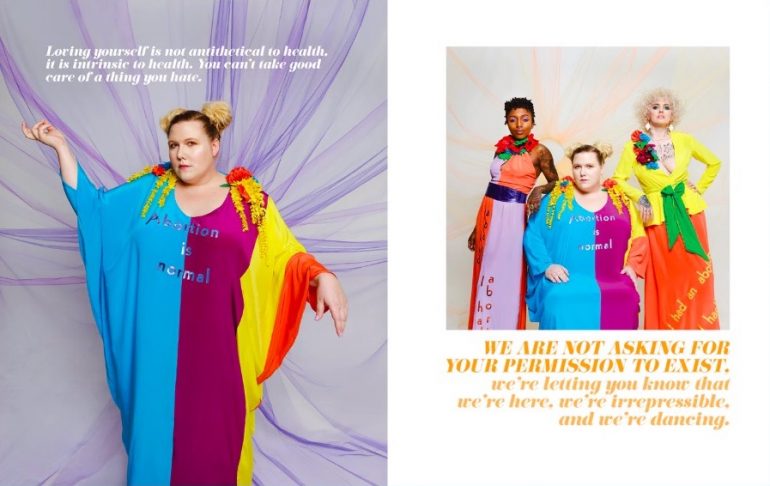 The image on the right says, ‘We are not asking for your permission to exist. We’re letting you know that we’re here, we’re irrepressible, and we’re dancing.‘

The unborn children that these progressive women aborted don’t have that kind of luxury, do they?

Maybe they should have asked for the permission to exist and they could be irrepressible and dancing, too.

That first woman, Amelia Bonow, spoke to KUOW and said that art is important in pushing to normalize abortion.

The expectation of silence around abortion isn’t just interpersonal, it’s cultural. Collectively, we need art to help us get comfortable with the reality of complex issues like abortion—it’s easy to act like something isn’t happening when it’s not happening in films, on television, in music.

I think we should be making and engaging with all sorts of creative work about abortion, and of course fashion is part of that. It has been since the beginning. The way I see it, the conversation about abortion is starting to percolate to the surface in all kinds of ways, and stuff like abortion positive t-shirts are a part of the overall change.

Read an essay from the forthcoming #ShoutYourAbortion book: https://t.co/cYWLBeBHgS

"I do not regret my decision not to carry my pregnancy to term… I wish we had a health care system that valued black women’s bodies…" pic.twitter.com/GD0c8UclL2

There was a whole series of videos showing how Planned Parenthood valued the bodies of aborted fetuses — some of which would have been black and female — by putting a price tag on their body parts.

They valued them, all right.

One woman valued them so much that she joked that she wanted a Lamborghini as a result of the sale of fetal tissue.

And if you really want to get into it, Margaret Sanger, the racist eugenicist founder of Planned Parenthood thought abortion was a great way to get rid of black people. So, she put a ‘value’ on black women, too. She considered them unworthy to reproduce.

Here are some real quotes by the deplorable Margaret Sanger:

Abortion is not something that’s done quietly anymore. Women are ‘Shouting’ their abortions.

It’s not something that is ‘rare’ as they attempt to normalize it.

When asked by KUOW about the art and activism that was used in celebrating the (terrible) legal decision of Rowe v. Wade, Bonow said:

Increased visibility in all contexts. Regardless of who you are, where you live, your politics, your faith, you know people who have had abortions. Our culture is all warped about abortion because the anti-choice movement has made abortion seem like a bad thing that bad people do, instead of a normal thing that normal people do. SYA is simply empowering people to tell the truth about their lives. That specific installation was one of hundreds of similar actions we’ve done, putting our faces and stories in a huge range of public spaces. People who have abortions are everywhere, and stuff like this forces them to think about that.

How far we have fallen in our acceptance of the unacceptable.

The unborn are silent and are being slaughtered as a matter of convenience.

Can you think of anything more horrific than retroactive birth control because of a lack of self control?