Well, that didn’t go the way she expected.

I will continue to maintain that the greatest untold story in the Trump era is the sudden chutzpah that has been discovered by previously milquetoast Republicans.

We’ve seen the badassery of Senators ‘Cocaine’ Mitch McConnell and Lindsey ‘Grahambo’ Graham, as well as the stunning courage of Susan Collins on the Senate floor especially after all of the angry protests and frightening threats she received.

One woman boldly stated on social media her intent to harass lawmakers in the Senate hallways and basement to protest Brett Kavanaugh’s confirmation. 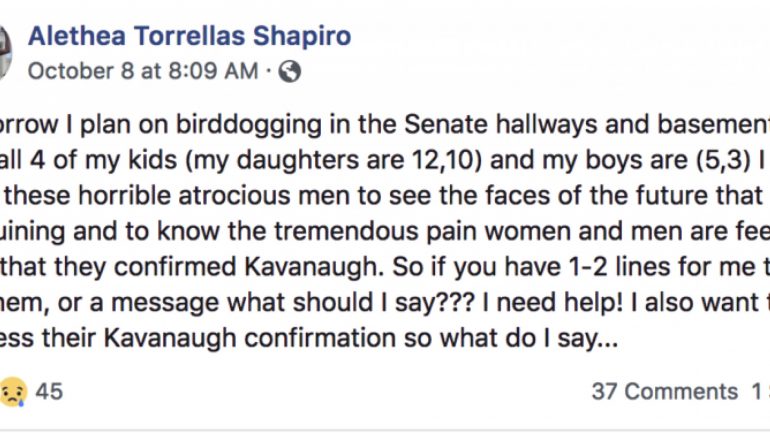 She saw Senator Bill Cassidy (R-LA) and the interaction didn’t go quite as she expected.

“Senator Cassidy, can you please apologize to my children for ruining their futures?” the protester called out to Cassidy in a video uploaded to Facebook on Tuesday.

But Sen. Cassidy didn’t play along the way Sen. Jeff Flake (R?-AZ) did when confronted by Soros-funded women in an elevator with cameras rolling.

Sen. Cassidy revealed that he does indeed have cajones and won’t be bullied by hysterical protesters.

“Hey, guess what?” Cassidy immediately replied after removing his earphones and turning to two young children sitting in a hallway inside the Hart Senate Office Building, near the Capitol. “I know your parents are using you as tools. In the future, if somebody makes an allegation against you, and there’s no proof for it, you’ll be OK.”

Protester demands that GOP Senator @BillCassidy "apologize to my children for ruining their futures.”

Cassidy looks at the kids: “Guess what? Your parents are using you as tools. In the future if somebody makes an allegation against you & there’s no proof for it, you'll be OK." pic.twitter.com/y6WKtPhpYO

While once-pervasive anti-Kavanaugh demonstrations at the Capitol and other sites have subsided in the days since the new justice’s confirmation, as senators return home to their constituents until after the mid-term elections, top Republicans say so-called leftist “mob tactics” will become a hallmark of this election cycle.

Liberal protesters – egged on by Democratic politicians – have openly embraced a more confrontational and aggressive approach, banging on the doors of the Supreme Court, confronting lawmakers outside their offices and chasing GOP officials and their wives out of restaurants.

The anti-Trump Resist crowd hasn’t stopped since November 2016, and it’s only getting worse.

The circus that surrounded the Kavanaugh confirmation was absolutely appalling, but the Media (D) doesn’t want you to call the mob a ‘mob.’

A mob is a large, disorganized group of unruly people harassing people with whom they disagree, and well, that’s obviously not what that was about, right?

People can protest, but this targeted harassment campaign to disrupt people in their everyday lives is just ridiculous and possibly dangerous.

It was only a year ago that Republican members of Congress were shot at by a nutty Bernie Bro specifically because of their political stance on issues.

It needs to end. Where are the reasonable Democrats calling for it to stop?