If she could pick someone for her own daughter to clerk for, it would be him.

Do you REALLY think someone like ‘Tiger Mom’ would suffer fools — or scumbags — gladly, especially with respect to her own daughter?

She put her own credibility on the line in writing this about him in the Wall Street Journal.

The original piece is behind a paywall, but for a sense of her thoughts, another page cited part of her op-ed:

Judge Brett Kavanaugh’s jurisprudence will appropriately be dissected in the months ahead. I’d like to speak to a less well-known side of the Supreme Court nominee: his role as a mentor for young lawyers, particularly women. The qualities he exhibits with his clerks may provide important evidence about the kind of justice he would be.

To a person, they described his extraordinary mentorship. “When I accepted his offer to clerk,” one woman wrote, “I had no idea I was signing up for a lifelong mentor who feels an enduring sense of responsibility for each of his clerks.” Another said: “I can’t imagine making a career decision without his advice.” And another: “He’s been an incredible mentor to me despite the fact that I’m a left-of-center woman. He always takes into account my goals rather than giving generic advice.”

These days the press is full of stories about powerful men exploiting or abusing female employees. That makes it even more striking to hear Judge Kavanaugh’s female clerks speak of his decency and his role as a fierce champion of their careers.

If the judge is confirmed, my daughter will probably be looking for a different clerkship. But for my own daughter, there is no judge I would trust more than Brett Kavanaugh to be, in one former clerk’s words, “a teacher, advocate, and friend.”
Source: RNLA

Washington Times had something similar:

The women said Judge Kavanaugh achieved “rare gender parity” on the Court of Appeals for the D.C. Circuit, hiring 25 women and 23 men as law clerks.

“And he has sent 21 of those 25 women clerks — an impressive 84 percent — on to clerkships at the Supreme Court,” they wrote. “We are proud that so many of those hires have been talented women.”
Source: Washington Times

Notice how it’s hard to square these reports from people who KNOW Kavanaugh and have worked with or under him with some of the wild claims that he’s some kind of sexual predator?

Some news outlets claimed that she said something about the ‘kind’ of woman Kavanaugh hires. She strenuously denies saying what they claim she had said.

As some of you may know, there have been stories about me in the recent news cycle. All the claims are outrageous and 100% false. Here is a statement I released to the Yale Law School community: pic.twitter.com/sAiL5Fbv30

Here is one student that personally knows her responding to the claim, and speaking about what kind of a mentor she has been.

One of the most infuriating parts of the last few weeks has been the garbage published about my friend Amy Chua. I just wrote a note to the Yale Law School dean defending Amy. Here's the meat of it, for those interested. pic.twitter.com/bRpy6xa8c1

But haters are still gonna hate. 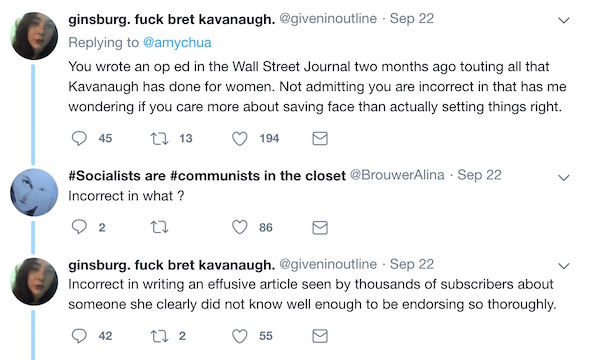 This is the ‘fair shake’ any Republican nominee can expect from here on in.

And in case you think this opposition is specifically because it’s Kavanaugh and not a naked Democrat power play, have you forgotten all those glossy signs that were printed for protesters to wave out when the nominee was announced?

They DID have glossy signs printed out for the other candidates, too.

Her daughter clerked for Kavanaugh — a man who mentors women and helps many of them go on to clerk for the Supreme Court.

Which of the two do you suppose would give the better and more nurturing environment for a young professional woman?