When Alex Jones Social Media platforms ‘went dark’, we told you a move like this was coming… and now it has.

Zuckerberg’s Fascistbook has unleashed an ‘October Surprise’ of his own, unplugging 800 pages, including a great many prominent conservative voices, from the worldwide digital platform.

Not that it was ‘political or anything’.

Or that this was part of the Left’s Battle Plan from the time they got spanked in 2016.

Oh, wait… there WAS this little document they published, that spelled it out in detail, conveniently titled: ‘MEDIA MATTERS WAR PLAN 2017”

These same Media Matters that gave a detailed plan on how to destroy the online presence of the political right decided to gloat about the ‘Great Purge’ (or if you prefer, Facebook’s Digital Kristallnacht). Note how they tried to portray it as ‘nonpartisan’, and taking down ‘offenders’ on both the right AND the left.

Here’s what they’re saying about it:

Facebook’s takedown removed a plethora of bad actors who have used networks of pages and groups to coordinate and amplify the spread of anti-immigrant and racist content. However, other similar far-right disinformation pages on the platform are still up. Three other major networks that have regularly spread viral far-right propaganda and false news are connected to the fake news sites TruthFeed, Mad World News, and The Political Insider. All three of these networks recycle the same meme narratives as America’s Freedom Fighters and Right Wing News’ Facebook pages do, but they have been unaffected by Facebook’s recent action.

And although this takedown has impacted a number of pages that push false political news and hate speech, it likely won’t affect currently active high-performing right-wing meme pages and networks.

Since these studies were published, right-wing meme pages have continued to thrive on Facebook — and they have continued outperforming all other types of political pages. In our earlier studies, between January 1 and July 1, 2018, right-leaning and left-leaning pages had virtually the same average weekly interaction rates (number of interactions per post divided by page likes), while right-leaning meme pages had twice those interaction rates.
Source: MediaMatters

Oh look, they have recognized that memes are funny, and dangerously effective. Memes like these: 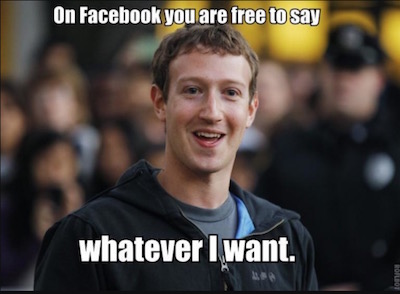 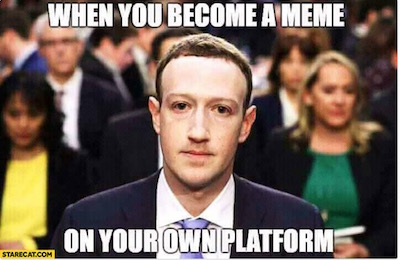 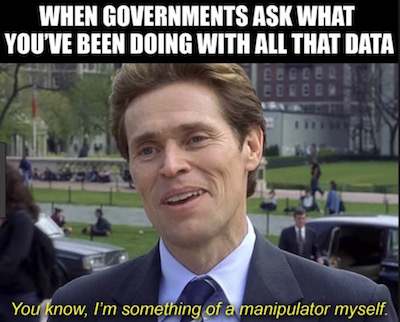 Maybe that has something to do with why they are now illegal in Europe, and Facebook is also actively rooting out ‘offensive memes’.

What did our own Doug Giles, the Big Dawg here at ClashDaily have to say about the Great Purge? Plenty:

ClashDaily.com engages in Misleading Users? Yeah, right. ClashDaily.com doesn’t trade in subtleties and deceit. We are a hard-charging, patriotic mosh-pit, that loves freedom, family and our flag and don’t mind challenging them that don’t with truth mixed with an irreverent sense of humor. Our brand of no-bullshit news reporting and op-eds have garnered us 230M page views in the last few years. If you define ‘misleading users’ as making them free thinking people versus Koolaid drinking Antifa clowns, then I guess we could be guilty.

ClashDaily.com‘s pages are administered by a fake account? That’s a joke. Our admin peeps have to double verify to login. Facebook has our driver’s licenses. In addition, my ClashDaily.com Facebook page was ‘blue checked’ approved by Facebook as being from me and not some zit-faced, content-farming, teen from Macedonia.

ClashDaily.com spams people? Uh, posting articles from your own website, to your own pages, is not spamming. Neither is sharing articles to private Facebook groups who love your content. Duh.

Yesterday afternoon ClashDaily filed an appeal which was quickly shot down in flames by Facebook’s Sanhedrin.

I believe Facebook made up the aforementioned vagaries so they could possibly escape the legal backlash that’s mounting against them and to pretend like they’re not against freedom of expression when everyone and their dog knows they’re trying to stifle freedom’s voice prior to the midterms. A myopic cyclops, with no eyebrows or eyelashes, staring into the sun can see that.

Ever since Trump got elected the insecure elite that make up Facebook’s ruling class have throttled back voices they disagree with on their Social Media(D) platform. The reason why is the voice of liberty is compelling and is winning over people by the millions and liberals can’t argue with it. Ergo, like good socialists, they start banning stuff. What’s next? Book burning?

Can you imagine being a part of a party, or system of thought, that is so delicate it has to make verboten speech it disagrees with? Wow … how lame. If I were a liberal, and my ‘leaders’ were into speech suppression, I would flee that lopsided ‘worldview’ because that weltanschauung has disaster written all over it.

Since you can’t find ClashDaily on Facebook any longer, you may subscribe to our mailer where we don’t need the permission of The Thought Police to communicate with you.

If Silicon Valley thinks they can lead a cultural revolt and cram they dystopian fantasy down our collective throat, they’ve got another thing coming.

ClashDaily is also moving onto a new platform, MeWe. It’s like Facebook without the data breaches and censorship.