When you pit one special interest group against another, somebody has to lose.

The XY chromosome competitor in the cycling race won.

It’s a recurring theme in women’s athletics competitions — one that undermines the whole point
of having a separate athletic system for female athletes.

We’ve covered this complex problem before.

Rhys "Rachel" McKinnon celebrates his victory over women ???? Congratulation! ????
We men are clearly superior to women, we even beat them at women's cycling ???? pic.twitter.com/IIfHCSUaNH

Now the other athletes on the podium are making their objections known.

‘No one is a transgender to steal anyone’s medal,’ van Herrikhuyzen wrote. ‘We had an honest race under UCI rules. If you compete you accept the rules, otherwise, don’t compete. I can only imagine what she had to go through in her life to be where she is now, how hard it is to fit in.’

Wagner had initially snapped back, writing: ‘Just because it’s a CURRENT UCI rule doesn’t mean it[‘s] fair or right. And rules can be changed.’

Wagner was the third-place finisher in the race.

Ask yourself: how many top competitors in men’s events have personal bests above the world record mark for the female equivalent of their event?

If gender is merely a social construct where science and biology have no meaningful role, what accounts for this difference?

At what point would society decide it’s not just coincidence that the women-who-stand-up-to-pee tend to outperform their XX counterparts in ‘fair’ competition.

Predictably, she got slapped down for being honest about the race. She’s been labeled a ‘bigot’ now. She’s backtracked on her specific comments but is still pushing for a rules change.

How did the activist take her apology? It was with the usual grace and class you would expect a ‘progressive’ activist to do pretty much anything.

The ‘winner’ of the race had this to say: 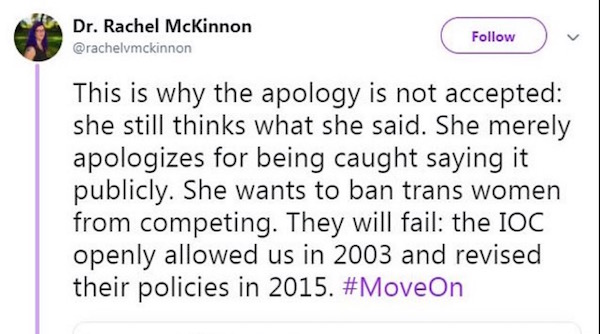 Sore losers in sport are bad enough. But a sore winner?

As a general rule, that’s absolutely contemptible, for men and women alike.By the way, since Facebook has unpublished ClashDaily’s page, your best bet to keep in the loop is to Subscribe to our ClashDaily Newsletter right here: