Adding insult to injury, Elizabeth Warren was put in her place by a very special person.

Elizabeth Warren has made a catastrophic series of choices that must have her PR team contemplating ritual seppuku as a way to wake up from her nightmare.

She’s completely immolated herself to the point that even the Onion is in on the joke.

It really is that bad. 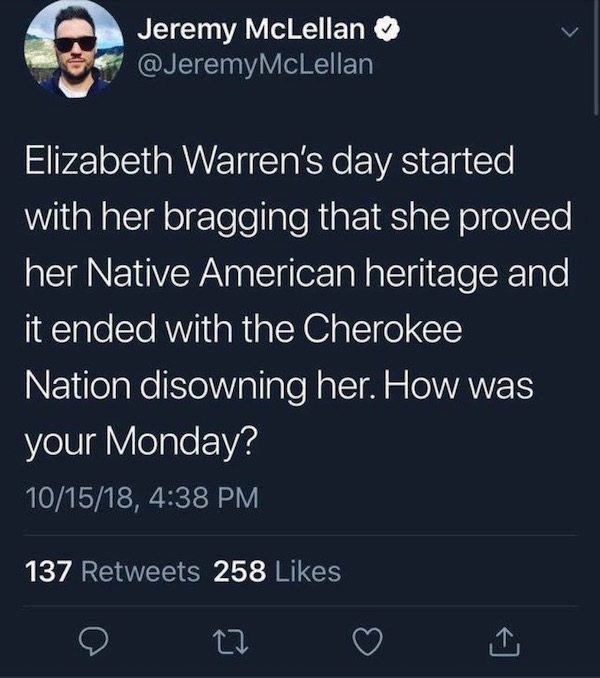 True story. An official announcement from the Cherokees themselves told her to knock it off.

Can it get any worse for her?

Of course it can. So much worse.

Adding insult to injury, the living personification of Trump’s taunt of Warren has weighed in.

An actual descendant of none other than the historical Pocahontas has joined the conversation.

She’s demanding an apology… not from Trump as some may have hoped, but from Warren.

Pocahontas descendant Debbie White Dove Porreco has called on Massachusetts Senator Elizabeth Warren to apologize for using claims of Native American heritage to advance her political career.
Porreco, who claims to be able to trace her lineage to historical figure Pocahontas, told Fox News that she believes her fellow Native Americans feel “betrayed” by Warren’s use of their heritage and culture as a platform for her political ambitions. “I think they feel betrayed, they feel disappointed, and at this point she needs to come back and apologize to everybody for what she’s done,” she said.
Source: Breitbart

The week isn’t even over yet!