Barry’s back shilling for Dems in the midterms, but will it make a difference?

If crowd size is any indicator, the answer is, ‘Probably not.’

We’ve been told that the Obama phenomenon was ‘unprecedented’ and that he is still the beloved President.

I even remember a poll in the Hill that revealed that a lot of Democrats actually would have canceled the 2016 Presidential Election if it meant that Barack Obama would have had a third term in office.

I’m also old enough to remember when President Trump was mocked for his statements on the size of the crowd at the Inauguration.

Check out the difference in crowd size:

Just so you can compare, here are the full images.

The Trump rally in Texas:

The Obama rally in Nevada: 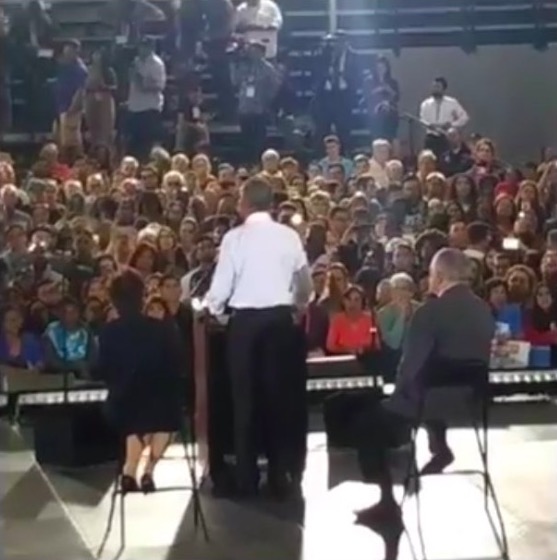 This guy from ShareBlue Media, (you can probably tell by its name that it is a blatantly leftwing organization,) is desperately trying to show that there were ‘lots of empty seats’ at the Trump rally in Houston.

So, there are actually a lot of empty seats at #TrumpRally tonight. pic.twitter.com/6XPfsKInxR

Yeah, those are box seats, genius. There’s probably a reason why they were closed off to the public.

Why does crowd size matter?

Well, it shows just how the Media (D) does its very, very best to shape the story. An actual ‘Facts First’ media wouldn’t have hidden the tiny groups of Hillary supporters in a high school gym while neglecting the thousands left outside of Trump rallies.

Of course, that might have tipped them to the fact that there was a lack of enthusiasm for Hillary Clinton as a candidate, but some real grass-roots support for Donald Trump.

And the ‘Deplorables’ still love them some POTUS DJT.

Check out this overflow crowd for a Trump rally in Montana:

The Media (D) won’t report on it as President Trump has repeatedly pointed out.

Well, maybe because their Messiah told them that they should believe in facts:

"Unlike some, I actually try to state facts," Former Pres. Obama at Las Vegas rally. "I believe in a fact-based reality and a fact-based politics. I don't believe in just making stuff up." https://t.co/WasNr7fAua pic.twitter.com/dJb4240F6T

But then again, so is Trump’s economy.