If you wanted proof that Facebook and Google’s election suppression tactics are explicitly partisan, look no further than North Dakota.

When you compare the social media posts being wrongly suppressed against the bogus stuff that ‘somehow’ makes the cut anyway, it begins to paint a clear picture of what looks an awful lot like deliberate election tampering.

It’s not even close.

What everyone knew when back people like Diamond and Silk were targeted for suppression is getting worse, not better.

And it’s all being done in the name of stopping ‘fake news’ and protecting against election interference (just like the published 2017 Media Matters War Plan said they would.)

They’re ‘on the side of angels’ they would tell us. Sure they are.

Here’s an example of what they’ve suppressed

Facebook admitted late Thursday that it improperly had removed two advertisements paid for by the pro-life Susan B. Anthony List that endorsed Republican Senate candidates.

On Thursday morning, the organization tweeted that Facebook had “banned” a 30-second ad supporting Rep. Marsha Blackburn, R-Tenn., in her race against Democratic former Gov. Phil Bredesen. The Susan B. Anthony List also tweeted a screenshot of an email from Facebook’s advertising team that read in part: “Some of your ads aren’t approved because they don’t comply with our Advertising Policies.”

On Thursday afternoon, the Susan B. Anthony List said that Facebook had restored the Blackburn ad and apologized for dropping it in the first place.
Source: FoxNews

So they’re on the job, searching for election-altering posts, and examples of voter suppression are they?

Yeah, not so much.

Here’s another ad that somehow made it past their algorithms and censorship team. Is it merely a coincidence that it’s both anti-hunting and pro-Democrat? 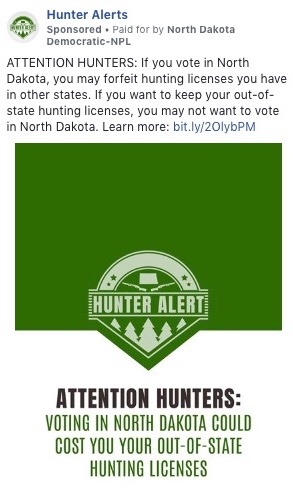 You can see all of the info on the Facebook advertisement right here.

The North Dakota Democratic-Non-Partisan League recently paid for a Facebook ad threatening the state’s hunters with the loss of their out-of-state hunting license if they vote in the upcoming congressional elections.

The ad, which was verified by Facebook and catalogued as a political ad paid for by the North Dakota Democratic-NPL, links to a page titled “Hunter Alerts,” which contains a number of logos but has no further information regarding the potential loss of hunting licenses.

North Dakota secretary of state Al Jaeger was at a loss to explain what the ad might refer to when contacted by local blogger Rob Port.
Source: National Review

It turns out there WAS no such policy. It’s a lie.

For a state where voter suppression is already a political talking point, and this same lying group dumped $3 Million into Heidi Heitkamp’s campaign, this should be a big story.

Odd how Facebook didn’t think it was all that important, eh?