Nature’s fury is one of the few things from which immeasurable wealth CANNOT protect you.

Rich and poor alike can be swept away by the fury of a hurricane or flood, for example.

The same can be said of wildfires.

This one is a monster.

This picture from Malibu is biblical.

Hearing about ash raining in my part of town. Does anyone have a link to a fire fighter organization to donate to? #CaliforniaFire pic.twitter.com/ExATXq7ZS8

And getting to safety is a nightmare.

Cell phones are knocked out. Fuel is an issue. Things are desperate.

The so-called Camp Fire has already consumed over 20,000 acres in Northern California, forcing about 50,000 people to evacuate. But the fire has moved so quickly that some people have barely escaped—like Brynn Parrott Chatfield from the town of Paradise, who posted this video to social media showing her family’s terrifying drive through the flames yesterday.

The video, published to Facebook, truly looks like something out of a movie. They’re surrounded on both sides with flames lapping at the road as they race to get out.

“I feel very vulnerable posting this but I feel I should,” Brynn Parrott Chatfield wrote on Facebook. “My hometown of Paradise is on fire. My family is evacuated and safe. Not all my friends are safe. It’s very surreal. Things always work out, but the unknown is a little scary.”
Source: Gizmodo

I feel very vulnerable posting this but I feel I should. My hometown of Paradise is on fire. My family is evacuated and safe. Not all my friends are safe. It's very surreal. Things always work out, but the unknown is a little scary.*******————EDIT———*********We are overwhelmed by all your heartfelt responses and prayers. There are so many wonderful people in this world. I would love to respond to each of you. We are astonished at the outpouring of love. Paradise has been destroyed. Thousands of us have lost our homes. Many have lost everything, including their lives. But, there are are so many stories of heroism, bravey and service, so much good comes from bad. We had no idea this video would touch so many others. Although my family lost our home and business, we are in need of nothing, just love and prayers. There are so many that have absolutely nothing and need help. Any money made by licensing this video will go to others.For licensing or usage, contact: licensing@viralhog.com

It takes a certain level of courage and desperation to drive through a landscape that looks more like a war zone than an upscale paradise, surrounded on both sides by fire and smoke, while sitting in a vehicle filled with gasoline, not knowing whether it would hit the flashpoint.

This ‘Heaven’ has turned to hell for many of the people whose homes have been consumed by the flames. And the list of victims includes some household names.

Kim Kardashian and Kanye West’s Calabasas home, Caitlyn Jenner’s mansion in Malibu and even the famed Bachelor Mansion have been hit by the devastating wildfires overtaking Southern California.

The Woolsey Fire reached the Kardashian-West pad in the Hidden Hills neighborhood on Friday afternoon, according to TMZ.

Around the same time reports emerged that Jenner’s 3,500 square foot, four-bedroom pad overlooking the Malibu beach was destroyed by fierce flames from the same blaze.

Meanwhile, Lady Gaga’s mansion nearby in Malibu was seen surrounded by a blanket of thick smoke as the wildfire overtook the beachside city before moving toward Oxnard.

Will Smith posted a video to his Instagram story expressing worry that his own home would be hit by the flames as the path of destruction continues.

Hundreds of thousands of residents in Southern California have been ordered to evacuate as the Hill and Woolsey Fires move westward toward the Pacific Ocean.
Source: DailyMail 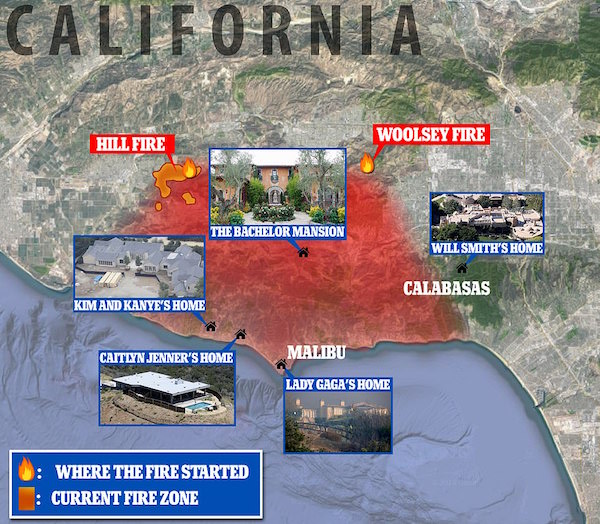