Shockingly, a conservative independent journalist was banned from Twitter for questioning a newly-elected member of Congress. Actually, that’s not shocking at all.

Laura Loomer, a self-proclaimed conservative journalist, is a bit of a controversial figure in the rightwing movement. Some of her reports have been bang-on, but she has also gone way too far. For example, when she lost her verification badge, (the coveted ‘blue checkmark’,) she compared it to the Holocaust. That’s a bit much. (By the way, Loomer is Jewish.)

There was also the time that she was ‘protesting’ by shouting that conservatives are being banned on Twitter during a Congressional hearing when Jack Dorsey, (Twitter’s CEO,) was speaking. She was drowned out by Sen. Billy Long (R-MO) using his auctioneering skillz, and it was kind of epic.

She’s known to be a bit of a conspiracy theorist.

Some within the conservative movement don’t even consider her ‘conservative’ at all, because some believe that she goes far enough to actually be labeled ‘far-right’.

That said, she often asked the hard questions that needed to be asked, like when she exposed Rep. Maxine Waters (D-CA) hypocrisy on her call to harass conservatives in public places. Ironically, Rep. Waters doesn’t want to be confronted in the hallway and says that Loomer should call her office and have a reasonable sit-down chat.

So, in my not-so-humble opinion, Loomer is a mixed bag when it comes to being the face of ‘conservative’ journalism.

This decision by Twitter to permanently ban Loomer, however, is utterly ridiculous.

At first, Loomer was simply suspended in late October — right before the midterm election — for her tweet. Loomer had an impressive 265,000 followers before her suspension.

What was so offensive to the Twitter gods that they determined that a suspension was not enough?

Questioning Twitter for using the image of pro-Sharia congresswoman-elect, Ilhan Omar, with the headline celebrating ‘women, LGBTQ, and minorities’. Apparently criticizing Sharia isn’t allowed. Or maybe it was her calling out Twitter for their awareness-fail. 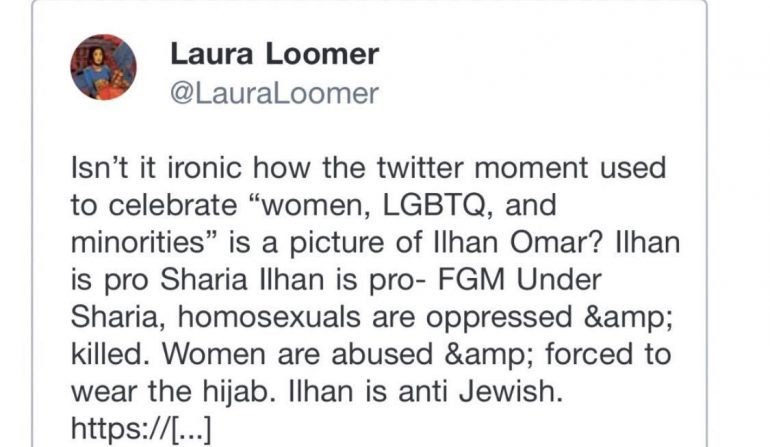 Yes, a Jewish woman was banned for accurately saying how Sharia oppresses both women & gays.

Will the feminist & LGBTQ communities please stand up? pic.twitter.com/pCJ7gYPJ30

She was permanently banned for that?

Of all the things that she’s tweeted, this is the one that they chose to clamp down on? The one saying that Sharia and the western concept of freedom don’t mix? That’s objectively true. How is that ‘hateful speech’?

An activist and self-described investigative journalist, Ms. Loomer said she plans to sue Twitter for punting her from the platform Wednesday over a tweet that targeted Ms. Omar, a Somali immigrant and the first Muslim former refugee elected to the U.S. House of Representatives.

Ms. Loomer said that Twitter told her that her account was suspended because a recent tweet accusing Ms. Omar of being anti-Jewish and supportive of Sharia law and female genital mutilation violated the platform’s rules against hateful conduct.

“Everything I said is 100 percent true. There’s not one thing in that tweet that isn’t true,” she added.

To make matters worse for Loomer, a fake account has popped up to continue to discredit Loomer and is demanding money to be taken down.

IMPORTANT: Laura Loomer tells me this is a fake account. It was created by leftie trolls to make sure she does not get reinstated. What awful people. #FreeLauraLoomer @LauraLoomer pic.twitter.com/M6CJ11e5Ve

The war to keep rightwing views on Social Media (D) is real.

No matter what you think of Loomer, just like when Alex Jones was purged, this is censorship, and for what, exactly? Criticizing the views of a newly-elected member of Congress that won with 78 percent of the vote in her district?

If you can’t ask tough questions about the ideology held politicians, then CNN will have to completely reevaluate its entire business model.