You know how Facebook pretended to care so much about Russian hacking that they cracked down on ‘fake news’? They didn’t.

Herr Zuckerberg denied knowing anything about the Russian attempts to interfere with election 2016.

When Apple’s Tim Cook outed Facebook as trafficking in personal information, Zuckerberg insisted management switch to Android. Then he slandered his critics as being as anti-Semitic.

Tim Cook, Apple’s chief executive, said in an MSNBC interview: ‘We’re not going to traffic in your personal life. Privacy to us is a human right. It’s a civil liberty.’

These criticisms were said to have angered Zuckerberg so much he ordered his management team to only use Android phones, since the operating system has far more users than Apple’s, it was claimed.

It also said the social media giant attempted to smear critics as anti-Semitic or tried to link activists to billionaire investor George Soros, and tried to shift public anger towards rival tech companies.

They were entirely aware of Russia using Facebook for their own political ends. Not only did they do nothing about it, they denied it was a problem.

On Russia, Zuckerberg declared in the fall of 2016 that it was ‘crazy’ to think Facebook had been used to help Donald Trump win the US presidency, but the report said in-house experts knew this not to be the case.

The Times said for over a year Facebook had amassed evidence of Russian activity through an investigation led by its former security chief, Alex Stamos.
Source: DailyMail

And how did they pivot after the election? Facebook ‘corrected’ the problem by cracking down on right-wing media outlets that gave news stories other than the tired old newswire retreads all the big players in ‘mainstream’ news were feeding the public.

Can you guess why the name ‘Cambridge Analytica’ was a household name? Think ‘scapegoat’.

But it was only belatedly that the company’s board was informed of the full extent of the meddling, the Times said.

In 2017, Sandberg reportedly shouted at the security executive Stamos, that ‘you threw us under the bus’, after he told Facebook’s board of directors the company had not yet stamped out Russian interference on the platform.

When criticism of its belated Russia admission grew, Facebook mounted a lobbying campaign led by Sandberg, it was said.

The company used a PR firm to push negative stories about its political critics and make rival companies like Google and Apple look bad, the Times said.
Source: DailyMail

When critics crashed the Congressional hearings with the following image denouncing both Zuckerberg and Sandberg: 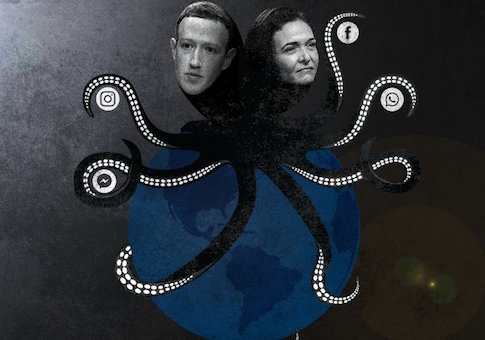 Zuckerberg got the Jewish Anti-defamation league to write it off as racism, not legitimate criticism of Facebook’s invasive privacy policy, or its chokehold on the global information networks.

Sandberg also reportedly argued Facebook should not single out Russia in a public paper it planned to published looking at ‘information operations’ on the social platform, after the company’s Washington-based policy manager that ‘if Facebook implicated Russia further, Republicans would accuse the company of siding with Democrats’.
Source: DailyMail

Facebook was also said to have employed a Republican firm specializing in opposition research to discredit activists, partly by linking them to the liberal investor Soros, who has become a favored target of Trump supporters and far-right conspiracy groups.

Before and since this month’s midterm elections, Facebook has shut down dozens of accounts on its own platform and on Instagram which it said were aimed at influencing the vote, and that it was exploring a possible link to Russia.
Source: DailyMail

This is, admittedly, taken from a Times piece and they are hardly impartial in any matters concerning Russian attempts at meddling, especially if they can undermine or discredit Trump’s Presidency.

But we do know there were Russian attempts to sow discord.

“Russians Staged Rallies For and Against Trump to Promote Discord, Indictment Says” — Fortune

If you’re wondering why people are leaving Facebook ‘like’ rats from a sinking ship, maybe the public is sick of their games and their double talk.

Maybe they’re sick of landing in Facebook jail for speaking their mind.

Or maybe they’re tired of BEING the product that Facebook sells.

Clash Daily closed our account with them on November 1st, and we haven’t felt so free in years. If you want out, come join us on a platform that gives their clients a ‘bill of rights’.