What is it they REALLY mean by ‘count every vote’?

Count every ‘valid’ vote is not the same thing as counting ‘every’ vote. Because some votes are bogus.

And if you count bogus ballots, what you’re REALLY doing is disenfranchising citizens with the real authority to cast a ballot.

Not that such an issue seems to bother Democrats (even ‘journalists’), seeing how they oppose Voter ID, and the places that create the biggest problems tend to be those under the control or oversight of Democrat machinery.

there's a grain of truth in every joke#StraightTalk #RealTalk pic.twitter.com/F1iZqytBqb

You too, Palm Beach.

Yikes, this stuff is beyond parody:

Chairman of the Palm Beach County Republican Party Michael Barnett attests to the validity of the transcript. He told The Federalist that several Republican lawyers and party officials heard the back and forth between the canvassing board and attorney’s from the Gillum and Nelson campaigns.

“I would think this is something we could all agree on—that non-citizens shouldn’t vote, but evidently that’s not the case with Democrats,” Barnett said. “It’s really sad that we are having to deal with this in a close election. It just goes to show the depths they will go to in order to win.”

The canvassing board was tasked with reviewing ballots after irregularities were reported in Broward and Palm Beach counties. As of Friday afternoon these were the only two counties in Florida that hadn’t completed counting absentee votes. Broward had also failed to report early voting ballots, which is a violation of state law that requires local canvassing boards to report all early voting and absentee results to the state within 30 minutes after the polls close.
Source: Federalist

Here’s the transcript they were discussing: 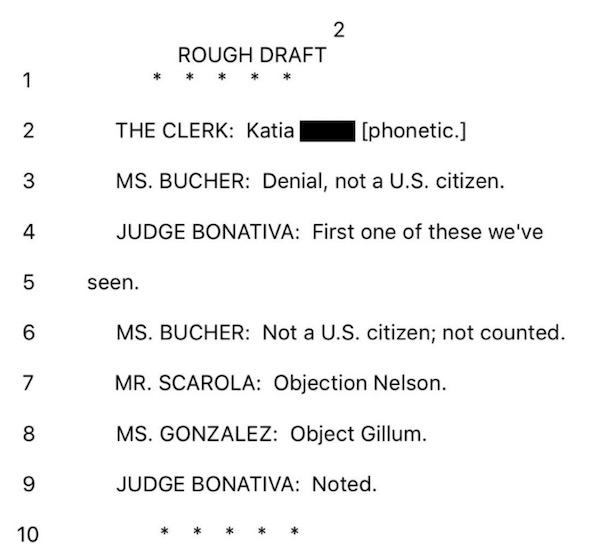 For all their hand-wringing about Russian Collusion, where is their outrage about voter irregularities here at home?

Is the refusal to purge the voter list a deliberate attempt to make it hard to hide irregularities where there are more ballots than eligible voters?

Here are a few other ‘interesting’ voter stories that have popped up.

How many irregularities do we need to see before this looks like a pattern?

Boxes of ballots found in the back of a freaking rental car?

In Broward. (Of course it was.)

Over 60% of Michigan counties had more registered voters than citizens

This same irregularity occurred in 76% of states and 15% of U.S. counties

Law Enforcement that has been hesitant to enforce voter law…

Our campaign is working! @realDonaldTrump pic.twitter.com/jBYyPeXcgD

And this poll worker:

My family in CA has been getting ballots in the mail for my parents who are dead. They destroyed the@, but how many others have been getting them and using them to vote. You just have to check a box that says mail my ballot annually. Crazy

Who needs PUTIN to mess with our elections, if we have power-mad politicians willing to do so themselves.