Yet again, Hillary has taken an interview with the FOREIGN press to blast President Trump.

So much for that policy of politics ending at the water’s edge that was supposedly a ‘good thing’ under Democrats, but inevitably lies forgotten whenever a President has an (R) after his name. You know, the one Huffpo so helpfully cited during Obama’s Presidency:

To me, “bipartisan foreign policy” means a mutual effort, under our indispensable two-party system, to unite our official voice at the water’s edge so that America speaks with maximum authority against those who would divide and conquer us and the free world.
Source: Huffpo

But here we are now, having not one, but TWO former Secretaries of State actively undercutting the legitimacy of the duly-elected President on the world stage. Clearly, Democrats are not bound by any sense of fairness, decency or (it would seem) National Interest.

Kerry was telling Iran to ‘wait Trump out’. Not to be outdone, Hillary is on an international anti-Trump PR campaign. (Even Obama has been chiming in.) Imagine the outrage of Acosta and the other Media(D) flunkies if Dubya & Co. had done the same to Obama?

Let’s take a look at how she’s undercutting the President… THIS time.

Keep in mind, what comes next is from the same woman that chortled after she said of Ghadaffi: ‘We came, we saw, he died‘. The quotes that follow come from the exclusive interview she gave to the Guardian:

She is trying to tell the press (many of whom have DEEP liberal ties, some of whom have even worked for the Clinton and Obama White Houses) how to do their job in covering Trump.

Hillary Clinton has criticised the US media over its coverage of Donald Trump, calling on the press to “get smarter” about holding to account a president who is a master of diversion and distraction.
…
He is too often left unchallenged by the press.

Is she trying to politicize and direct the ‘free press’ against her political rival? (‘Weaponize’ even?) Because that would be a strange tactic for someone accusing the ‘other guy’ of being dangerously authoritarian.

She complained that the press was “too” interested in being ‘balanced’. (Maybe she didn’t read that Harvard study about the press being more than 90% negatively biased against him, looking more at ‘scandals’ than policy.)

Clinton pointed to research into fascism by the former US secretary of state Madeleine Albright. She said the analysis had shown “various populist, rightwing, fascist, authoritarian movements and leaders destroy a common base of fact and evidence, creating an ‘alternative reality’.”

Really Hill? One of the dictionary sites that hasn’t scrubbed its definition of ‘Clintonesque’ to mean something friendlier to the Left still has the OLD meaning posted (your buddies obviously missed this one): “Using language as a tool of deceit, Clever obfuscation, using language to avoid candor and truthfulness, intending to confuse by clouding an issue.”

The Clinton name is literally synonymous with deceit. That old joke about ‘look up lying in the dictionary and you’d see their face’? It’s actually true about the Clintons. You should probably sit this one about ‘alternative reality’ out, Mrs “Sniper Fire”… whose husband can’t even define “is”.

We’re not even up to the ‘good part’ yet.

She also accused Trump of racism. “This is a person who believes in very little, but he does have visceral responses to what goes on in the world around him. He does have a strong streak of racism that goes back to his early years,” she said.

“I include his anti-immigrant tirades because he characterises immigrants in very racially derogatory ways, but he was Islamophobic, he was anti-women, he really had the whole package of bigotry that he was putting on offer to those who were intrigued and attracted to him.

“He was, from the very first day of his campaign, raising the spectre of criminal immigrants and the like. So the anti-immigrant piece coupled with things that he said, the kind of people who supported him, former Ku Klux Klan members and the like, the message that we called the dog whistle, was incredibly loud. It was: ‘I’m on your side because I don’t like the same people you don’t like. Or at least I’m going to say I don’t and that counts for something.’”

Rather than go into her many policy flip-flops, let’s look at her core accusation of racism.

Trump’s streak of racism? Fact-Check: False. If Trump’s A ‘Racist’ Then Why Did He Get This Award And Say The Following?

Until there was an (R) after his name, there were no such accusations. How interesting. And if he WAS so damnably racist, why were she and Bill happy to hang out with him… hmmmm? She seems relaxed enough in his company when this photo was taken: 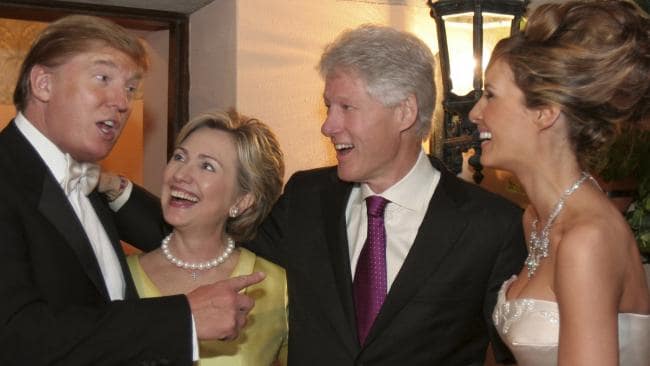 But let’s look at the accuser herself: this is Hillary’s Mentor, whose funeral all the big-shots on the Left attended. 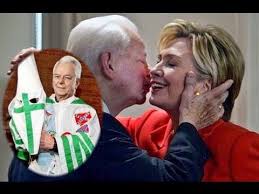 Does this newfound war on racism mean she’s finally ready to denounce Farrakhan as a no good racist scumbag? Nah. Too many Democrats have been seen kissing his ass.

Because that doesn’t square very well with the traditional values of America’s E Pluribus Unum.

Yeah, maybe she should sit the question of ‘racism’ out, too.

In fact, how about she does the whole nation a favour: find a rocking chair somewhere and spend her ‘golden years’ in relative obscurity?

That would be nice, wouldn’t it?

Or she can run again… and lose again.