Rapper Talib Kweli — who has over a million followers on social media — really doesn’t like President Trump.

And like so many knee-jerk Trump haters, he went straight to the Hilter card.

Problem is, his sad attempt to slap down Trump looked a little like this guy:

The only person his tweet got a clean hit on … was himself. 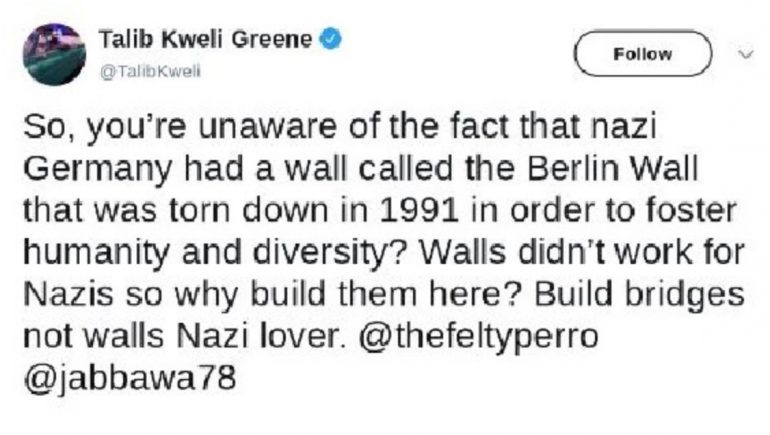 He’s since deleted the tweet. It got a LOT of attention.

Nazis — so far as regimes go — died with the fall of the Third Reich in 1945. The Berlin Wall was built AFTER Germany was split into East and West. That, as we all know, was after the conclusion of WWII.

The wall was built by the SOVIETS in August of 1961. Soviets and Nazis are both bad news. But they are hardly the SAME noxious ideology.

Last we checked, 1961 came 16 years AFTER the collapse of the Third Reich, right? And worse yet, he’s trying to use this example to slam Trump’s Border Security wall. Trump is trying to prevent unlawful entry into America, forcing would-be entrants to use the ‘front door’ instead of climbing in over the garden fence, so to speak. The Berlin Wall, on the other hand, was guarded by East Germans to keep them from escaping their own country and defecting to the freedom of the West. It was to Imprison them in their own country — to keep them in.

Dude has a strong case to go back to whatever school he attended and insist upon a refund. He can use his own tweet as evidence in his favor.

Looking at his timeline, it seems the rapper can hardly make a single tweet without accusing someone of or complaining about ‘racism’.

He meets a ‘racist’ every day, so… what does that tell you?

Besides the fact that he’s one of the Orange Man Bad crowd that hates the President?