An outfit that would get praise on most Western Red Carpets just landed an Egyptian Actress in jail.

At what point will the Left figure out that the tradeoff for playing the enabler to Islam is a serious restriction of the very freedoms they take for granted?

Yet another in a long series of examples is the case of Rania Youssef.

Who is Rania Youssef? She’s an Egyptian actress, or at least, she was, until she wore the ‘wrong’ dress out in public.

While attending the Cairo Film Festival, she wore this dress: 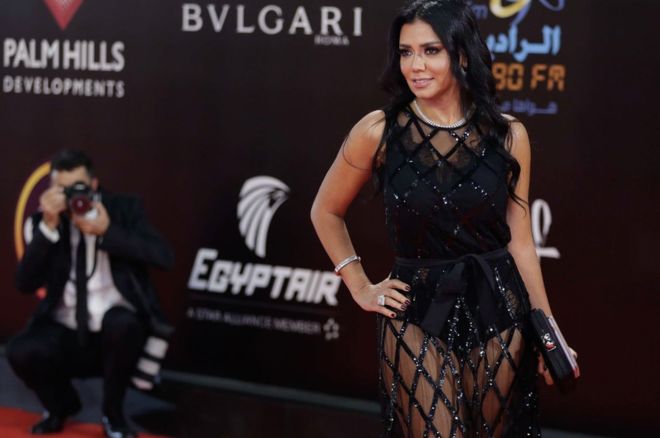 And now she’s paying a price. If convicted, she could face five years in prison.

Five years. For wearing a dress that would be described as ‘modest’ by Hollywood standards.

The charges were brought by two lawyers Amro Abdelsalam and Samir Sabri, who are known for taking celebrities to court.

The Egyptian Actors’ Syndicate also criticised the “appearance of some of the guests”, which it said “undermined the festival and the union”.

In a social media post, the actress said she had “probably miscalculated” in choosing to wear the dress.

“It was the first time that I wore it and I did not realise it would spark so much anger,” she said.
Source: BBC

Those who tell us relentlessly that all cultures are equally good (except America’s, which is pretty much worthless) will need to explain why Egpyt — which embraced the Arabic Spring that Obama cheered for — sends people to jail for wearing a dress that would seem almost Puritanical by Hollywood standards.

They can finger-wag about oppression and “Handmaid’s Tale” all they like, but in reality, oppression like that isn’t found in America… you’d have to look to foreign shores to find it.