If Joy Behar was looking for sympathy over Kid Rock calling her a B*tch, she’d didn’t find much.

In fact, Sarah Palin took a jab of her own and took her to Truth City in the process.

While on Fox And Friends, Kid Rock was talking about being less partisan, and loving everyone. He threw a joke in there by adding … ‘except for Joy Behar’.

Here’s Kid Rock’s statement about what he said:

“Behar has been an outspoken critic of President Donald Trump, and when myself, Sarah Palin and Ted Nugent visited the White House last year, Behar called it ‘the saddest day in the history of the White House since the British burned it to the ground in 1814,’” Rock said in a statement released later on Friday. “Today I said ‘Screw that Joy Behar b—h.’ Mess with the bull, you get the horns. End of story. I apologized for cursing on live TV, I will not for my sentiment nor do I expect an apology from her or anyone else who has choice words for me or doesn’t like me. God Bless America.”
Source: BreitBart 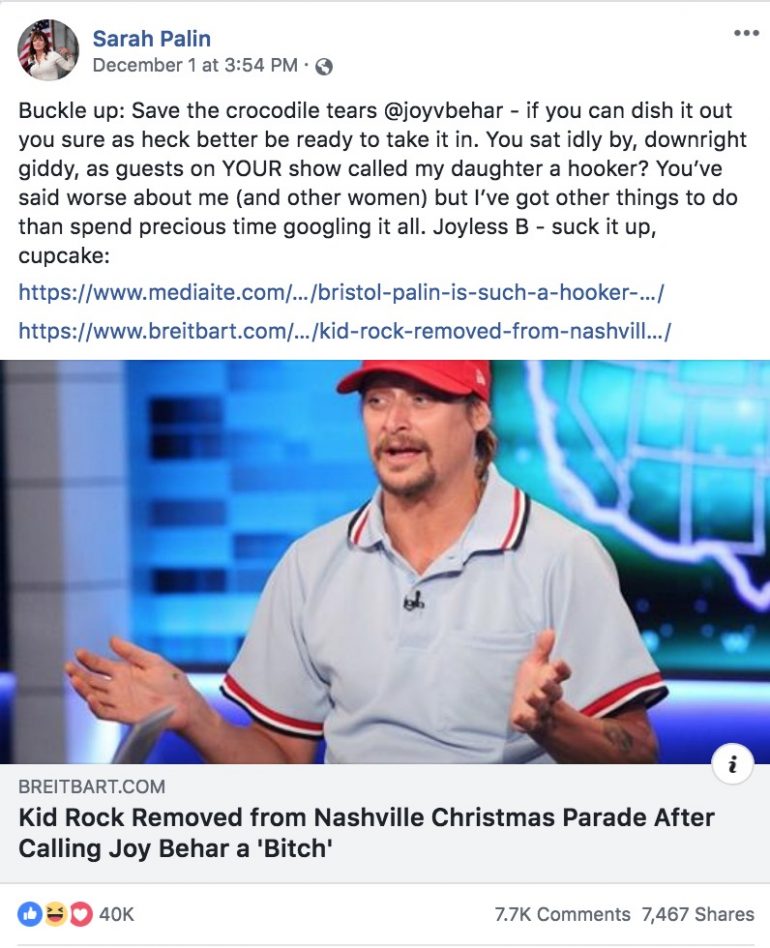 If you’re reading this on a device with a smaller screen, here’s the text from the image:

Buckle up: Save the crocodile tears @joyvbehar – if you can dish it out you sure as heck better be ready to take it in. You sat idly by, downright giddy, as guests on YOUR show called my daughter a hooker? You’ve said worse about me (and other women) but I’ve got other things to do than spend precious time googling it all. Joyless B – suck it up, cupcake:

Maybe if Behar wasn’t a perpetual 5-alarm dumpster fire, she wouldn’t make such an easy target.

The Great SPIRITUAL Reset
May 6th, 2021 Sons of Liberty Media