To hear the Media(D) tell it, Trump is the Grinch personified. Could they POSSIBLY be manipulating this story for their own ends?

The Media(D) are so very noble and honest — just ask them, they’ll tell ya!

Trump axed a stupid event, and the Media think its the end of the world.

Even Fox described it this way:

President Trump has canceled the White House holiday party for the media, making the decades-old tradition a victim of his increasingly contentious relationship with major news organizations.

The annual Christmas-season gathering was a significant perk for those covering the White House, as well as other Washington reporters, anchors and commentators, and New York media executives would regularly fly in for the occasion. At its peak, the invitation-only soirees grew so large that there were two back-to-back events, one for broadcast outlets and one for print organizations.

Journalists who attended the events, which featured a catered buffet of lamb chops, crab claws and elaborate desserts, got to roam the decorated mansion with a spouse or other family member, a friend or a colleague, adding to the invitation’s allure.

But the biggest fringe-benefit was the picture-taking sessions, in which the president and first lady would patiently pose with guests and briefly chat with them in front of a Christmas tree, with the White House sending out the photos — copies of which were invariably sent home to mom. This would take a couple of hours, with long lines snaking across the building’s first floor. Bill Clinton even posed for pictures with journalists days after he was impeached.

…When Democrats have been in the White House, more liberal commentators have gotten invitations, while more conservative pundits have shown up during Republican administrations.

Some critics questioned whether those who cover or comment on the White House should engage in such socializing, but few turned down the invitations. Many Trump supporters who view his coverage as unfairly harsh will undoubtedly welcome the president’s decision to exclude the media establishment, at least for this year.
Source: FoxNews

Now they’re not going to get fancy meal on the taxpayer’s dime. What a damn shame. 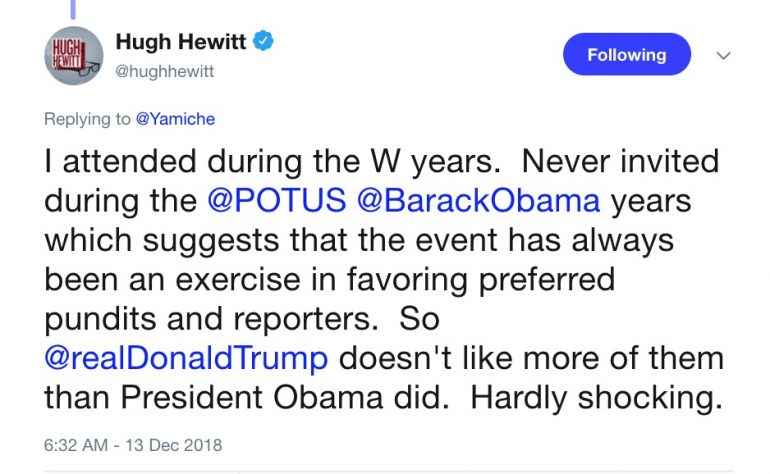 Call us crazy, but is the same Free Press that’s so taken with their own importance that they’ve cast themselves as Time’s Person-Of-The-Year?

They’re Independent, right? If they’re such intrepid gumshoe journalists, why would they even WANT any White House Perks?

Wouldn’t that make them just another DC political parasite (or, if you prefer ‘swamp rat’) desperate to measure their own importance by how close the can get to the truly powerful people? Isn’t that the OPPOSITE of the undergirding principles of a Free Press?

Read it again: journalists FLY IN to DC for this buffet. It got so big that ran over two nights just to accommodate the crowds.

Is there ANY buffet in the world that tasty? No, it’s about the prestige of being at that address and on that guest list and getting a photo op with the very same political family most of these journalists wouldn’t cross the street to spit on if the Trumps were on fire.

“Free” Press indeed. We saw them the night Hillary Lost. There’s not the slightest doubt about whose pocket they are REALLY in.