There is a very real irrational hatred of all things traditional and Christian. Here’s yet another of a long list of examples.

For most groups, observant Jews, Buddhists, and Hindus for example, there’s no particular ax to grind with the fact that ‘someone out there’ disagrees with you.

It’s enough to have your own opinion, traditions or set of values. You might disagree with other people, or even get in an impassioned debate if the topic comes up. But you don’t lose any sleep over it, right?

That’s not true of everyone. Even the knowing about the existence of traditional Evangelical Christian belief (or even orthodox Christian belief more generally) offends some so deeply that they feel a need to single it out and rail against it.

The very existence of someone disagreeing with them offends them. What does that look like? Here’s an example:

ANNOUNCEMENT: I'm inviting women to mail in their purity rings for a massive art project. @SweetBirdStudio is collaborating with me to melt them into a sculpture of a vagina, click here to join in and get your certificate of impurity! https://t.co/tbaJJdbxeJ #shamelessbook

Oh no! There’s a group of devout young women who decided they don’t care for the idea of transactional sex? They think they could be better off waiting for some guy who values them enough to marry her first?

Of course every OTHER choice regarding sex is culturally valid. Just not the monogomous kind.

So a ‘Feminist Pastor’ has decided her own values are more valid than the personal convictions of strangers she’ll never meet. How ‘tolerant’ of her.

What’s a purity ring? It’s just a ring that a young lady wears as a reminder to herself that even when passions rise in the heat of the moment, to remember the ‘bigger picture’. Said succinctly in one of their slogans, “True Love Waits”.

Whether you think that strategy is able to accomplish its objective or not is certainly something that could be debated. But the reaction by this ‘Feminist Pastor’ seems a little extreme:

She’s called to have them mailed in and melted down into a sculpture… of a vagina.

As Paul Bois noted, it has curious echoes of the Golden Calf scene in the Book of Exodus (Think Charlton Heston’s ‘The Ten Commandments’).

What do they get for sending their ring to be melted down? A ‘certificate of impurity’. No really, this isn’t The Onion. Here’s a picture: 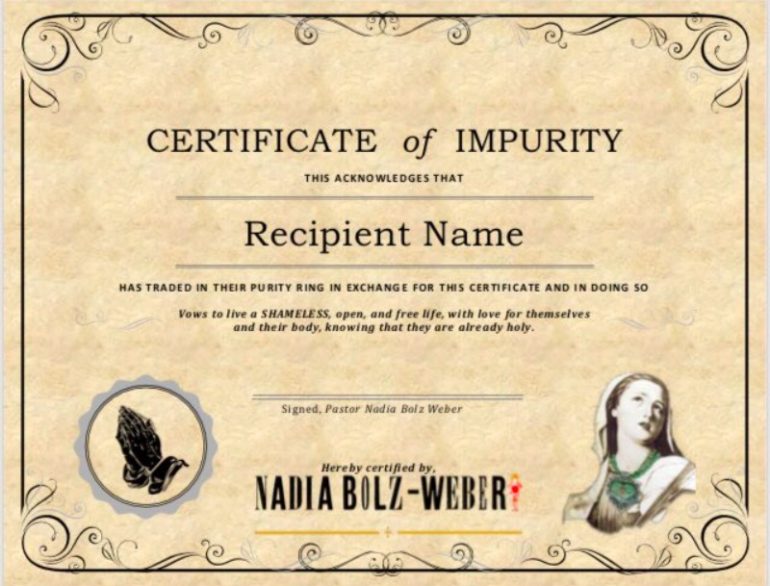 More about the statue in a moment. They don’t JUST get the certificate.

They get a replacement ring, too. One that looks like a vagina. It’s called the ‘Impurity Ring’. Get it? They hate the abstinance movement so much that they had to make a copycat movement. Probably because they have no real ideas of their own.

Why the hell would anyone ‘pastor’ bother doing this? It’s performance art, railing against the sacred. She’s a Liberal Lutheran pastor with a not-so-subtle agenda:

…Bolz-Weber, founding pastor of Denver’s House for All Sinners and Saints, issued a call for people to send her those rings “for a massive art project.”

“Beginning November 12th, until December 17th, you’ll have the opportunity to send in your purity rings to be melted down and recast into a golden vagina,” she explained on her website. “This sculpture will be unveiled at the 2019 Makers Conference.”

The website states that those who send in their rings will then receive a “certificate of Impurity as well as a SHAMELESS, impurity ring.”

…“This thing about women that the church has tried to hide and control and that is a canvas on which other people can write their own righteousness ― it’s actually ours,” Bolz-Weber told HuffPost. “This part of me is mine and I get to determine what is good for it and if it’s beautiful and how I use it in the world.”

…Earlier, she sparked controversy after she said there should be no shame in consuming pornography, especially if it is “ethically sourced.
Source: Christian Post

Clearly, she’s not given much thought to what Jesus said in the Sermon on the Mount. That ‘already holy’ line in the certificate was a dead giveaway.

Real Christianity is expected to change culture not conform to it. But of course, a call to repentance and the Holiness of Christ doesn’t sell books, does it?

Bolz-Weber is just one more in a long line of people who want the form of religion, but want to gut it of all meaning. Just like Liberalism has done to every other traditional institution it sinks its hooks into. It is, at root, parasitic.

That explains her focussed hatred for traditional Christianity and it’s values.

They are a mirror reminding her she’s an imposter playing at being the real deal. If ‘Purity rings’ inspired a golden calf — er, vagina — just wait until she hears about this book.

She’ll be organizing a book-burning next.