Naturally. Because that’s ‘obviously’ the MOST offensive content playing on the radio.

The Bah-Humbug crowd has moved on from being offended at Silver Bells and are now complaining about the song “Baby It’s Cold Outside”.

We’ve been hearing that one in the rotation a lot lately. Why?

Because in the push to remove any trace of the Sacred from Christmas music (demoting it to mere ‘holiday’ music) there are only so many seasonal secular songs to choose from.

While you might debate whether this one truly belongs in the rotation with actual “Christmas” favorites, it has — because of the winter imagery — found its way into the category.

It’s still better than some of the other ‘Christmas’ schlock out there. Some of us would rather be “boiled in our own pudding, and be buried with a stake of holly through our heart” than hear George Michael’s “Last Christmas” or (almost as bad) the endlessly repetitive “Wonderful Christmas Time”.

At least “Baby It’s Cold Outside” tells a fun story about the ageless interactions between a guy trying to make a play for a girl, and the girl who — although interested — doesn’t want to give in to his charms too easily.

It’s a story as old as time. And Feminists feel the need to stomp it out. The full meaning, of the song is captured in these classic movie clips that play with the concept a few fun different ways:

Gutless Canada, not surprisingly, has joined an outright ban on the song.

Bell Media which runs two 24-hour stations in Ottawa and Vancouver has no plans to return the tune to the airwaves, according to spokesman Scott Henderson.

Rogers Media, which runs Christmas-themed stations 98.1 CHFI-FM in Toronto and 98.5 CIOC-FM in Victoria, also switched up their rotation. Spokesperson Caitlin Decarie didn’t say why but mentioned there are plenty of other tunes to enjoy at this time of year.

‘There are so many wonderful songs that celebrate the holiday season,’ Decarie said.

…’While we consider both points of view, and in light of the times we are living in, we have chosen to remove the song, for the time being, from two of our holiday music streams.’
Source: DailyMail

The radio station in Cleveland is (if it can be believed) even MORE gutless. They’re unwilling to make an unpopular decision, so they’re putting it up to a vote.

So much for all the left’s bragging about being ‘sex-positive’, eh? They’re fine with the idea of Tinder, but somehow this song crosses the line? 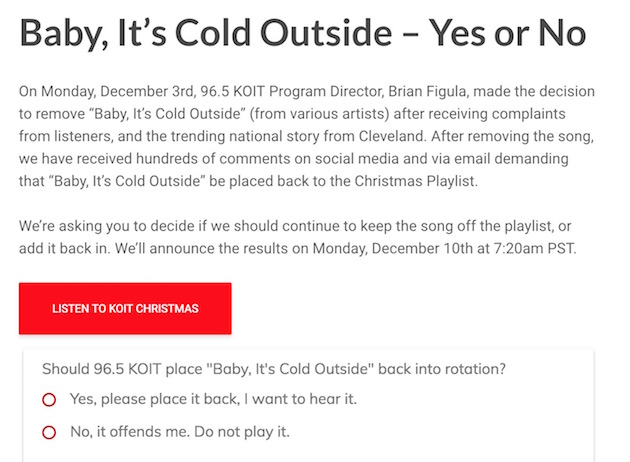 These are the kind of spineless lemmings that go to a restaurant and only ever order the ‘House Special’.

… just WAIT until they hear about this thing called RAP music.

5 Massively Deceptive Headlines By The Mockingbird Corporate-Owned Media To Cover Up Israel Killing Children In Gaza
May 13th, 2021 Sons of Liberty Media