Is this what headlining in Vegas for 17 years does to a person?!? Yikes.

The Just Dance singer, 32, was on just the third night of her first ever Vegas residency at the Park Theatre in the Park MGM Resort, when the musical icon, 50, showed up to enjoy the show.

Enjoy the show she did.

Nobody — and I mean nobody — had more fun at the Lady Gaga concert than Celine Dion.

Celine proved to be a huge fan of the Poker Face songstress, as she put on an exuberant display, dancing and singing out loud to Gaga’s greatest hits with no inhibitions.

She could be seen energetically busting moves, fist-pumping and dramatically throwing her arms in the air with sheer delight.

Clad in a long-sleeved shimmering mini-dress, a gleeful Celine looked sensational as she clapped along to Gaga’s pop tunes.

It was, er… something to behold.

Lady Gaga brought attention to the presence of Dion at the concert and thanked her for her support. She then told the crowd about how the Canadian singer prayed with her and her crew backstage before the show.

Lady Gaga said: ‘That is how amazing she is. When she was asked if she had any advice for me in Las Vegas, she said I didn’t need it because I was strong and I knew what I was doing.

‘And, oh my God, I swear to you, the number of women that I can count on one hand that are supportive in this industry, it’s like I would lose fingers, okay? You are amazing.’

Lady Gaga gives a shoutout to Celine Dion at #Enigma tonight and dedicates "You & I" to her! pic.twitter.com/w8WiaSX48H

Dion is ending her 17-year run as a Headliner in Las Vegas this June. She has performed 1089 shows since she began in 2003. She’s been credited as ‘changing the landscape of entertainment’ in Vegas. Perhaps she’ll now focus on changing the landscape of the audience. Or, perhaps she’s going to focus on her incredibly creepy ‘gender-neutral’ clothing line for children, CELINUNUNU.

Celine’s final run of shows will kick off on October 30 and she previously admitted to feeling ‘mixed emotions’ about ending the current chapter in her career.

She said: ‘I definitely have mixed emotions about this final run. Las Vegas has become my home and performing at the Colosseum at Caesars Palace has been a big part of my life for the past two decades.

‘It’s been an amazing experience and I’m so grateful to all the fans who have come to see us throughout the years. Every show we do at the Colosseum throughout this fall, and right up until the final one, will feel very special.’

Dion posted a video of herself going ga-ga for Lady Gaga at the concert: (Sorry guys, I couldn’t resist.)

Lady Gaga posted a little love back at Celine on her Instagram stories: 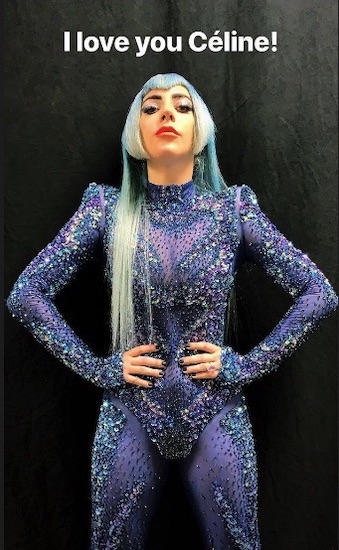 Imagine if other women were treated so nicely in the press — especially a lady that’s around the same age as Celine Dion but behaves with a little more… how shall I say it… decorum?